Was Taylor Swift Shamed Into Donating $250K To Help Kesha? 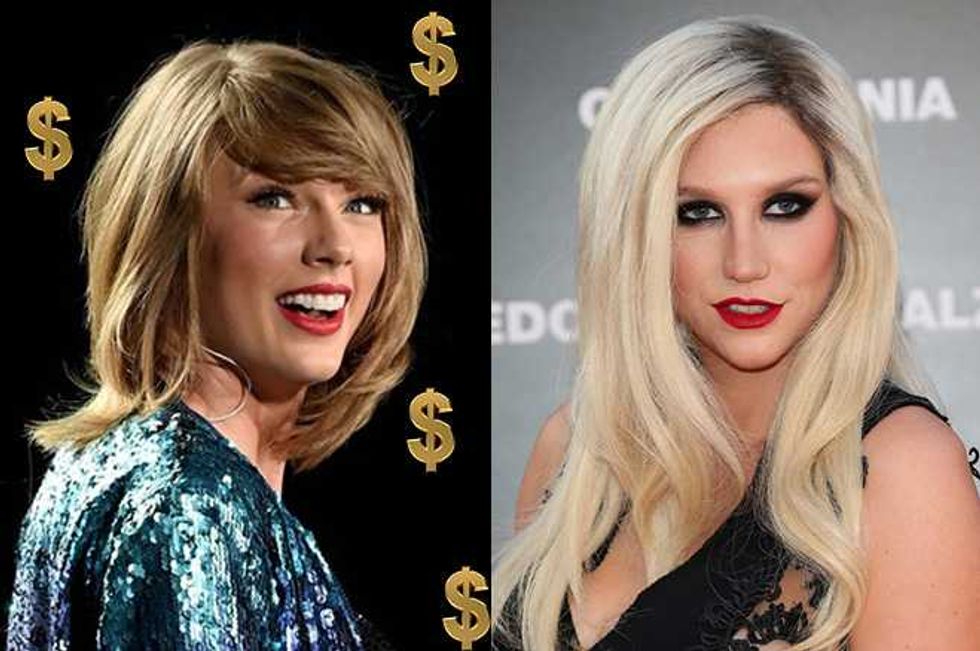 Taylor Swift has belatedly joined Kesha's fight to leave her producer Dr. Luke, with a 'donation' of $250,000, according to Swift's spokesperson.

In a show of support, Taylor Swift has donated $250,000 to Kesha to help with any of her financial needs during this trying time.

That's nice, making it all about Taylor.

Prior to the announcement, Swift had not posted or tweeted any support for Kesha, who has spoken openly about her sexual and emotional abuse by Dr. Luke. While peers like Lady Gaga, Lorde, and Ariana Grande have been speaking out in support of Kesha, Swift is the first to announce a monetary donation.

Why the sudden interest and generosity?

Earlier on Sunday, Demi Lovato tweeted her support for Kesha and may have been calling out Taylor in her frustration with so-called feminists failing to speak out in Kesha's defense.

As reported by stuff.co.nz, Lovato also 'liked' a post which read:

Is Taylor ever going to speak on #freekesha or is feminism purely a defense mechanism for her?

Oh well. Better late than never, eh? Even if she had to be shamed into it, the money will help.

Or as Kanye would put it, 'Look how nice that nice Fake Ass Taylor Swift is!! 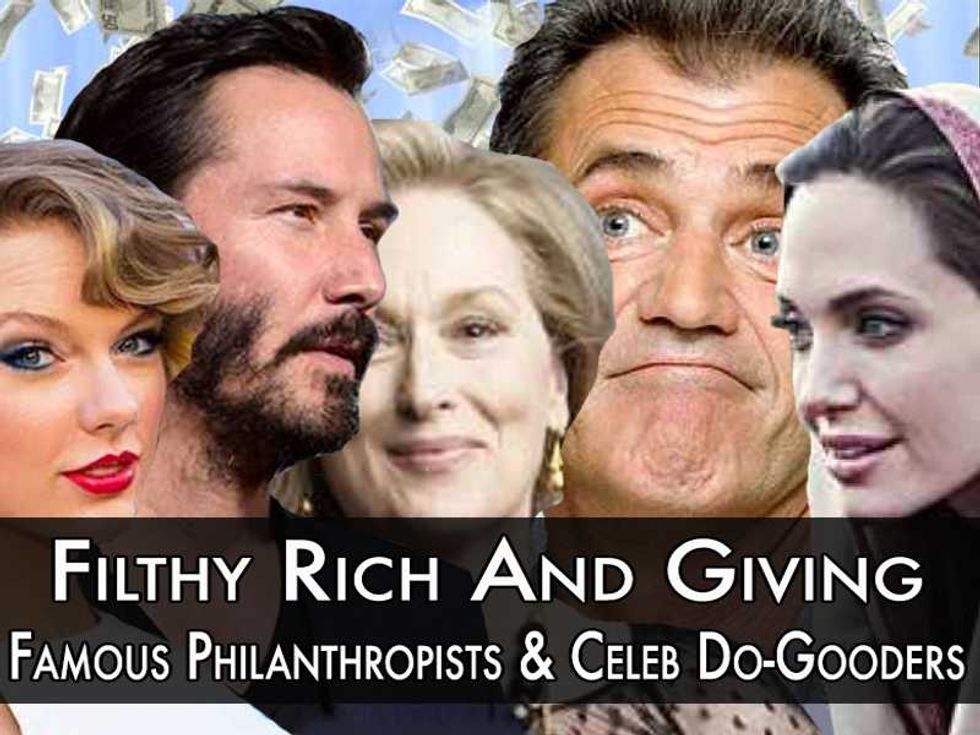 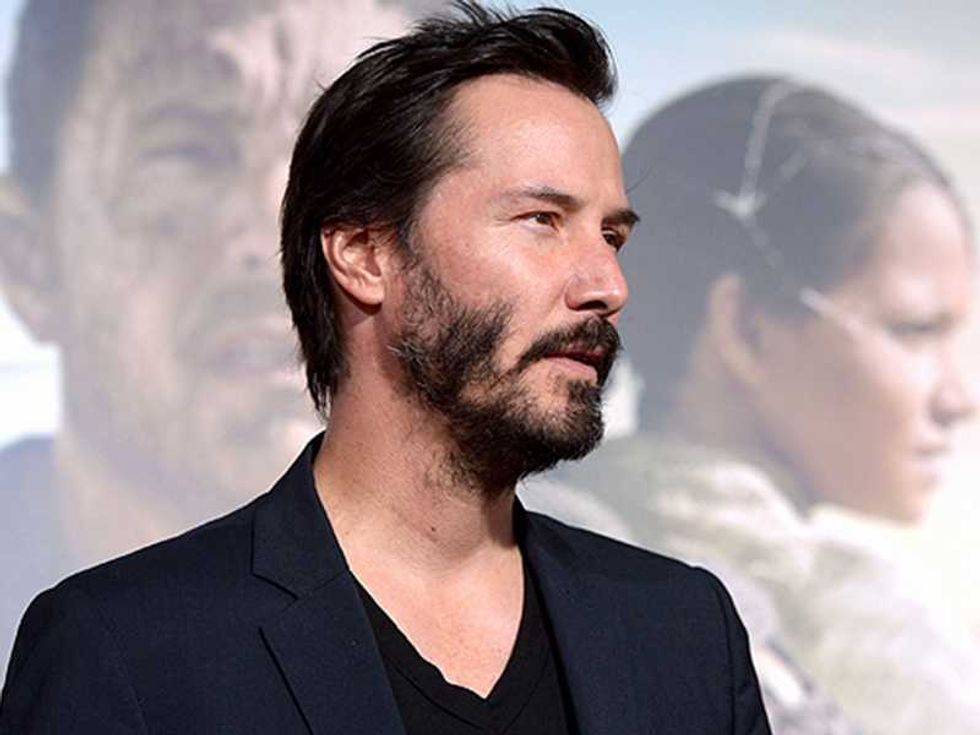 Previous Next
Keanu Reeves—The 51-year-old is known as the nicest guy in Hollywood, for a very good reason. In addition to donating millions of dollars to various causes he supports, he is also purported to have a private cancer foundation that does not have his name attached—preferring to donate his money without taking any credit for it. Then there are the slew of stories from cast and crew members who have worked with Reeves on past movies—ranging from him taking a 90 % salary cut in order to free up the money to also cast Gene Hackman, to insisting $75 million of his Matrix sequel earnings go to the visual effects and costume design crew instead of him, as the movie wouldn’t have been successful without them. 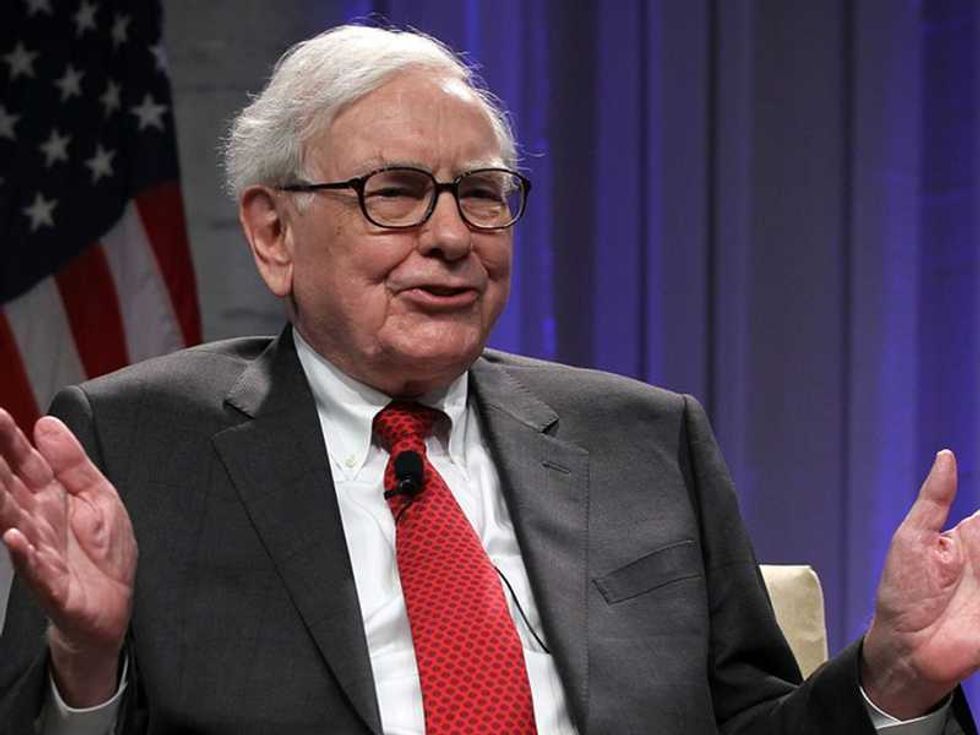 Previous Next
Warren Buffett—Mr. Buffett has given billions to various humanitarian efforts through organizations such as the Bill & Melinda Gates Foundation, which aims to reduce poverty and raise health care worldwide. Buffett has vowed to donate pretty much all of his fortune to causes that he views as worthwhile... 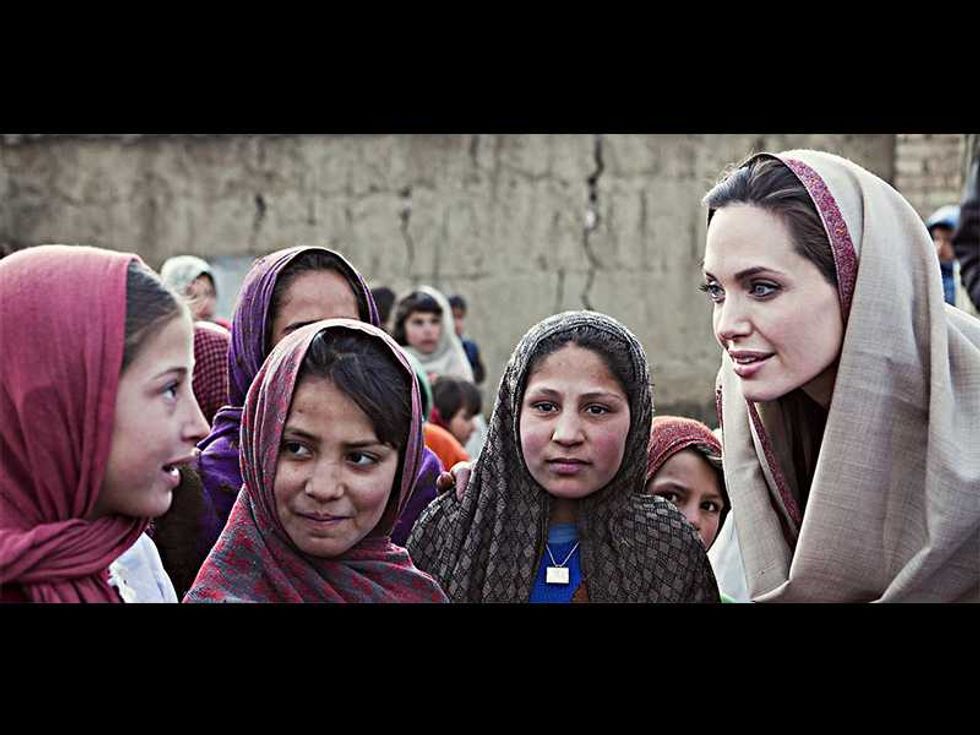 Previous Next
Angelina Jolie—When she’s not acting and directing, or being mom to her six kids, Mrs. Brad Pitt is usually to be found somewhere around the world working hard to further one of the various causes close to her heart. The Special Envoy for the UNHCR, received an honorary damehood from the British Queen for her humanitarian efforts, which include work in the areas of conservation, education, and women’s rights, in addition to her UNHCR refugee advocacy work. Jolie also puts her money where her mouth is though, donating millions to various causes via her and Brad’s Jolie-Pitt Foundation. 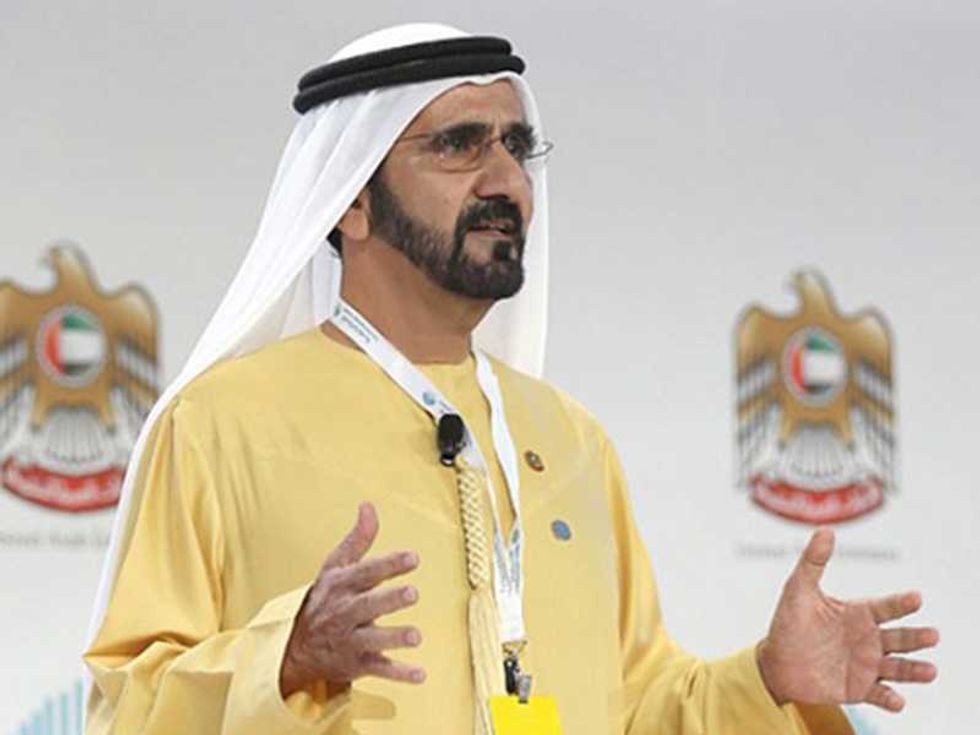 Previous Next
Mohammed bin Rashid Al Maktoum—Maktoum is the Prince of Dubai—so, yeah, he’s rich. Sheikh Mohammed set up the Dubai Humanitarian City in 2007, which is the world’s largest logistics hub for humanitarian efforts, used by UN aid agencies and some 50 NGO and commercial operators. Maktoum has allocated $10 billion of his vast fortune to set up the Mohammad bin Rashid Al Maktoum Foundation, which is dedicated to bringing the level of education in the Middle East up to that of levels in the Western world. 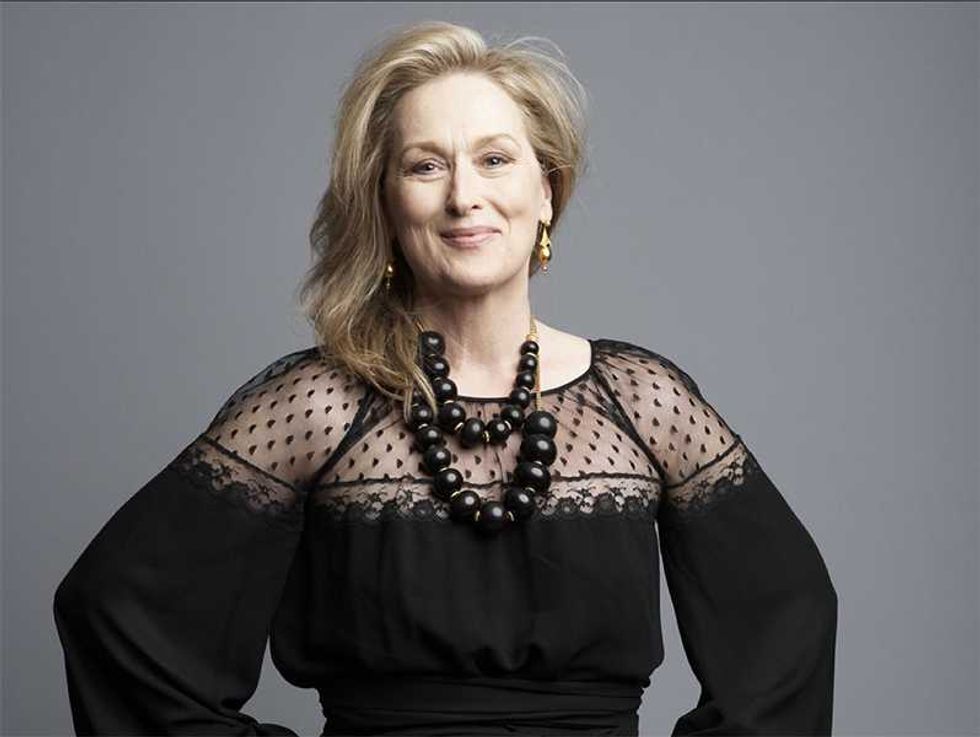 Previous Next
Meryl Streep—the actress and her husband, Donald Gummer, give to those less fortunate via their organization, Silver Mountain Foundation for the Arts. The couple donated $2 million of their own money in one year alone to the foundation, which issues grants to Oxfam America, Partners in Health and Vassar College amongst other needy causes. 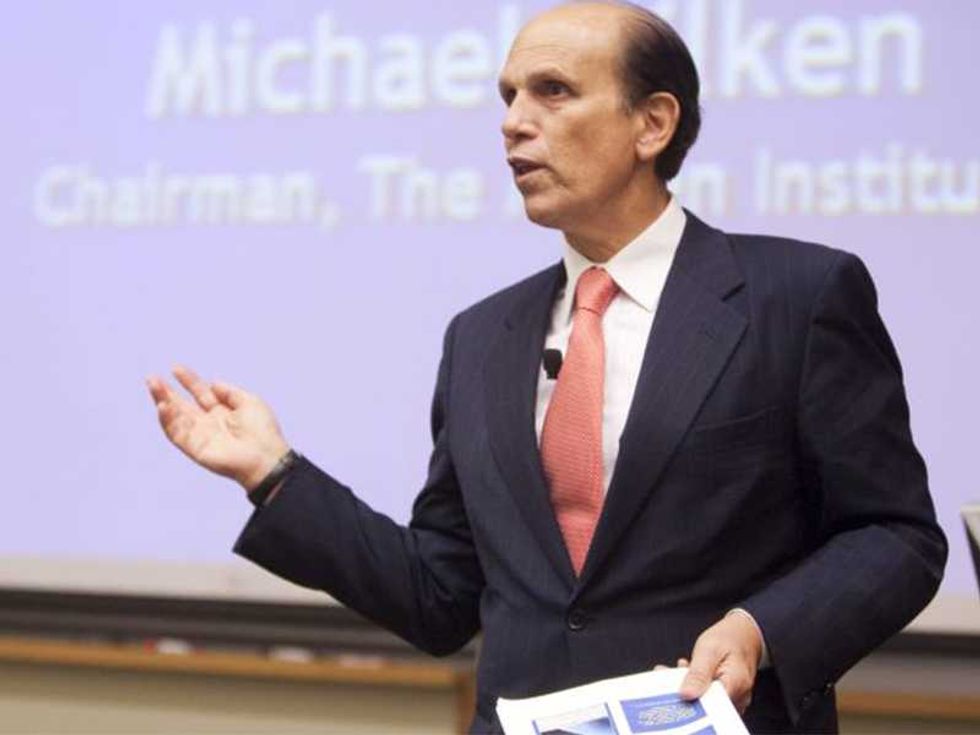 Previous Next
Michael Milken—Milken is often cited as being the epitome of 80s Wall Street greed…but the former financier, who served 2 years for fraud and racketeering, is also a prolific philanthropist. Milken and his brother have donated millions to medical research and education courtesy their foundation. Following his release from jail in 1993, Milken set up the Prostate Cancer Foundation, which has since become the largest philanthropic source of funds for research in prostate cancer (which he was diagnosed with the month of his release). 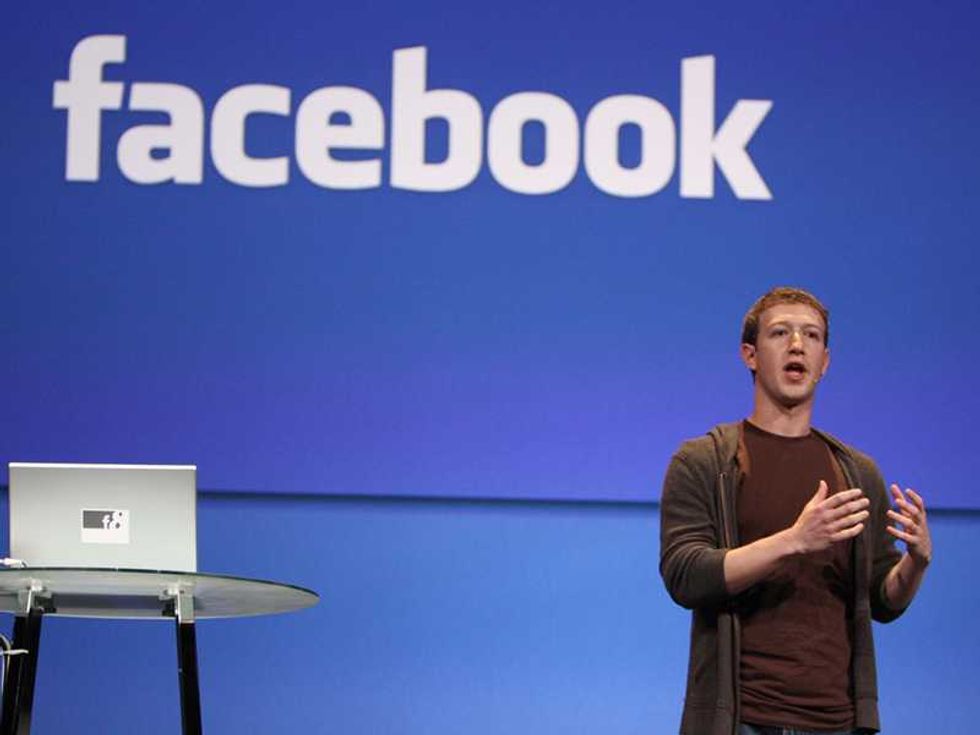 Previous Next
Mark Zuckerberg—The 31-year-old Facebook billionaire has signed a promise called The Giving Pledge (along with Warren Buffett and Bill Gates) vowing to give away more than half of his wealth to charitable causes. With that aim in mind, Zuckerberg has already donated a chunk of his $38.6 billion estimated fortune to a variety of causes he deems worthwhile—including, a whopping $990 million in Facebook shares to the Silicon Valley Community Foundation…. 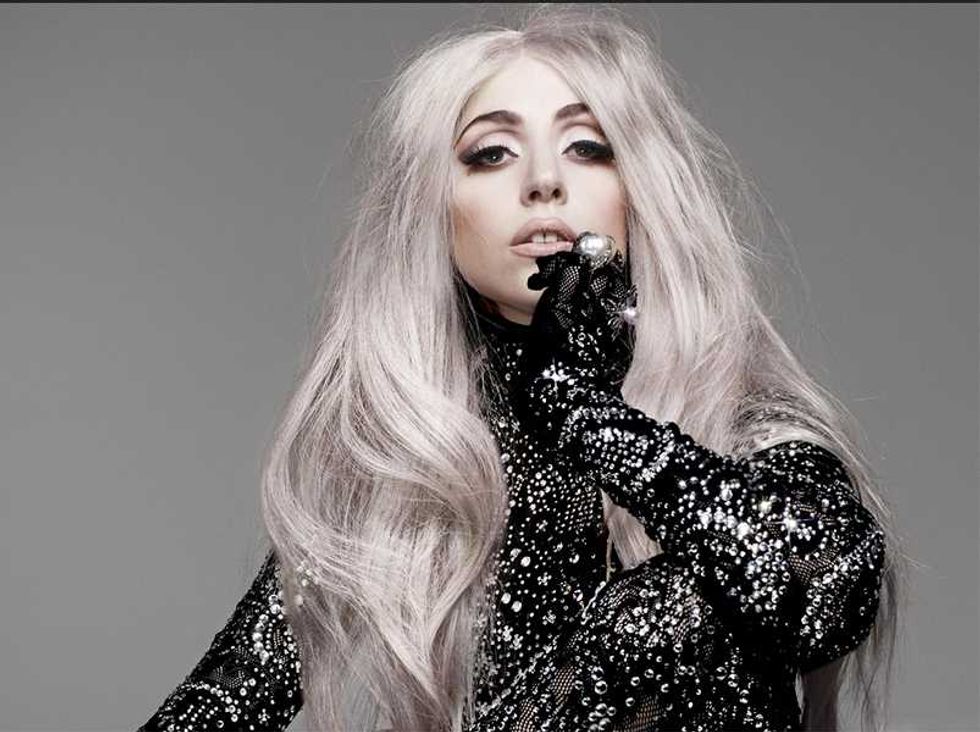 Previous Next
Lady Gaga—The singer is big on LGBT issues and a very vocal advocate for self-acceptance and tolerance, but she doesn’t just talk the talk, she also puts her money where her mouth is. Gaga formed the Born This Way Foundation back in 2011, which works to create a more accepting society where individuals feel comfortable expressing themselves, and to create safe and accepting communities. 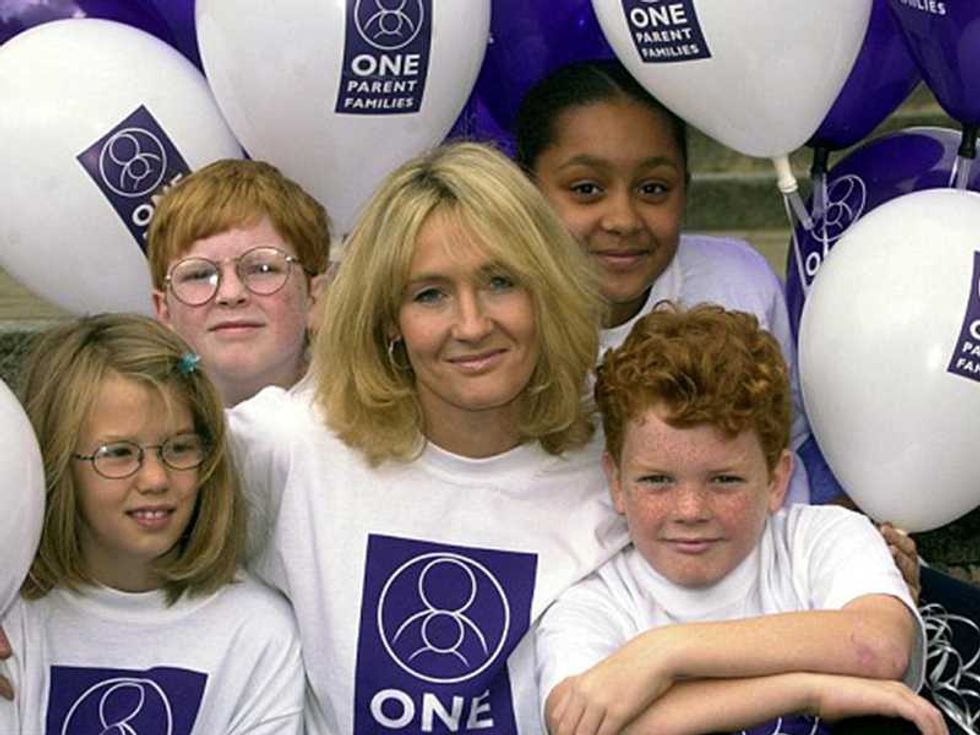 Previous Next
J.K. Rowling—The author became a billionaire following the run-away success of the Harry Potter books, but true to her strongly held left wing beliefs and ideals, the single mother has donated millions and millions of her money to those less fortunate. Rowling’s favorite charitable causes include One Parent Families, Children with AIDS, Multiple Sclerosis Society and Women’s Fund for Scotland. 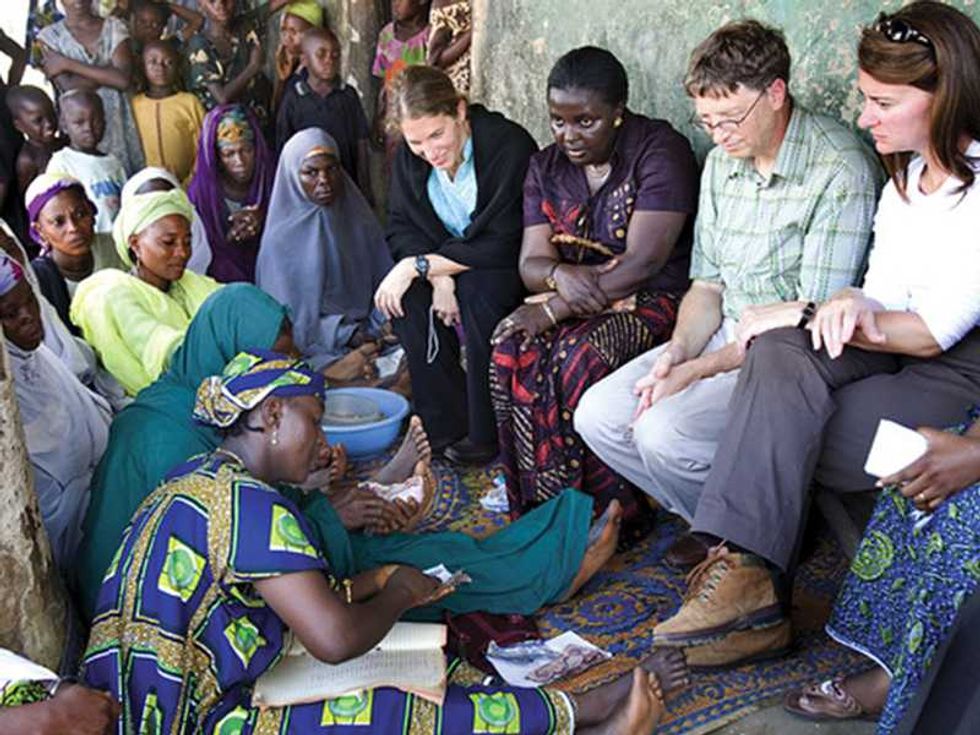 Previous Next
Bill Gates—The Microsoft co-founder is reported to be the richest man in the world with an estimated worth of $80 billion. Gates launched the Bill & Melinda Gates Foundation, along with his wife, back in 2000—it is believed to be the world’s wealthiest charitable foundation, with assets in excess of $34.6 billion, it’s also the most transparent and accountable, allowing benefactors to access information showing exactly how all the funds are being spent. The Gates have vowed to donate 95 percent of their wealth to charity. 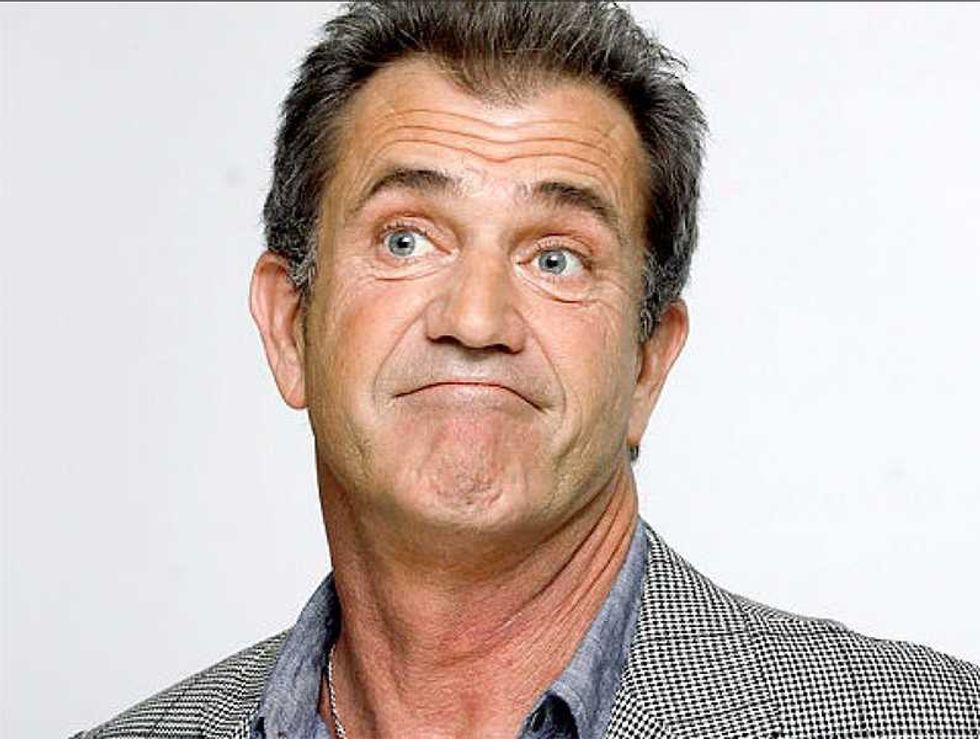 Previous Next
Mel Gibson—The Australian-born actor gives big through the A.P. Reilly Foundation, which he launched to support The Holy Family Church. In 2013 alone, Gibson was reported to have donated $6.8 million to the organization. 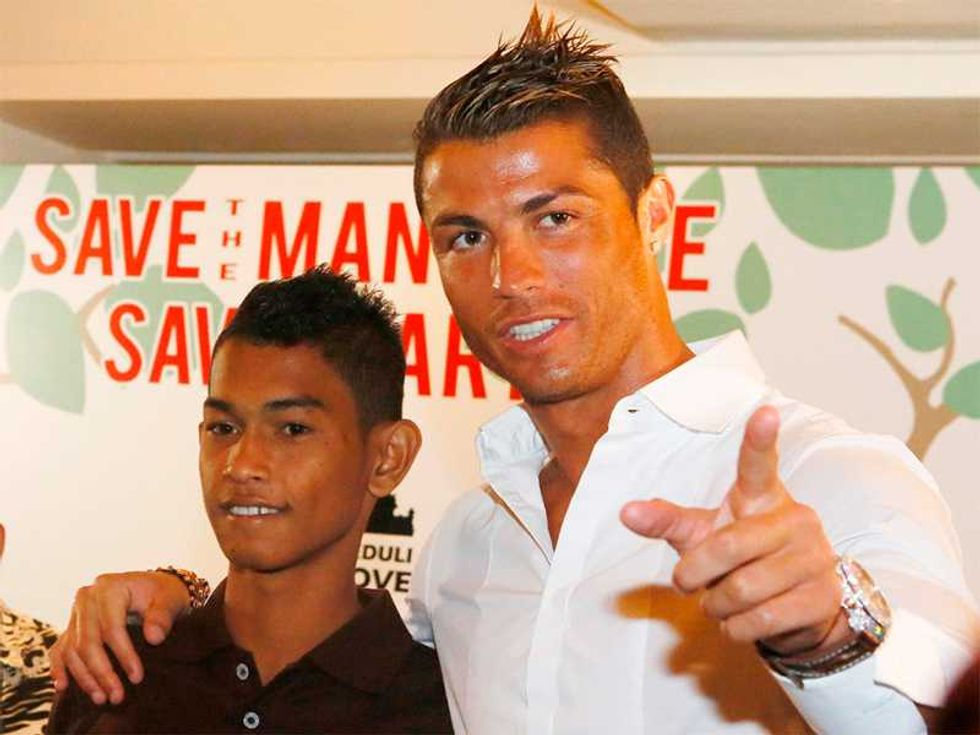 Previous Next
Cristiano Ronaldo—Arguably one of the best soccer players in the world, Ronaldo is not only a star on the pitch, but off as well—donating a sizable chunk of his multi millions to causes close to his heart. The 30-year-old is a vocal supporter of Save the Children and UNICEF—and once auctioned off his football boots and shirt to help raise $83,000 to pay for a life saving operation for a 10-month-old little boy…..(he ended up paying for the operation himself and donated the funds raised to charity) 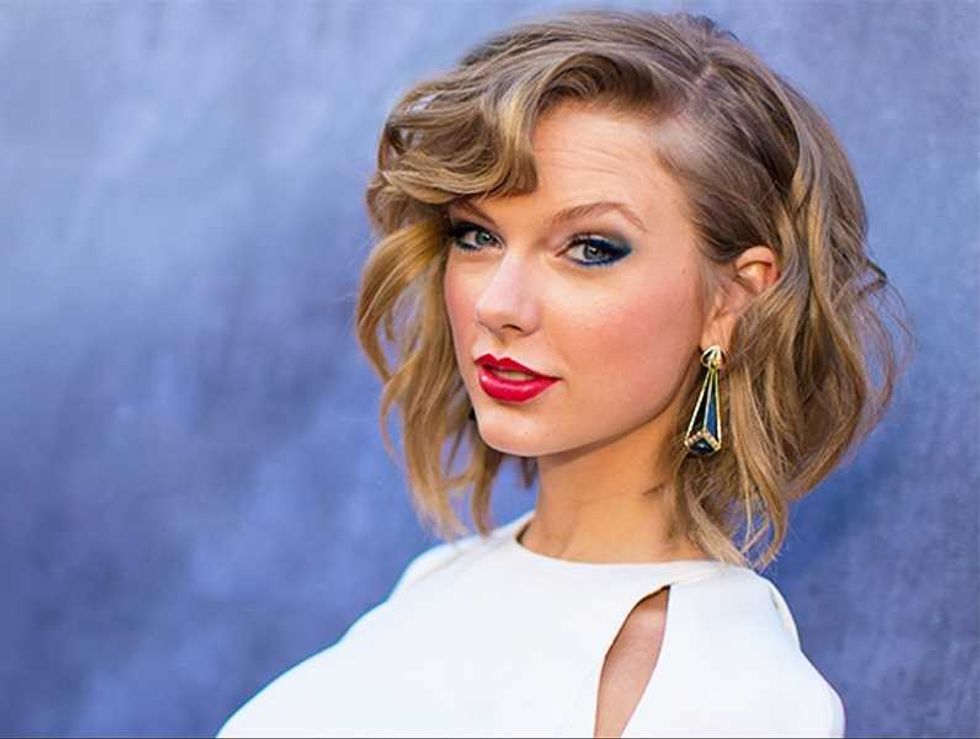 Previous Next
Taylor Swift—The 25-year-old often tops the lists when it comes to most charitable celebrities, donating both her money and time to causes she believes in. For her birthday, she donated $100,000 to the Nashville Symphony, and frequently gives to organizations and foundations that support upcoming artists, or musicians in need. 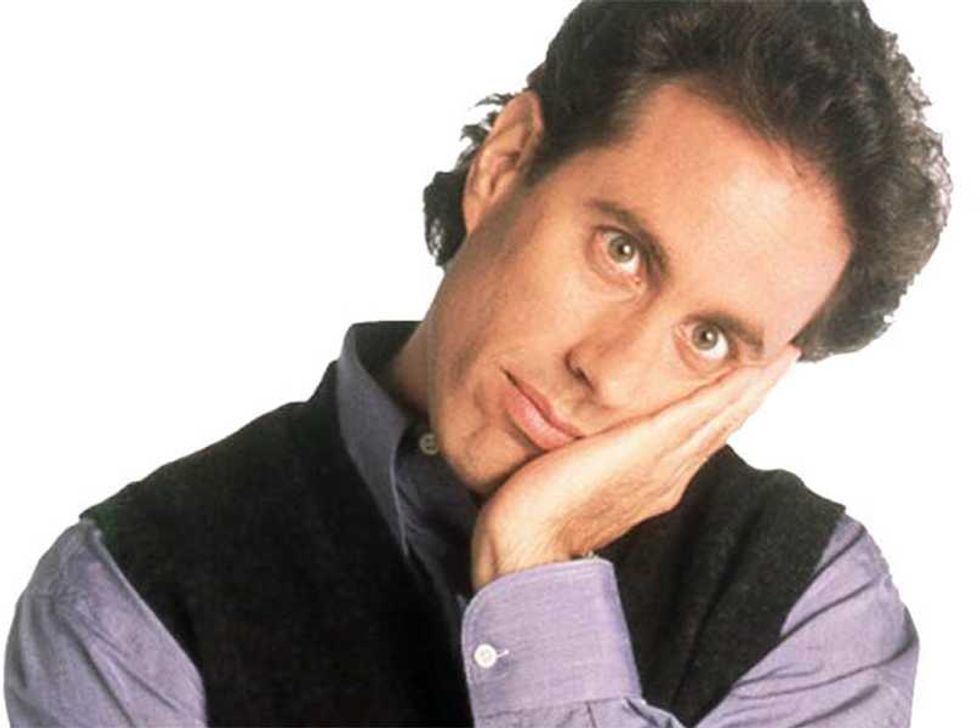 Previous Next
Jerry Seinfeld—The comedian funnels a portion of his estimated $820 million fortune back into the community via his Seinfeld Family Foundation, which supports the arts, education, children’s services, health associations, and Jewish organizations. 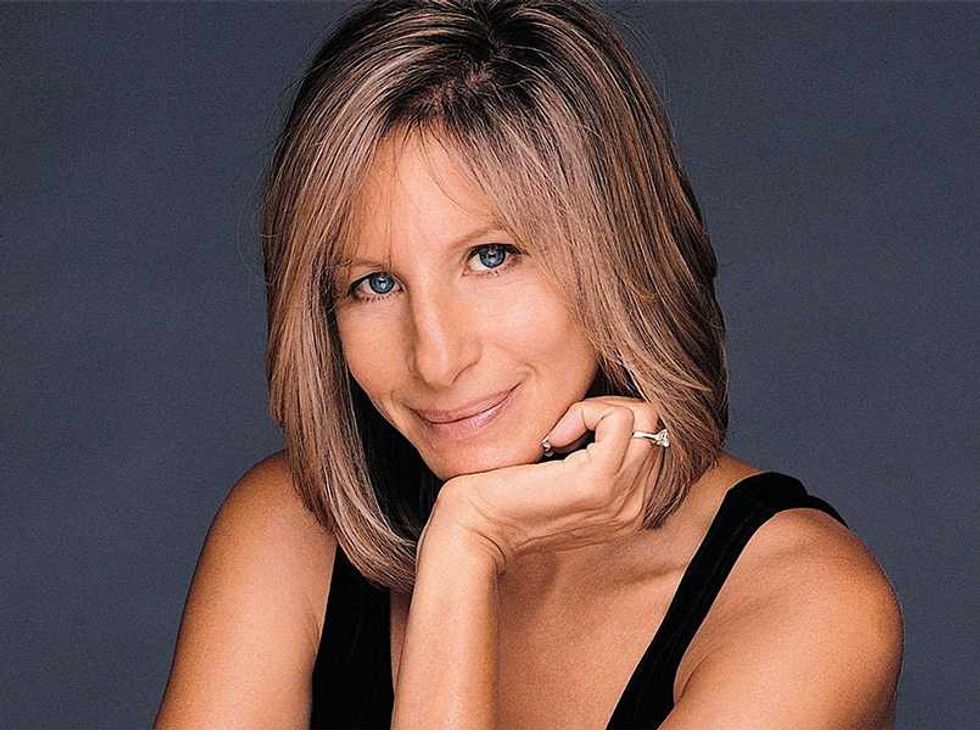