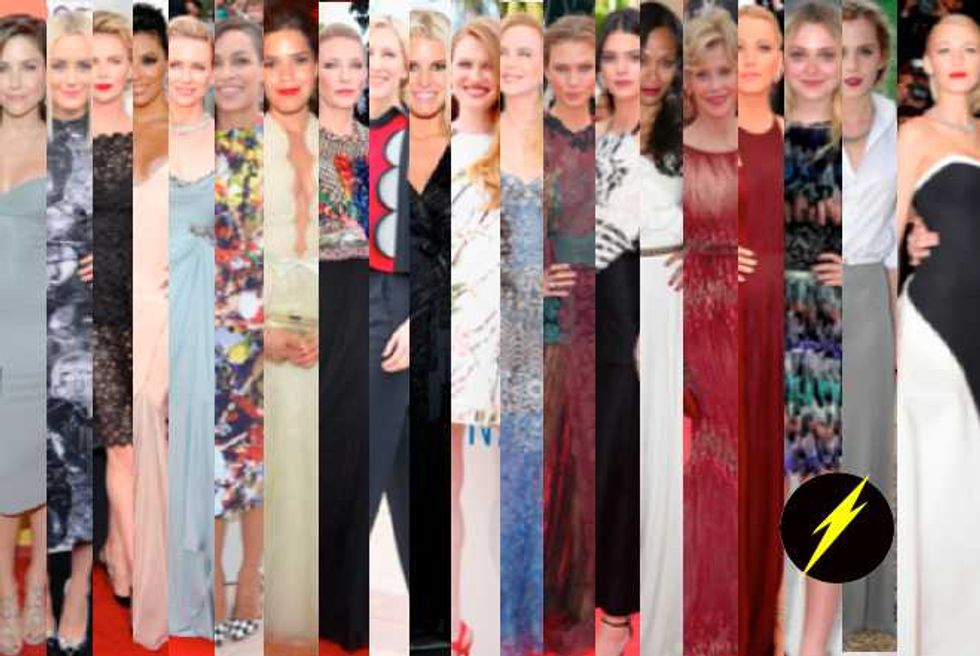 From the swanky red carpet of Cannes Film Festival to the hottest Hollywood events, celebrities like Blake Lively, Cate Blanchett, Jessica Simpson and Emma Watson were dressed to rock and shock this week – in the best, worst and most ridiculous designer duds. 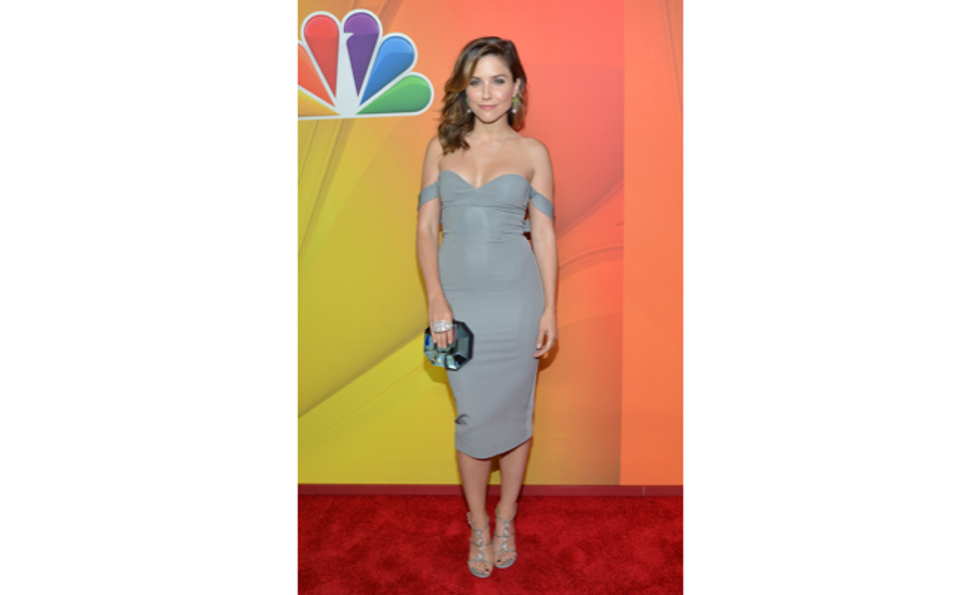 Previous Next
Best: Sophia Bush’s ex husband Chad Douchebag Michael Murray reportedly cheated on her with Paris Hilton. What an idiot. The stunning brunette showed some shoulder in a Cushnie et Ochs dress at the NBC Upfront. 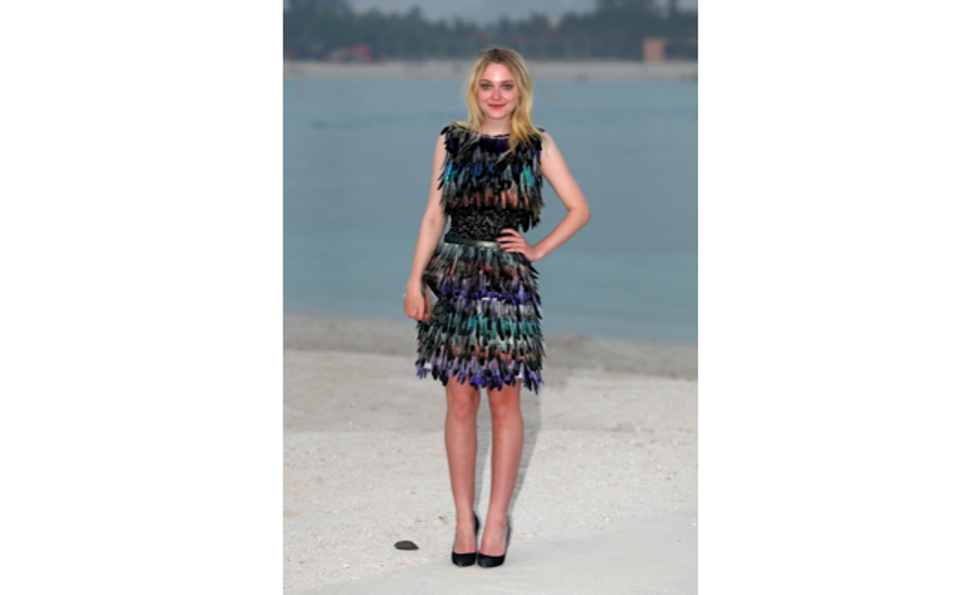 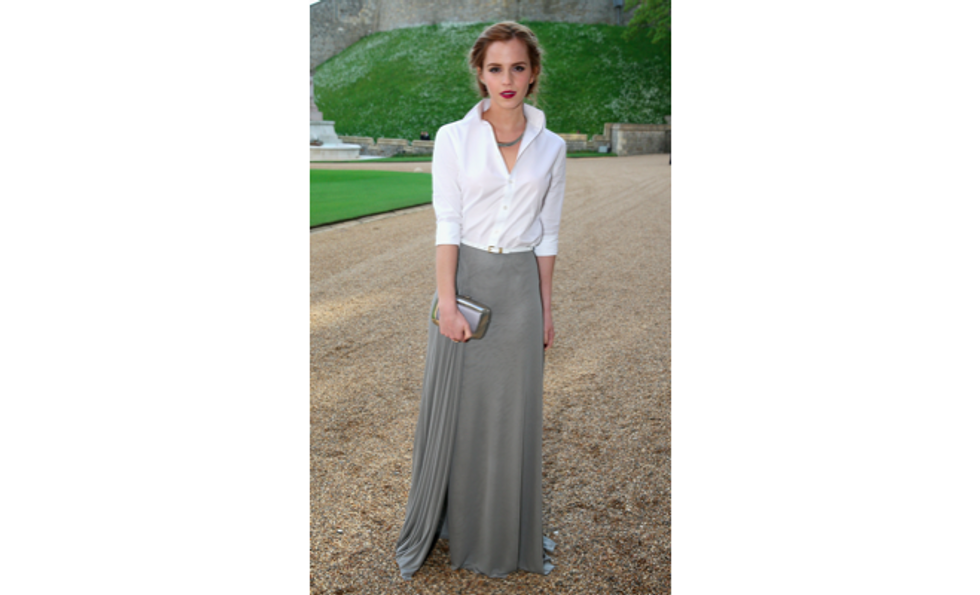 Previous Next
Best: Emma Watson looked seriously chic at an event at Windsor Castle in this Ralph Lauren ensemble. 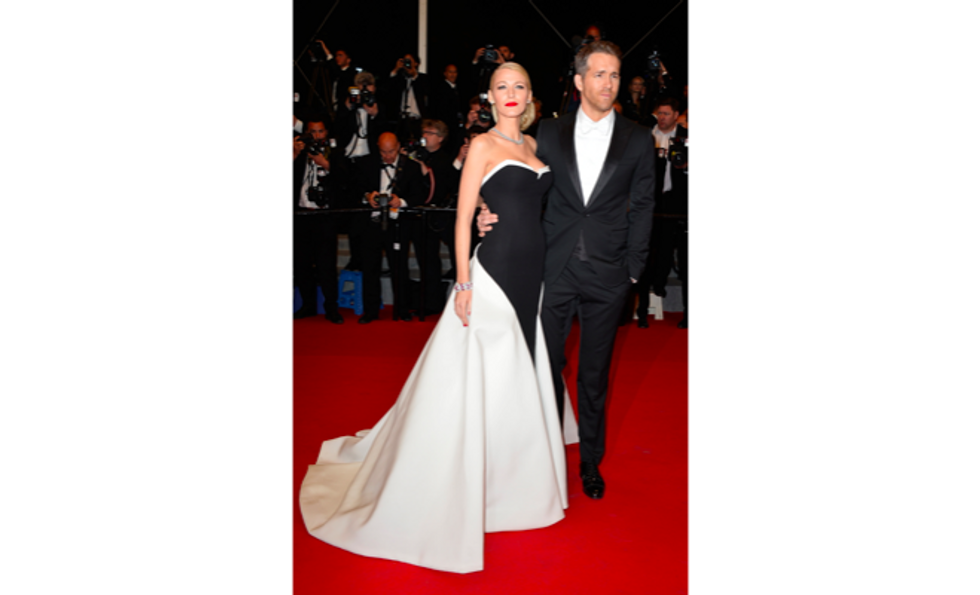 Previous Next
Best: Blake Lively, who is clearly the style maven of the Cannes Festival, dropped jaws in her black and white Gucci Premiere gown at the Captives premiere. Her arm candy, hubby Ryan Reynolds, made her look even better 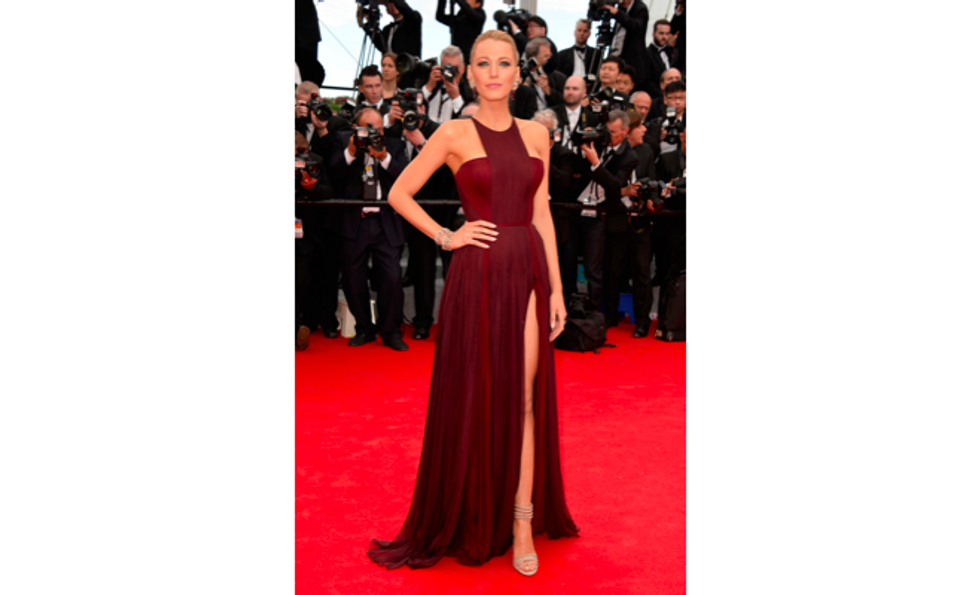 Previous Next
Best: Here she is at the Grace of Monaco premiere in a another stunning Gucci gown. 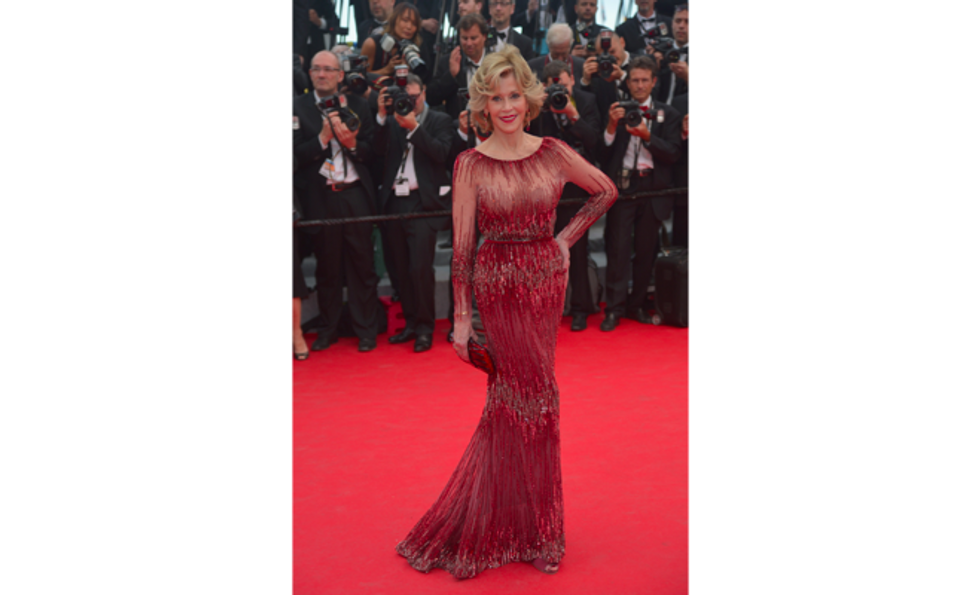 Previous Next
Best: I’m pretty sure Jane Fonda has gone under the knife, but who cares. She looks fabulous. Here she is at Cannes wearing an Elie Saab gown that Angelina Jolie already wore in another color, and I swear she looks better than Angie. 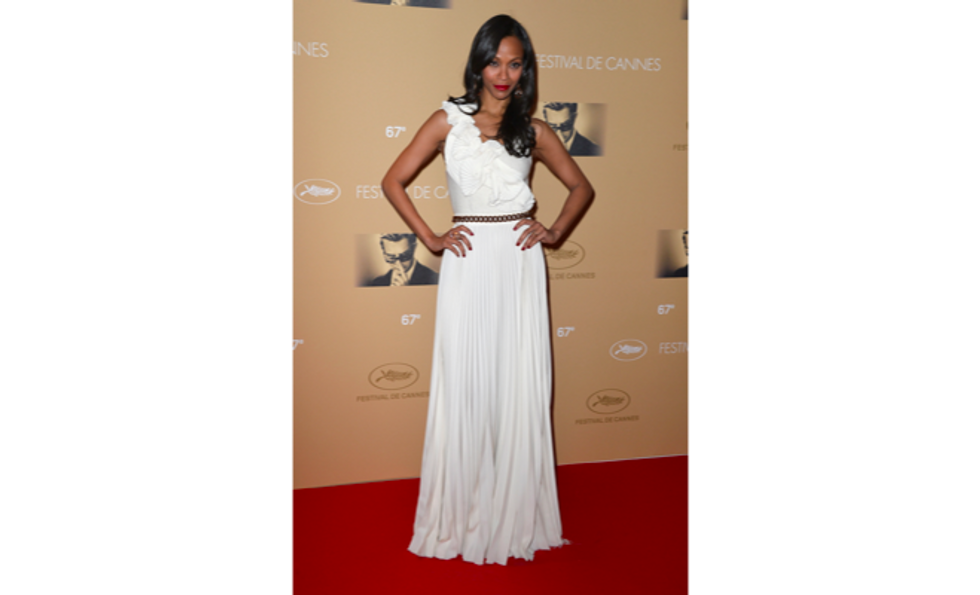 Previous Next
Best: Zoe Saldana opted for a white pleated Victoria Beckham gown at the Grace of Monaco event, which I really liked. 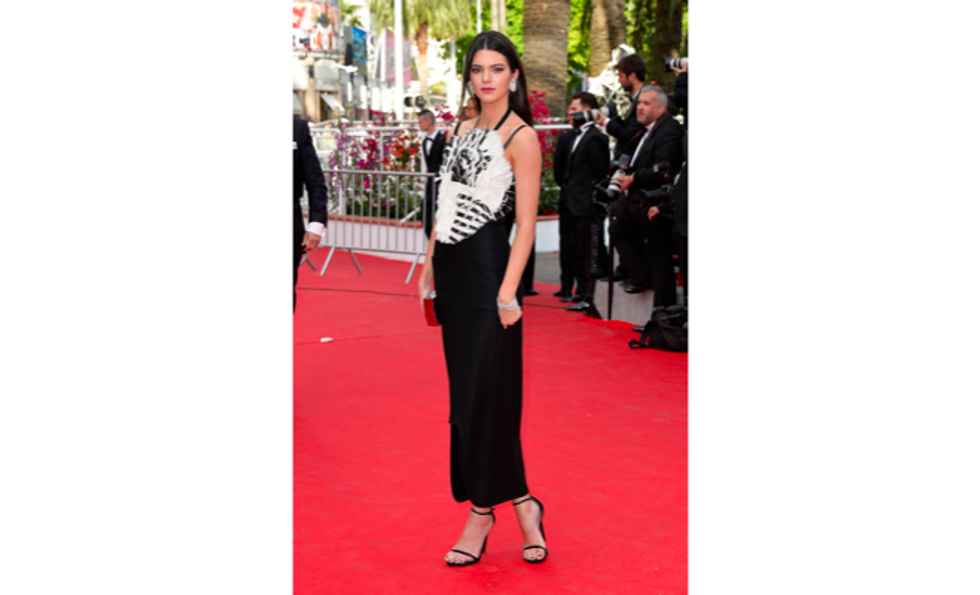 Previous Next
Most Ridiculous: What is Kendall Jenner doing at Cannes? And why is Chanel dressing her? Has Karl Lagerfeld lost his mind too? Well, it’s quite obvious Kendall was given one of the gowns that like every celebrity rejected, because this black and white thing is tres hideous. 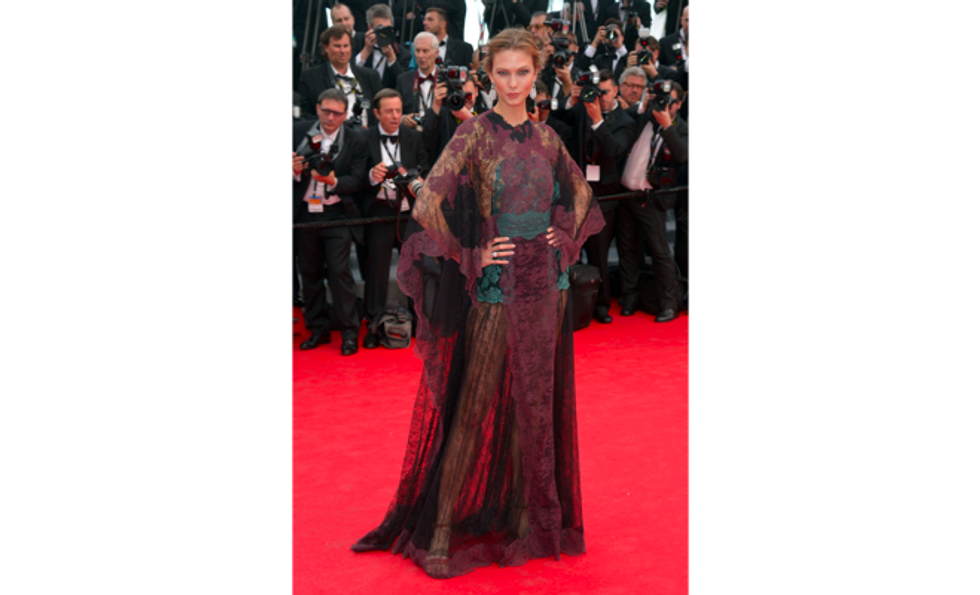 Previous Next
Most Ridiculous: Karlie Kloss definitely showed off her body in an ugly lace eggplant and teal hued gown at the Grace of Monaco premiere. 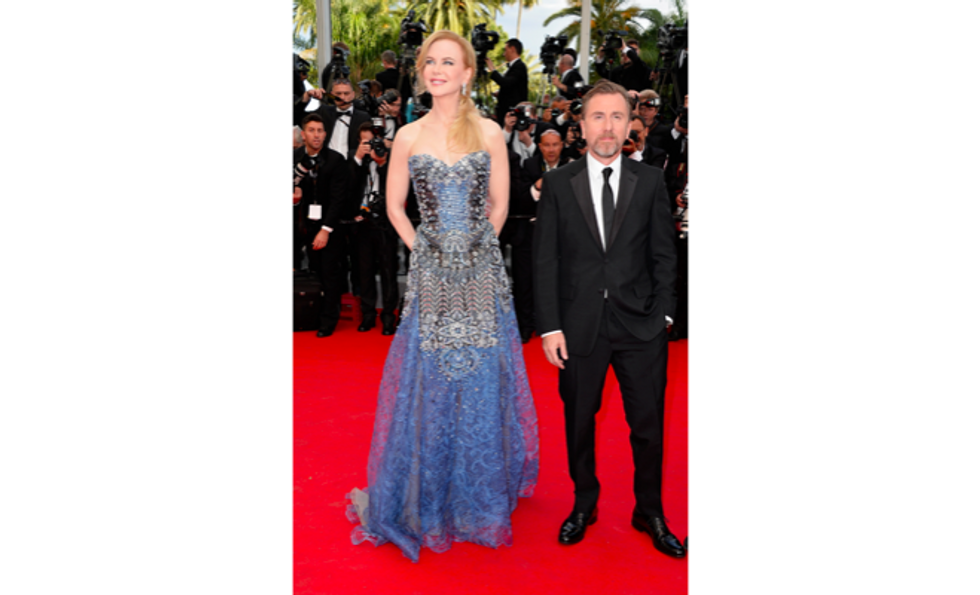 Previous Next
Worst: Okay, so after pointing out that Tim Roth looks SO short next Nicole Kidman and that despite the fact she is smiling and looking up and her forehead isn’t moving or wrinkling at all, let’s move on to her Armani Prive dress. I dunno, it’s just, how should I say it, gaudy. And the way she is wearing her hair in that side ponytail and sticking her hands in the pockets…it just doesn’t work for me. 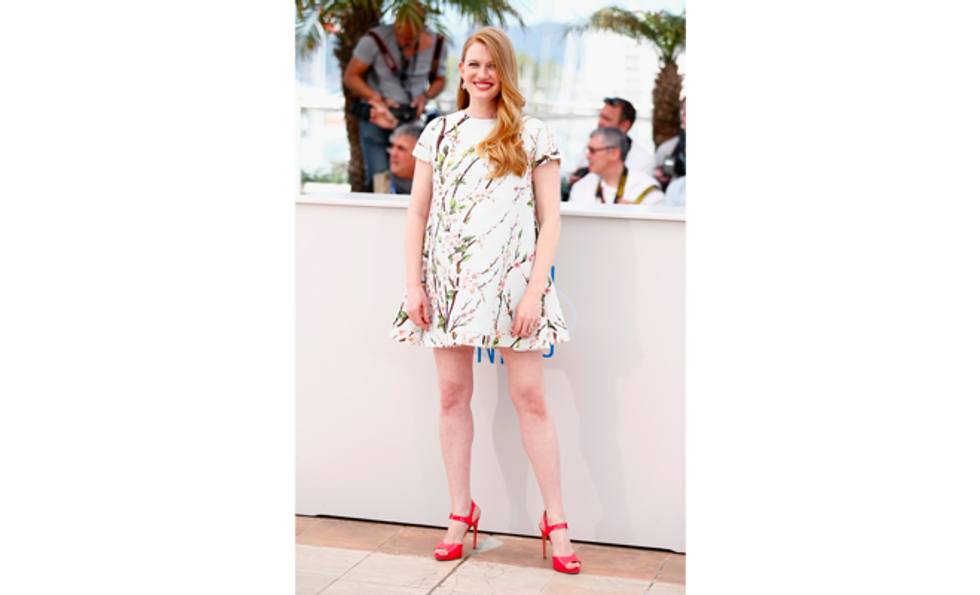 Previous Next
Best: Mireille Enos flaunted her baby bump at the Cannes Film Festival. Love it. 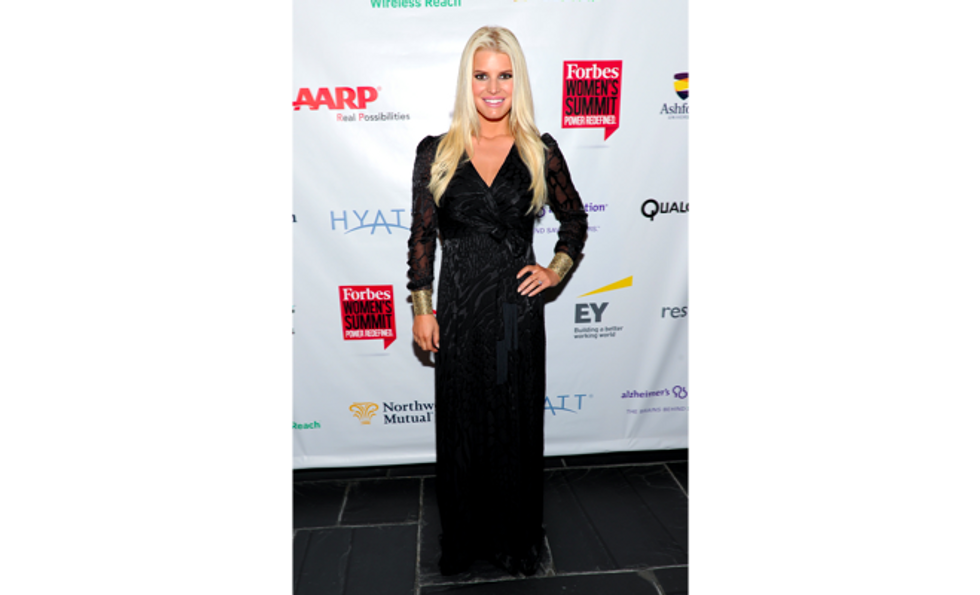 Previous Next
Best: Jessica Simpson flaunted her fab figure in a gown from her collection at the Forbes Women’s Summit. 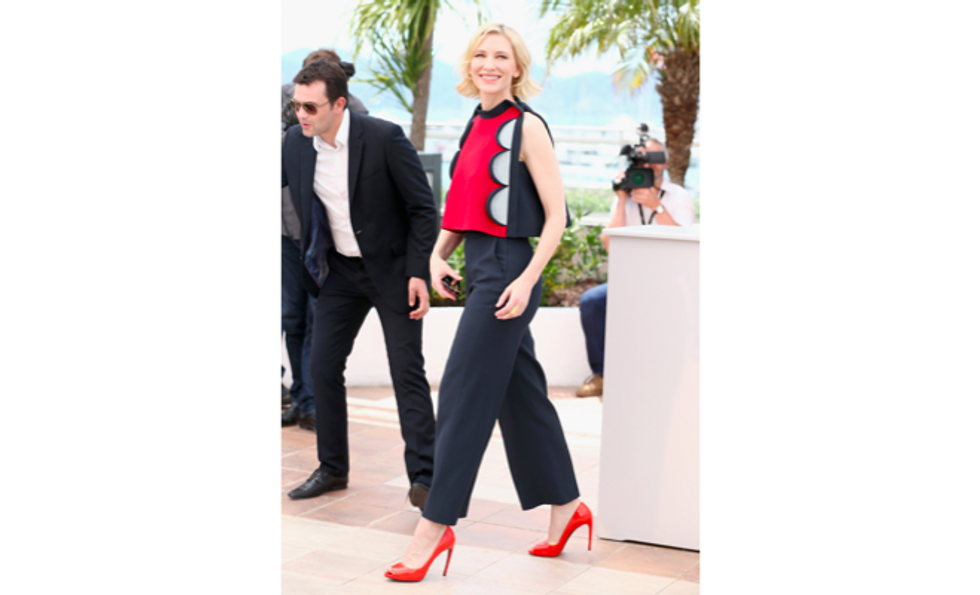 Previous Next
Worst: Oh, Cate Blanchett, WTF is this? Some creative prelude to the 4th of July? This pantsuit and space vest thing is what she wore to the How to Train Your Dragon 2 photocall. 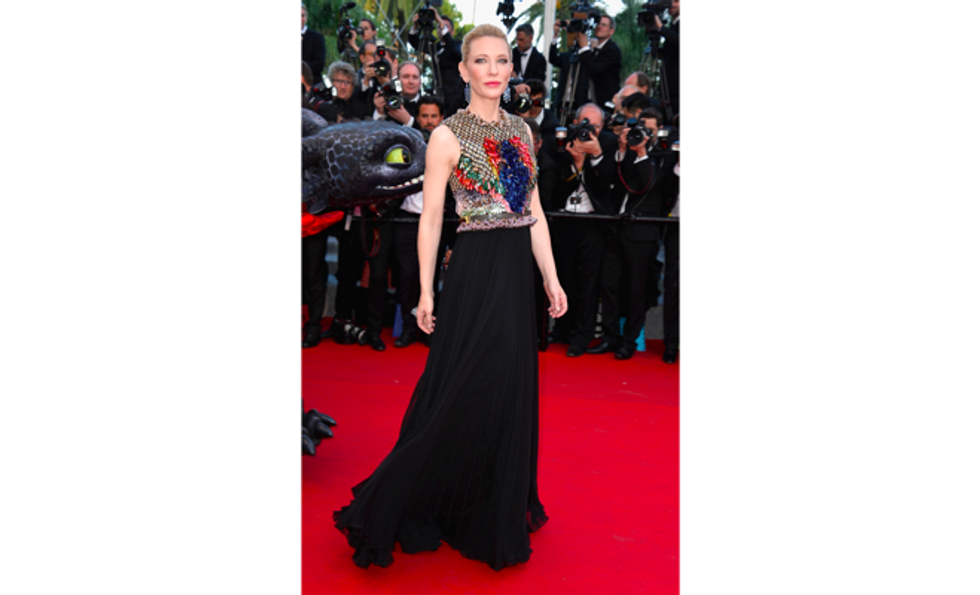 Previous Next
Best: But at least she got creatively clad for the premiere in a gorgeously embellished Givenchy gown. 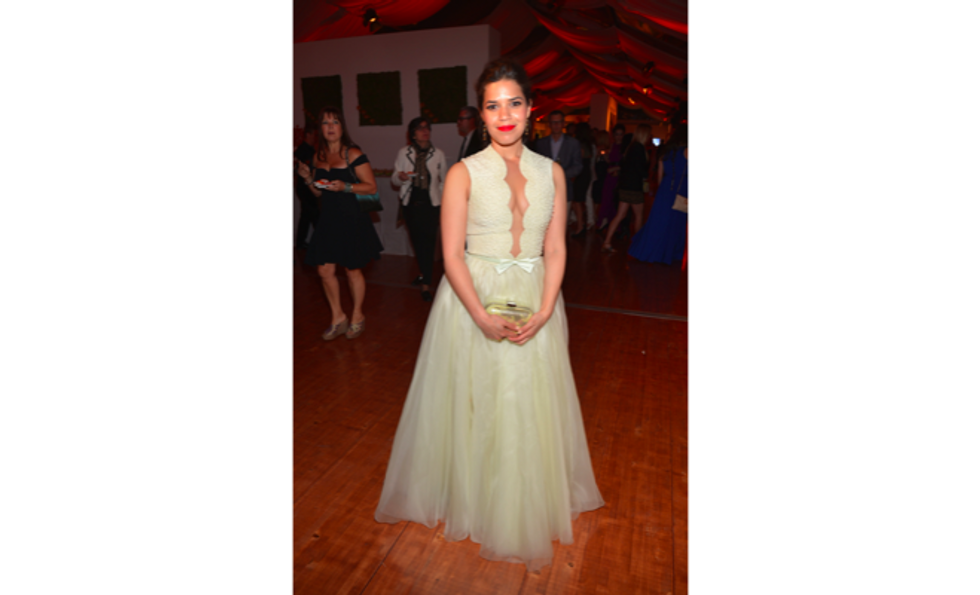 Previous Next
Best: America Ferrera took glam to the max in her Georges Hobeika gown at the How to Train Your Dragon 2 premiere. 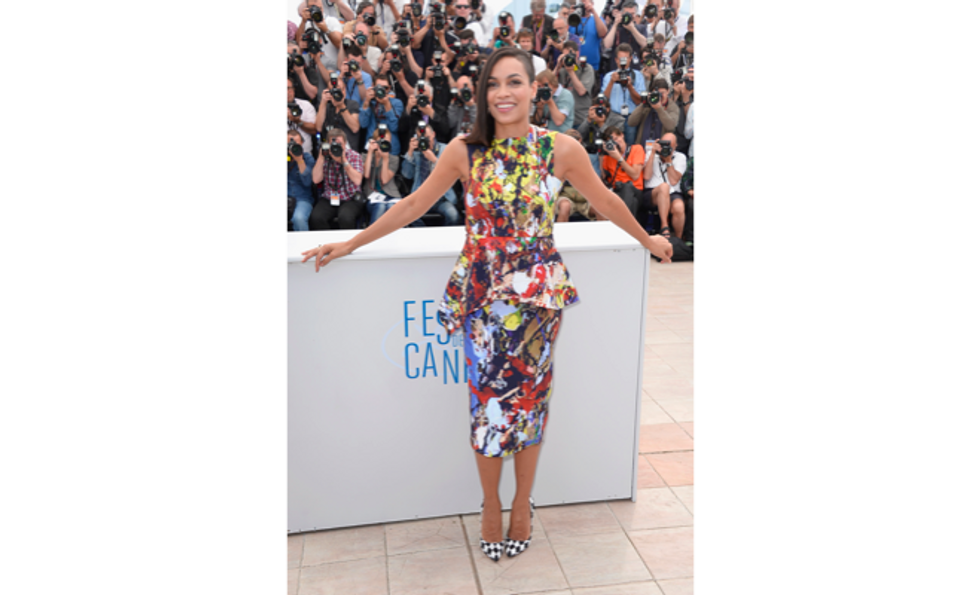 Previous Next
Worst: I’ve always had a hate/indifferent relationship with Rosario Dawson’s style. This falls under the “hate” category. I mean, who the hell would pair checkered shoes with a paint splattered peplum dress? 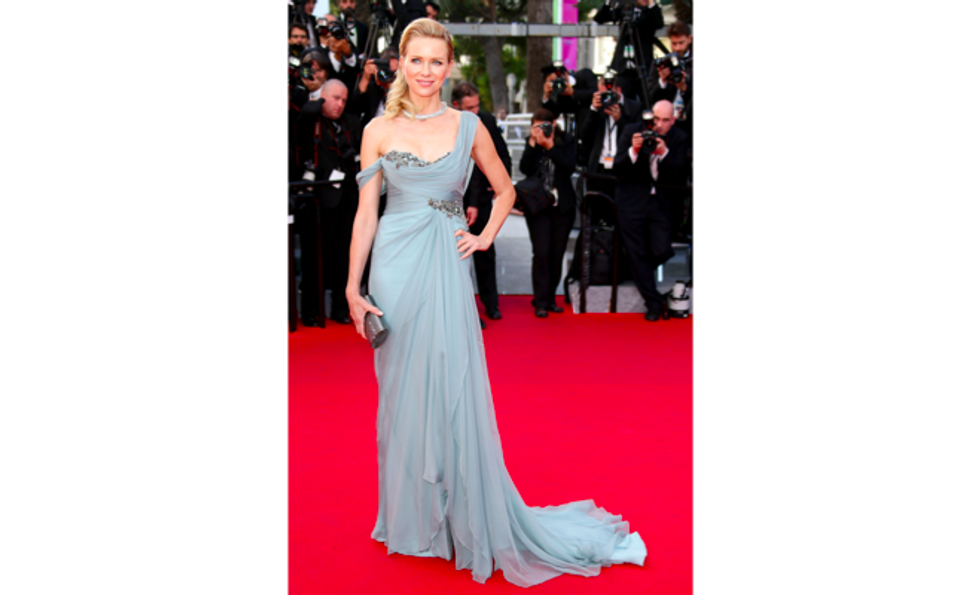 Previous Next
Best: Naomi Watts showed some shoulder in a Marchesa gown at the premiere of How to Train Your Dragon 2 at Cannes. 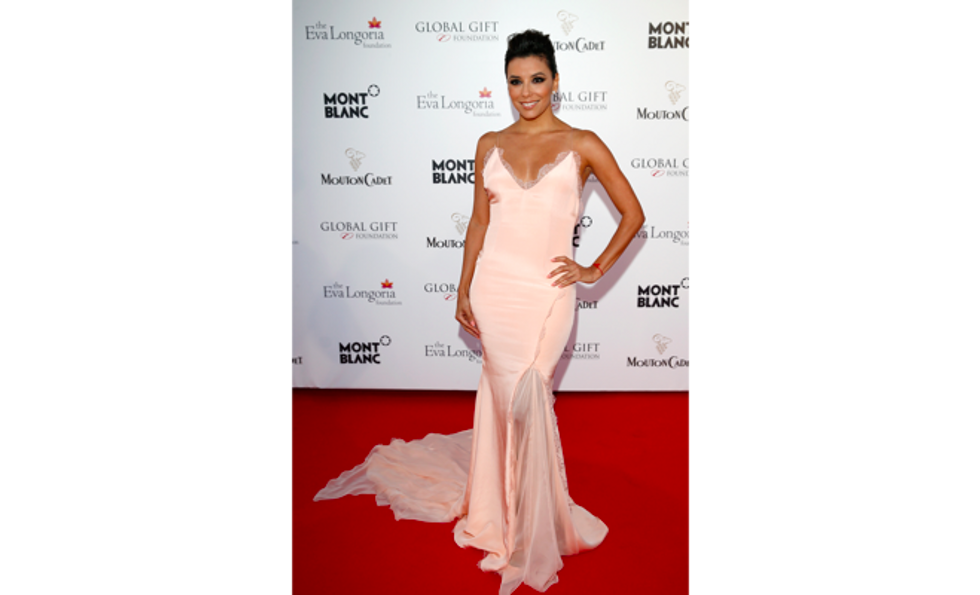 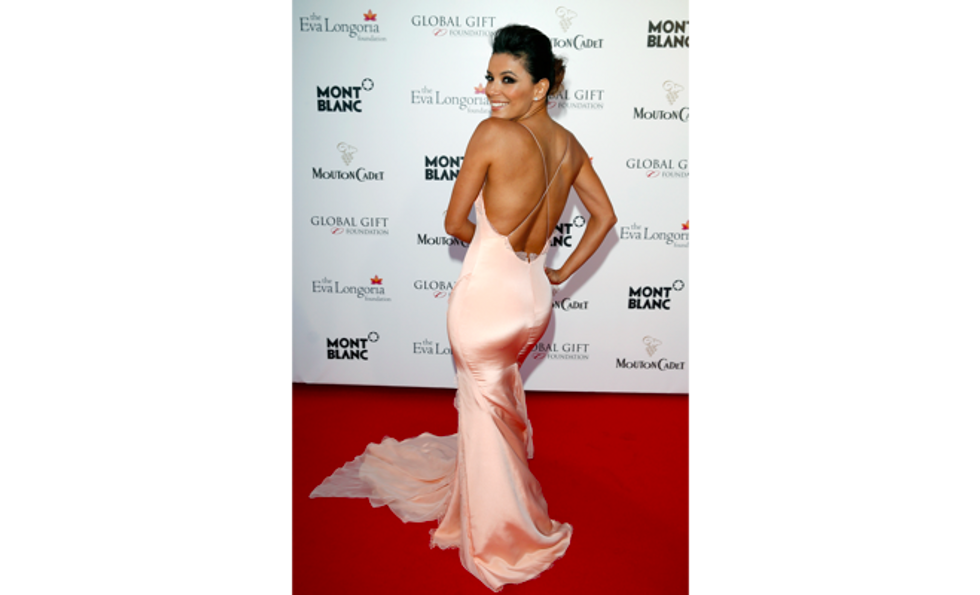 Previous Next
You must check out her bombshell backside in the snug number. 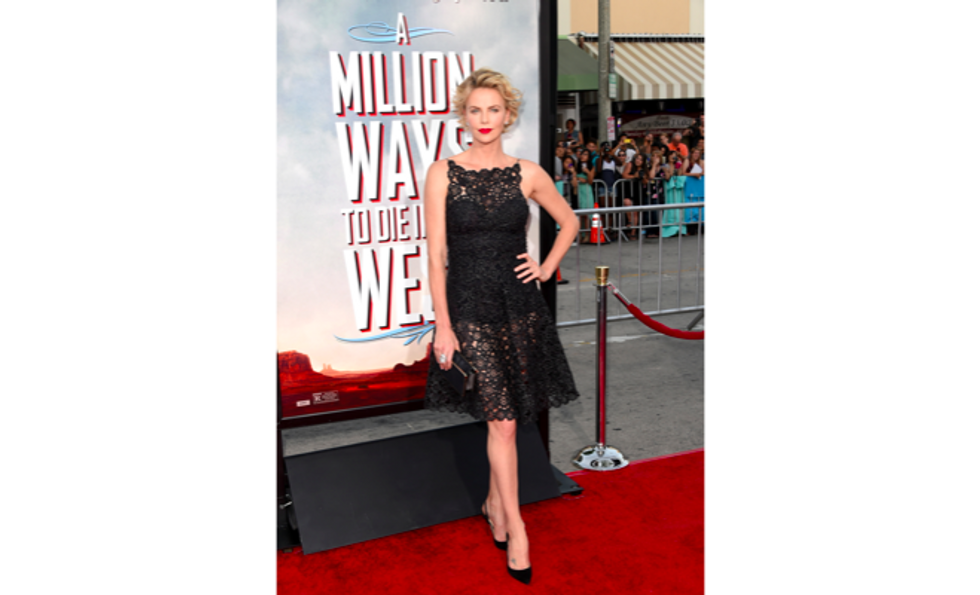 Previous Next
Best: Charlize Theron looked divine in Dior at the premiere of A Million Ways To Die In The West. 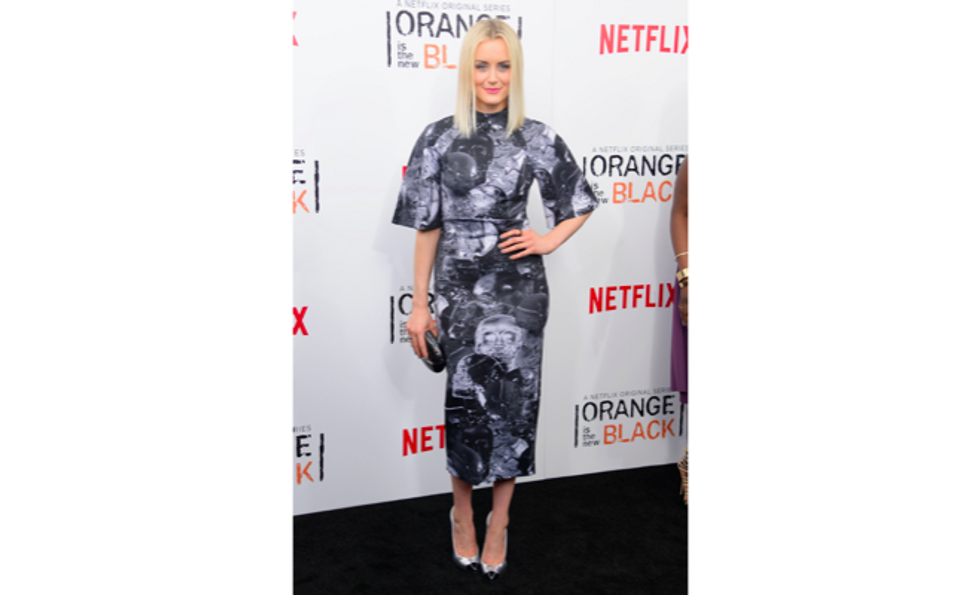 Previous Next
Most Ridiculous: Orange may be the new black but this skull print dress is not the new anything. Period. Taylor Schilling looked frightening at the season two premiere of her show in this Monique Lhuillier thing.
affiliate