When Is a Boy Band Not a Boy Band? When You Ask Them If They Are 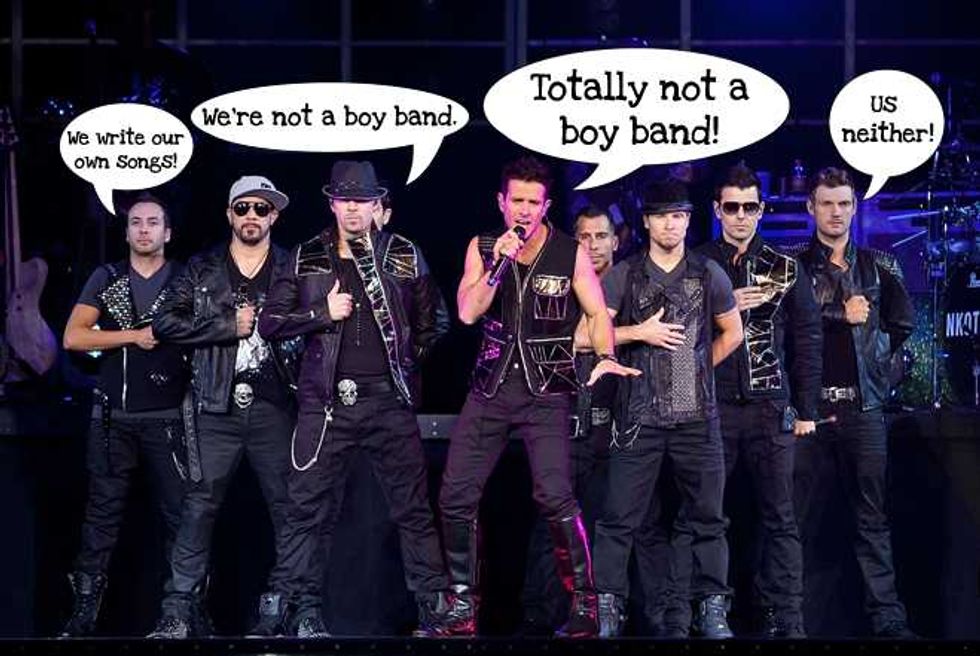 To bastardize Supreme Court Justice Potter Stewart's famous remarks about pornography, we cannot define boy bands, we can only know them when we see them. But this lack of a concrete definition has led to one of pop's most bizarre rituals, of boy bands embarrassedly disavowing their true nature. The names and the excuses might change, but one thing stays the same—these boy bands want you to know that they are definitely not a boy band. (That's not what our Greatest Boy-Band Song of All Time tournament say, but whatevs.)

Why not? Well the reasons vary:

"The whole boy band thing is a completely different vibe from our style, normally we'd be playing our instruments on stage but for [X Factor] we weren't allowed to. We wanted to explain that to everyone, we're not a boy band." —Emblem3

"We're not a boy band. We have one lead singer and we all play our instruments." —Royal Tailor

"Although I could be wrong, but I'm pretty sure we're not a boy band." —Wellington

"People think we're a boy band but we don't always dance. We're not a boy band that plays instruments, but a band that can dance." —Natural

"For people to call us a boy band is offensive. It's degrading. [...] We are boys and we are in a band, but we are not a boy band. We don't dance, and we write our own songs." —Busted

"We are a pop band—we're a band that plays pop music and that's what we like to do. These are the songs that we write, and the type of songs we like playing. We're not like a typical boy band." —McFly

"I would hope we’re not a boy band any longer. I think we’re a vocal group. Man band just doesn’t feel right either. Vocal group sounds much better." —98 Degrees

"Call us whatever you want, but we’re nothing like [One Direction.] They’re a lot younger than us for a start and probably better looking, cooler guys! Seriously, they’re a proper, traditional boyband and we're not." —Lawson

BOY BANDS ONLY HAVE FEMALE FANS:

"I want people to listen to [our album] and say, ‘Wow, is that One Direction?’ It’s not too cheesy — I think it’s the kind of album that guys will like as well as girls. I like to surprise people. We’re not a typical boy band." —One Direction

"We would just walk down the street and people would say, "Hey! It's the Backstreet Boys," and they thought they were all funny. We hear that every day, and when we do we cringe, like, 'No, we're not a boy band!' Obviously, now we accept that, you know, we are a boy band, and we can't deny that. We're different though. [...] It's about our spirituality and our faith, you know? Plus, we all play instruments, and sometimes on stage we'll all break out into an acoustic set." —PlusOne

BOY BANDS ARE NOT ACTORS IN A BASIC-CABLE SERIES:

"BOY BANDS" IS A RACIST TERM:

"As long as you like my music, buy the record, come to the shows, fact of the matter is, if you see us, you'll know we're not a boy band. It's a racist term. Is Boyz II Men a boy band? No. Is Jodeci a boy band? No. But are the Backstreet Boys and LFO boy bands? Yes. Because there are three to five white guys singing and not playing instruments." —LFO

"[One Direction] are worth millions. We're not." —The Wanted

"We're not fake. We're not a wannabe boy band. And we know if you don't up your game, someone will take your place." —Jedward

"We're five boys, five guys, so we're a boy band. but we are not a typical boy band." —The Boyz

Vote for the Greatest Boy-Band Song of All Time!

50 Shades of One Direction: The Steamiest Bits of 1D Fan Fiction on the Net