When Life Gave One Woman Thrush, She Made Sourdough With The Yeast—And I'm Seriously Conflicted 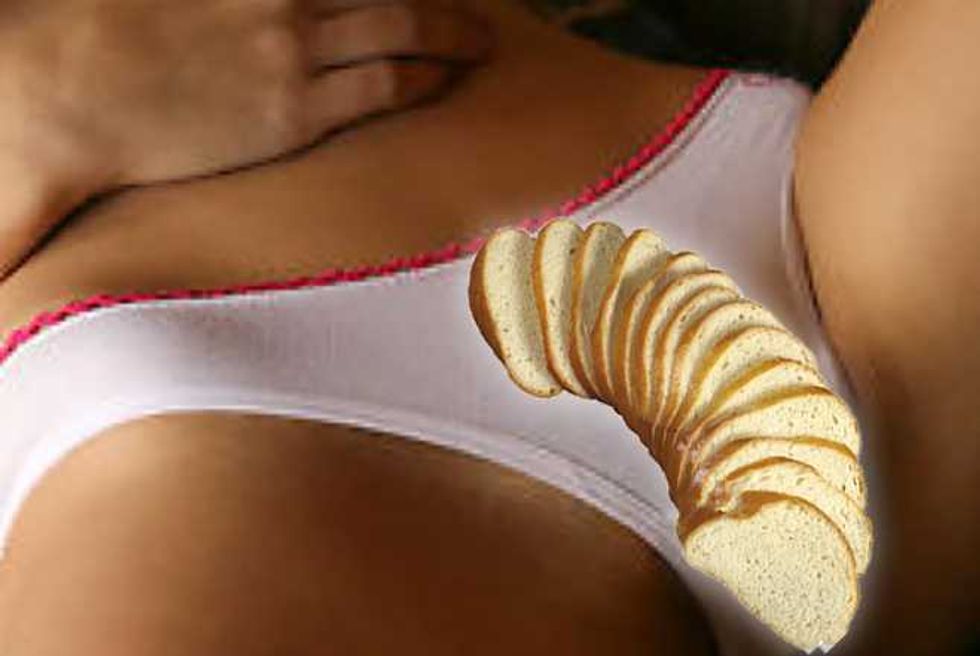 Zoe Stavri, definitely isn't your run-of-the-mill “half glass full" kind of person—in fact, her blog is called Another Angry Woman for a reason—but, when life gave this angry woman a vaginal yeast infection, she refused to just lie down and cry, instead, she turned the thrush associated pain into gain, and made sweet, sweet, sourdough bread.

With the yeast from her vagina—yep, seriously.

As anyone who has cooked sourdough knows, before you begin making the dough, you first need to make a “starter" containing an organism— a kind of live yeast (that is killed off during the baking process), capable of producing the gasses and alcohol needed to feed on the flour and sugar in the dough—to ensure your finished bread is soft and light under its crunchy crust.

The feminist blogger shared her unique sourdough bread starter recipe with her readers, along with a photo:

• Mix the ingredients together.

• Cover it back up

Stavri continues to blog and tweet about the cooking experiment during each step, sharing photos and anecdotes, along with a brief explanation of why she decided to embark on her vaginal yeast bread baking journey:

Not surprisingly, given the times we live in, she was quickly deluged with a shit ton of negative comments and tweets and general, good old fashioned misogynistic hate mail—the level of which shocked Stavri:

So, it seems to have generated rather a lot of disgust. Far more than I expected, to be perfectly honest: I'd expected perhaps the odd “eww" and maybe even an “I wouldn't eat that that", but not this, the level of outright horror, as though I'd dismembered a litter of puppies and was posting selfies with a selfie-stick while doing it.

Some of the negative comments simply focus on the utter disgust felt at the thought of using the yeast from a vaginal infection in the making of food, and express concern at the possible associated health risks—a subject Stavri responds to in great detail, and insists is pretty much baseless, as the yeast is killed during the baking process.

Other comments though, as Stavri notes, clearly come from a whole different mental arena:

I suspect the vast majority of the utter horror about my sourdough isn't anything to do with ignorance on food hygiene, but more to do with a general mistrust and horror at vag. I say this because I suspect if I were making my own any-other-thing-except-sourdough-using-vaginal-yeast, people probably would have just left me to it.

She continues at a later point:

It probably doesn't matter that my sourdough may or may not contain any actual vaginal yeast. The very idea of it seems to horrify people more than enough. I suppose it's a similar socially-constructed disgust that leaves a whole bunch of people repulsed by the idea of licking a pussy. Even the mere idea of a tiny trace of pussy in a massive loaf of bread is sufficiently vile.

Stavri shares a few of the tweets with her readers:

Despite the inevitable haters hating, Stavri appears to be taking it all fully in her stride, and she urges her readers:

This is important, people: please do not reply to or harass the tweeters: yes, you might want to defend me, but if you want to defend me or help me out, contribute to my Patreon, don't pile on these people.

And, before you rush to judgement, might be worth considering what truly horrific animal parts, and chemicals, secretly lurk in the run-of-the-mill foods we consume each and everyday.

Rat hair—If you love chocolate, there's a distinct possibility you've eaten more than a few rat hairs in your life—the FDA allows for 1 rat hair per 100 grams of chocolate (oh, along with 60 insect fragments)

Pig and horse hooves, animal tissue—boiled down to produce gelatin, which is used in gello, chewy candy, marshmallows, cakes, ice cream, and pharmaceuticals.

Dead beetles—crushed to produce carmine, a bright red dye used in candy and cosmetics….oh, and your Starbucks frappucino (which is touted as being “vegan").

Fish bladders—dried and processed to produce Isinglass, the substance that gives beer its golden glow.

Maggots—pretty much guaranteed if you eat canned mushrooms, then you're also eating maggots too—FDA regulations allow up to 19 maggots and 74 mites to be included in a 3.5 ounce can.

Toilet cleaner—ingredient in sodium bisulfire, which is used to extend the shelf life, and bleach the color, of potato chips.

Mmmmmmmmm…. anyone hankering after some rat hairs and beaver glands right now?

Chill With The Free-Bleeding Bullshit—It's Actually All About MIND, Not Menses

At Last! Those Vagina Emojis We've All Been Waiting For Are Here!

Aussie Punk Band Cuntz Are Mad About Objections To Their Name