Why Did Gucci Mane Tattoo An Ice Cream Cone On His Face? 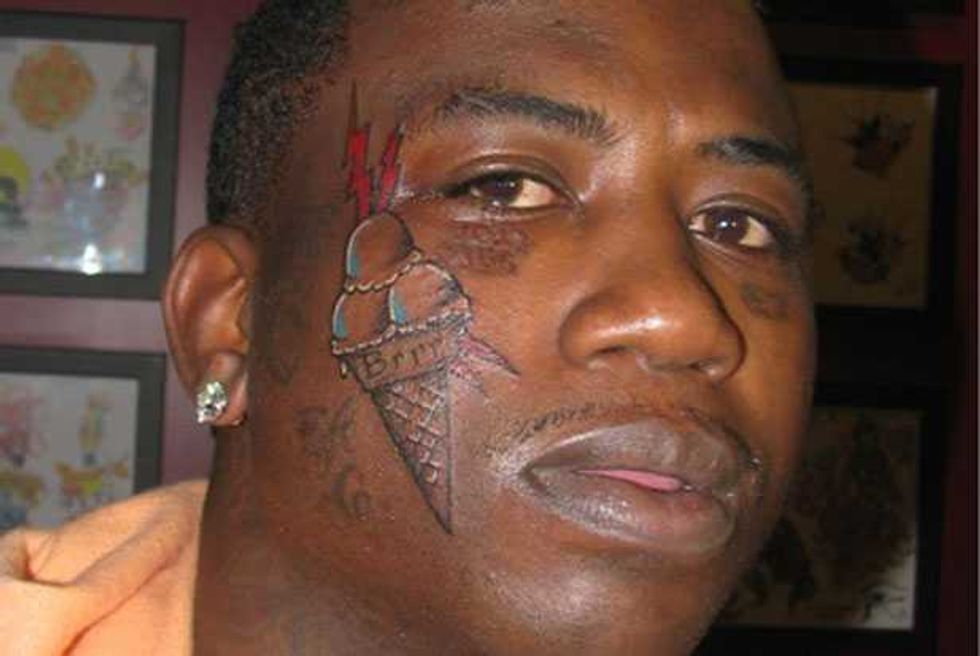 Beleaguered rapper Gucci Mane has finally emerged from Atlanta's Anchor Hospital after a judge ordered him to undergo psychiatric tests. Upon his release, he showed off how sane he is... by getting a enormous tattoo of an ice cream cone on his right cheek!

We're excited about this new development (hey, three scoops!). But what does it all mean? Well Gucci loves ice (of the sparkling, wearable variety), and he's been playing with chilly imagery for years. His debut single was called "Icy"; he wore a diamond-encrusted, ice-cream-shaped necklace to the MTV Video Music Awards this year; he released a mixtape series called Cold War; and he's constantly saying "Brrr" (as in "Brrr, it's cold," not "Aaron Brrr was kind of an overrated vice president"). And his lyrics are cold enough to make the Antarctic research team in The Thing go running for the cocoa—on "Gucci Time," he deemed himself "colder than a polar bear sleeping in the freezer."

So that explains the ice cream paint job and the adorable little "Brrr" caption. But why the lightning bolts? Maybe he's super excited about the launch of Popdust and he tried to jack our logo? Either way, there will be a great injustice if he doesn't get his own Ben & Jerry's flavor out of this (we recommend "Trappacino").

In short, Gucci Mane has hands down the best face tattoo in hip-hop right now. But then again, look at the competition:

Lil Wayne: "Fear God" on the eyelids, "I Am Music" on the temple, tears all over. Its a jumbled mosaic that lacks the stark simplicity of having a Cold Stone Creamery on your cheek.

The Game: Yes, if you're wondering, we can still tell that his Dodgers logo is covering up a butterfly.

Soulja Boy: "SODMG" over the eyebrow. It stands for Stacks On Deck Money Gang, but looks more like something your little sister would text you.

Sully Erna of Godsmack: Not really a rapper, but we wanted to note that his little star tattoo gives us the giggles.

From Your Site Articles
new balance