Why Does Madonna Hate Hydrangeas? 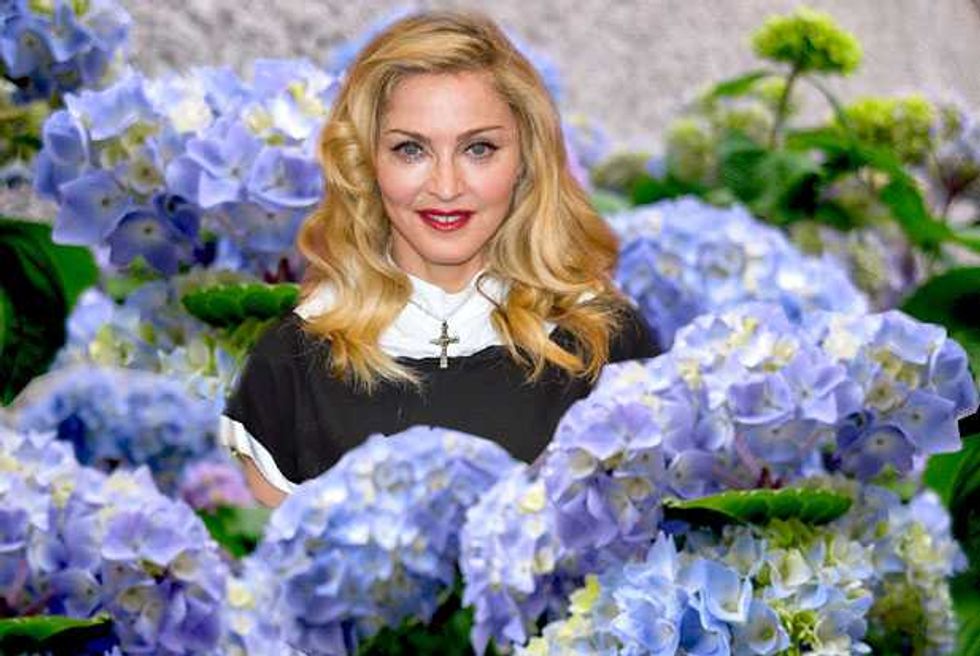 Madonna's utter disdain for hydrangeas made news over the weekend, largely because of her failure to realize such a public display of snobbery was caught on tape, as well as the ridiculousness behind her bemoaning such a gift. A quick recap: flowers were presented to Madge by a fan during a press conference for her new film W.E., to which she not-so-quietly proclaimed: "I absolutely loathe hydrangeas." Never meet your idols, kids. After the world exploded with viral riffs and humorous musings on Her Madgesty's comment, which has likely led many devout followers to rethink their own floral preferences, a spokesperson issued an official response to the non-controversy. "She's entitled to like any flower she wants and she didn't want to hurt the feeling of the hydrangeas of the world. No disrespect to the hydrangeas lovers of the world but she prefers different types of flowers," Madonna's rep said in a statement.

Maybe we don't get a lot of flowers around here, but the whole things sounds a little ungrateful to us. But maybe not. Hydrangeas might just be a really, really terrible breed of flowers that have secretly been responsible for some of the worst happenings in world history (or just music, specifically). We're not florists, which is why we threw this one to the professionals, hoping to discover if loathing is the typical reaction one might have in the presence of such (seemingly pretty) flowers.

"Everyone has their personal preferences when it comes to flowers, but I will say she is the only person I've ever heard of that hates hydrangeas," said Jeff Leatham, notable floral designer to the stars. While Leatham lists orchids, calla lilies and roses among his most popular client requests, hydrangeas have been an American garden staple since beings transported from England in the 1700s, later becoming a fixture in mainstream households thanks to the Tao of Martha Stewart. While their Northern European origin alone should satiate the notorious Anglophile's craving for all things born and bred across the pond, hydrangeas are frequently used in both Japanese herbs and teas, leading us to demand an ingredients list for wherever her fountain of youth creams and potions come from.

Madonna was once partial to filling videos like "La Isla Bonita," "Bedtime Stories" and "Love Profusion"—not to mention her children's book The English Roses—with floral references, including roses, sun flowers and lilies. To her credit, we never once saw a hydrangea in the bunch, so give her points for consistency. So where did this longstanding hatred come from? "Hydrangeas are very romantic, feminine and maybe a little demur," suggested Eddie Zaratsian of tick-tock Couture Flowers based in Los Angeles, Calif., who has worked with corporate clients like Chanel, as well as an undisclosed list of celebrities. "Madonna is known for her strength and confidence and so it's only natural she would gravitate towards a bolder flower." The elephant in the room: hydrangeas are working-class flowers, aren't they? Somehow partially responsible for current economic crisis? Make your pee smell bad? "I think a lot of people have strong opinions about flowers, [but] it's just that we pay close attention to what celebrities do and say," Zaratsian continued diplomatically. "Sure, it could be a small part of cultivating an image, also in the same way Madonna likes to wear certain designer clothing like Dolce & Gabbana. But it's important to know what you like and it's especially important for celebrities to create an image. I don't see it as a negative thing at all."

To Zaratsian, who believes every flower to be a "gift from God"—we'd make Carrion flowers the exception—it is the overall experience of receiving flowers that helps one formulate a memory, and thus create an opinion or preference to hold over time. "What [do] they take from that connotation of that flower? What is that memory of that flower for them?" he explained. Perhaps the larger question is: what did these innocent flowers ever do to you, Madonna? Because of her quick, vehement response at the Venice Film Festival, we'd say they stole all of her lunch money as a kid, and beat her up on the schoolyard, obviously.

Staunch opinions like these might seem ridiculous, yet are really no worse than anything said or done by the women featured on Bridezillas, or some of our own most private freak-outs in the frozen food aisle, conveniently hidden from reality cameras and mainstream media. Madonna is also not the first star to have a flower-related episode. Katy Perry famously—and in all caps—outlined her distinct distaste for carnations earlier this year, leading up to her California Dreams tour. Carnations, of course, have long been the black sheep of the floral family, so we could fully understand it if Madonna had decided to toss them from the hands of her fan altogether. "I'm never surprised when people don't care for baby's breath or carnations," Leatham confessed, hinting at the longstanding bias towards carnations due to their low cost and simplistic look. Yet, both designers insist hydrangeas do not share the same stereotype. "There is no connotation for a hydrangea," said Zaratsian. "Personally I don't know why Madonna hates hydrangeas, but you know she could hate something now and then love it later. It all depends on who does [the arrangement]." Congratulations, Madge. Despite your outburst, the floral world is still hopeful you'll change your mind. And somewhere, a sad bunch of droopy flowers is still yours, if you'll have them.