YOLO Turns One: Looking Back on Twelve Months of Only Living Once 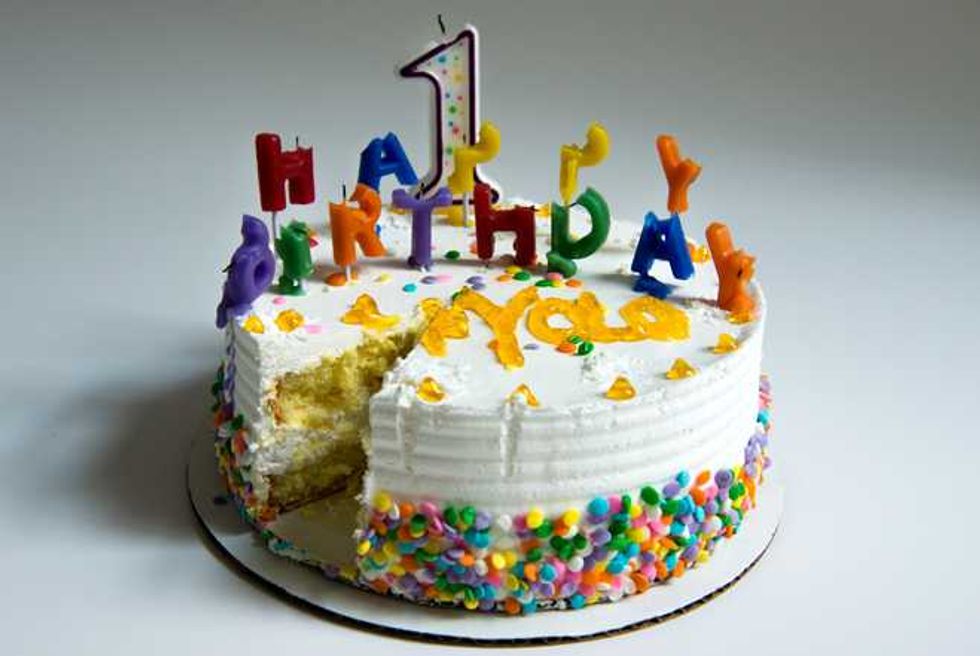 To think, it all started because of a mixtape. In late 2011, Drake and Rick Ross were contemplating recording a mixtape together and naming it YOLO, an acronym for You Only Live Once. To lay the groundwork for this release, Ross and Drake began dropping the phrase in their music—including, crucially, in "The Motto," Drake's smash bonus track off Take Care. As "The Motto" exploded, its fans began taking YOLO as their actual motto, and a phenomenon was born.

This November 29, the one-year anniversary of Drake dropping "The Motto" as a single, we look back on the first twelve months of YOLO. You Only Turn One Once!

The phrase "You only live once" has been around a lot longer than #YOLO, of course; it's a basic fact of life. The term's history as an inspirational message is thought to date back to the 18th century, when Goethe used it in his tragedy Clavigo: "Man lebt nur einmal in der Welt." (Literally "You only live once in the world.")

"Man lebt nur einmal" soon became the German YOLO, with Goethe's followers in the Romantic movement taking the same inspiration from the phrase as Drake's would 200 years later. In 1855, nearly a century after Goethe first coined the term, Austrian composer Johann Strauss II used it as the title of a waltz, thus becoming the first musician to record a YOLO anthem:

By the middle of the 20th century, the English translation of phrase, "You only live once," was familiar enough in the popular lexicon that the James Bond franchise felt comfortable putting their own spin on it:

It wasn't until 2004, though, that someone first thought of making "You only live once" into an acronym. That someone, surprisingly, was former Average Joe star Adam Mesh, who waded into the fashion industry with Yolo Clothing. At the time, though, it was not a given that people would understand that "YOLO" stood for "You only live once"; the line's apparel decided to meet consumers halfway:

A few weeks after the clothing line launched, some anonymous netizen uploaded the first definition of YOLO to UrbanDictionary.com, in what looks suspiciously like a sneaky cross-promotional effort.

THE BIRTH OF YOLO

The idea of YOLO percolated around the culture for the rest of the decade, popping up in a promo campaign for a Strokes single and inspiring the name of a life-coaching business, but never catching on and becoming a full-blown trend. Then, in 2011, the phrase got the messenger it deserved in Drake. The Canadian rapper was at the height of the Take Care frenzy when he tweeted "YOLO" on one fateful October night—throwing such an easily hashtagable four-word phrase out to his millions of followers was like pushing a kindergartener into a pool of piranhas.

His audience suitably prepared, Drake dropped "The Motto" on November 29. With the first instance of the refrain a minute into the track, "You only live once, that's the motto n---a: YOLO," the craze was officially birthed.

With an audience of social-media-friendly teens following Drake's every move, YOLO soon burned like wildfire throughout the web. It popped up on Facebook:

People got it on license plates:

The actor Zac Efron liked it so much he got it permanently tattooed onto his skin:

Soon adults got into the fun. This One Direction Dad put it on a T-Shirt:

California's Yolo County began using the phrase in its marketing:

One guy even named a yacht after it:

But for the most part, YOLO remain the province of young people, many of whom employed it as they did typical young-people things. Like getting tattoos:

Among people already disinclined to like those young-people-things, YOLO backlash was swift and merciless. It thrived on the social web of Reddit and Buzzfeed, where mocking strangers comes second only to remembering the '90s in terms of viral buzz. YOLO's adherents, being predominantly teenaged and female, were a juicy target, as this parody image demonstrates:

Even serious outlets got in on the YOLO mockery: The Washington Post, which once brought down a president, called it "the newest acronym you'll love to hate."

YOLO haters' concerns were confirmed (in their own minds, at least) the night of September 1, when aspiring rapper Inkyy died in a drunk-driving accident shortly after tweeting the phrase:

That Inkyy was a passenger in the car and not the driver didn't seem to matter; the story made the aggregation rounds as a cautionary tale against the dangers of YOLO.

Despite the plethora of haters, some parts of mainstream culture found they could use YOLO for their own purposes. Katie Couric, always the newscaster most comfortable on the youth beat, started a recurring series about viewers' hopes and dreams called "What's Your YOLO?"

The wider world of pop music, too, jumped aboard the YOLO trend, as the carpe-diem attitude perfectly matched the gleeful hedonism of the EDM wave dominating the charts.

But earlier this month, YOLO lost out on the ultimate honor, finishing narrowly behind .gif as the Oxford American Dictionary's word of the year for 2012. We're not ones to question the wisdom of this decision—though we will say that YOLO is much more "2012" than .gif, which was first coined in the '80s—but well, why couldn't it be both? After all, they fit so perfectly together:

HAPPY FIRST BIRTHDAY #YOLO! WE CAN'T WAIT TO WATCH YOU CONTINUE TO GROW!