WATCH: Billie Eilish Declares Your Opinion Of Her "Not My Responsibility" In Powerful New Short Film

Remembering Larry Kramer, Who Taught Us How to Turn Activism into Art

Cardi B Wants an "Extremely Holy" President (a.k.a. Bernie Sanders)

All hail Cardi B.

Cardi B has been making waves for her style, powerful energy, and headline-worthy interview in a recent issue of American Vogue.

While she did address her relationship with Offset and how she balances being a mom and a star, she also took some time to discuss politics.

Since 2016, Cardi B. has publicly endorsed Bernie Sanders, even appearing on camera in an endearing interview with the Democratic candidate, who is currently beating Trump in some polls. According to the rapper, she supports Sanders because he is a "humanitarian" who "has the perfect intentions" and "naturally cares about minorities. He actually cares about people getting Medicare because he knows they can't afford it," she said. "I don't feel like he's just saying these things 'cause he want the vote."

Medicare for All, she said, makes sense, especially in one of the wealthiest countries in the world. "It's like, why is this such a successful country and we don't have Medicare for everyone? It's like, how are people gonna work if they're sick? People gonna f*cking be paying forever. And we don't have freaking free schools? That discourages people to want to go to school if you gotta pay for it."

As a mother, she also sees Sanders as an investment in her child's future. "I give my daughter so much love, and I'm setting her up for a future," she said. "I want to tell her that a lot of the s*** that I have done in life—no matter what I did, knowing that I wanted to have kids made me go harder to secure a good future for my kids."

Classic Mixtapes To Get Us Through Summer In Quarantine

Bonfires with our friends, balmy summer days spent by the lake passing a spliff and sipping on a Corona, summertime love affairs—it all may feel like a past life now.

The rollout for summer 2020 is unlike anything before it. While Americans everywhere try to retain a sense of normalcy, it will be impossible to enjoy summer the way we want to. Bitter nostalgia for the summers of yore is rampant. Luckily, music has remained the one constant. To help unwind in these times of heightened anxiety, it helps to revisit some of the mixtapes that brought us childhood bliss, that pumped us up when school dismissed for summer, that blasted through our car speakers as we cruised with the windows down with our friends in tow. Here are a few of the greatest mixtapes of summers past, in the hopes it will bring back the fond memories that, right now, may feel distant.

13 Celebrities Who Are Feeling the Bern

These stars have publicized their support for Bernie Sanders.

Recently, Twitter was gifted with visual documentation of Ariana Grande's biggest smile ever.

This is only the most recent example on a long list of celebrities declaring their love for Senator Sanders. Below, we're sharing just a few well-known stars and Internet personalities who have declared that they're feeling the Bern.

The musician Weyes Blood—whose incredible album Titanic Rising we named one of last year's best—started 2020 by meeting her candidate of choice. The singer-songwriter, real name Natalie Mering, shared a photo of herself and Sanders, publicizing her decision for the 2020 race.

"I been reading about Bernie Sanders and I'm really sad how we let him down in 2016," the "Bodak Yellow" rapper tweeted over the summer, emphasizing that improving the country has been a proven passion of his and "not a new front for a campaign." In August, the unlikely friends appeared in a campaign video together, in which Cardi interviewed Sanders about social issues especially relevant to his platform, including police brutality, DACA, and the student debt crisis—from a nail salon, naturally.

Though Mulaney once subtly compared Donald Trump in the White House to a horse in a hospital, the Big Mouth comedian keeps his political opinions separate from his jokes. It might be surprising, then, to know that Mulaney donated at least $1,250 to Sanders' 2016 campaign. "I have a problem with 'Comedians are really brave and we need them now more than ever,'" he told Esquire this year. "It's like, we're not congressmen. We're court jesters." In that case, Mulaney's the most generous court jester we know.

Woodley made headlines in 2016 after being arrested while protesting the Dakota Access Pipeline, but it didn't put a damper on her political activism. "I'm ready for the political revolution and all in it for Bernie Sanders," the Fault In Our Stars actress tweeted in June.

On a Late Show With Stephen Colbert appearance this month, Ruffalo explained that he's been feeling the Bern since the 2016 election. "The rest of the United States is just finally caught up to what [Sanders] has been doing his entire career. And you know that when he gets into office, he's going to be fighting for us," the Avengers: Endgame actor said.

As a comedian and "actual young person" on The Daily Show, Twitter has become a major outlet for Young-White, so it makes sense that that's where he'd declare his endorsement. He kept it simple in the caption of a mirror selfie, in which he's wearing a Bernie t-shirt: "im a bernie bro." 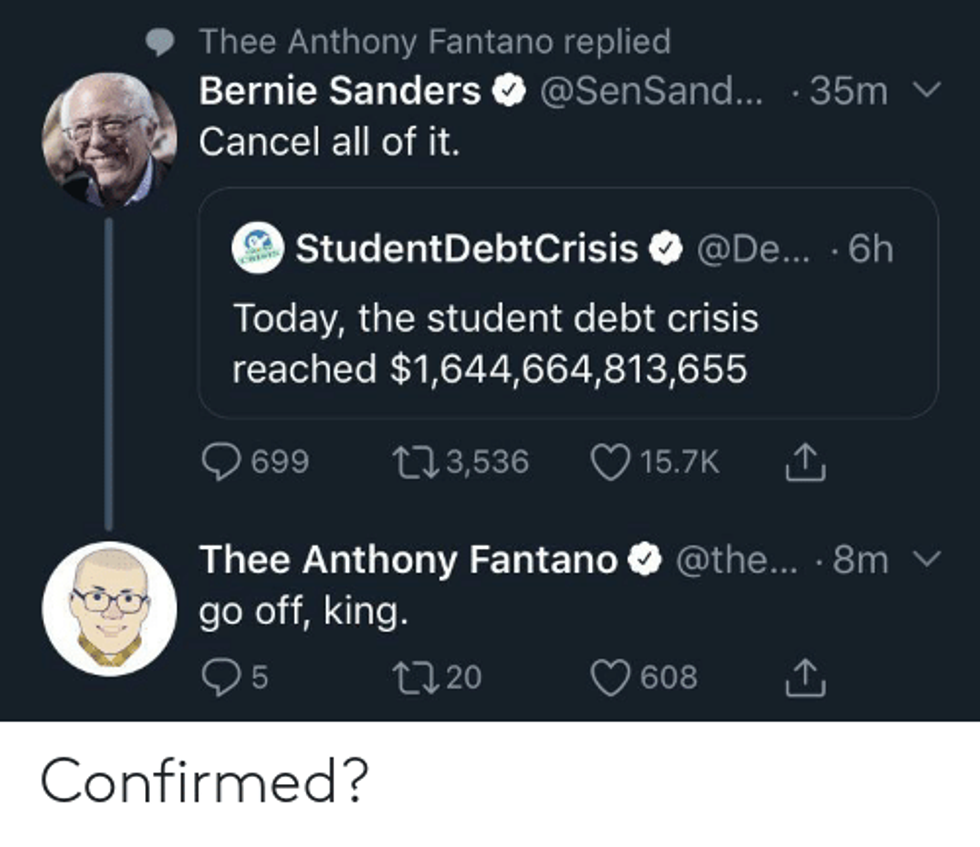 On his YouTube channel theneedledrop, Anthony Fantano has made a name for himself divulging his divisive opinions on music. But he has firm opinions on politics, too: "[Joe Biden's] brain is MELTING, and winning the primary will only lead to an inevitable implosion," the Internet personality tweeted after a Democratic debate in September. "Stop messing around with this fool and support other candidates—preferably Bernie." 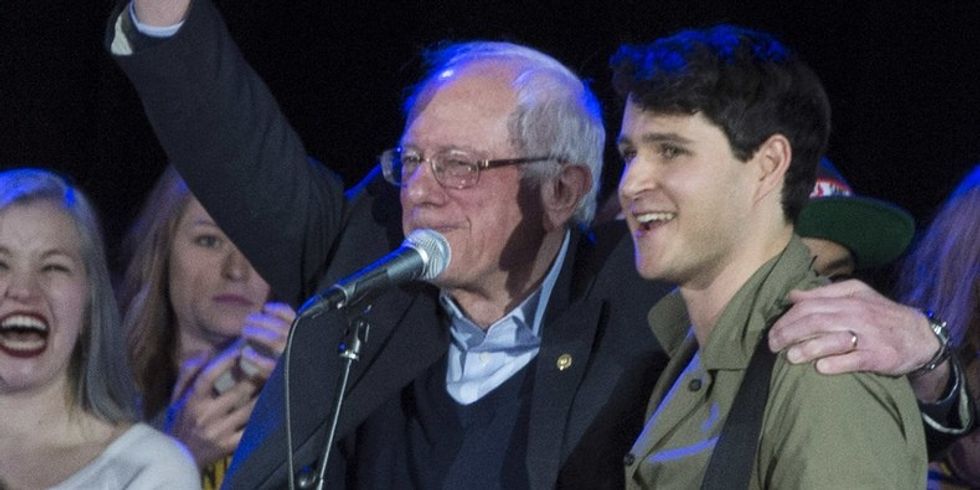 Koenig also supported Sanders in 2016, and said his band Vampire Weekend would like to "help out" the candidate in the 2020 election, too. But it's hard to match the energy of Sanders' first run: "I like to believe he's less of a sociopath than a lot of people who want to be president, but it's hard to be as excited as I was in 2016," Koenig told The Times. "That was the first time I felt deeply about a candidate."

Noname is no stranger to supporting a good cause—she started her own book club this year—and publicizing her endorsement of Sanders is only the latest on her to-do list of deeds. She simply tweeted the candidate's name with a green check mark emoji.

Cyrus can also add activist to her resume, having founded the Happy Hippie Foundation to help trans and LGBTQ+ youth. It's no surprise that her views are in line with Sanders. When the senator shared Cardi B's tweet, he shared it on Instagram, to which the edgy pop star replied "True!"

Sanders fans were thrilled when the senator announced he was running for president again in February, and Lil Yachty was one of them. The red-dreadlocked rapper retweeted Sanders' campaign video with a straight-to-the-point "Let's gooooo" in solidarity. 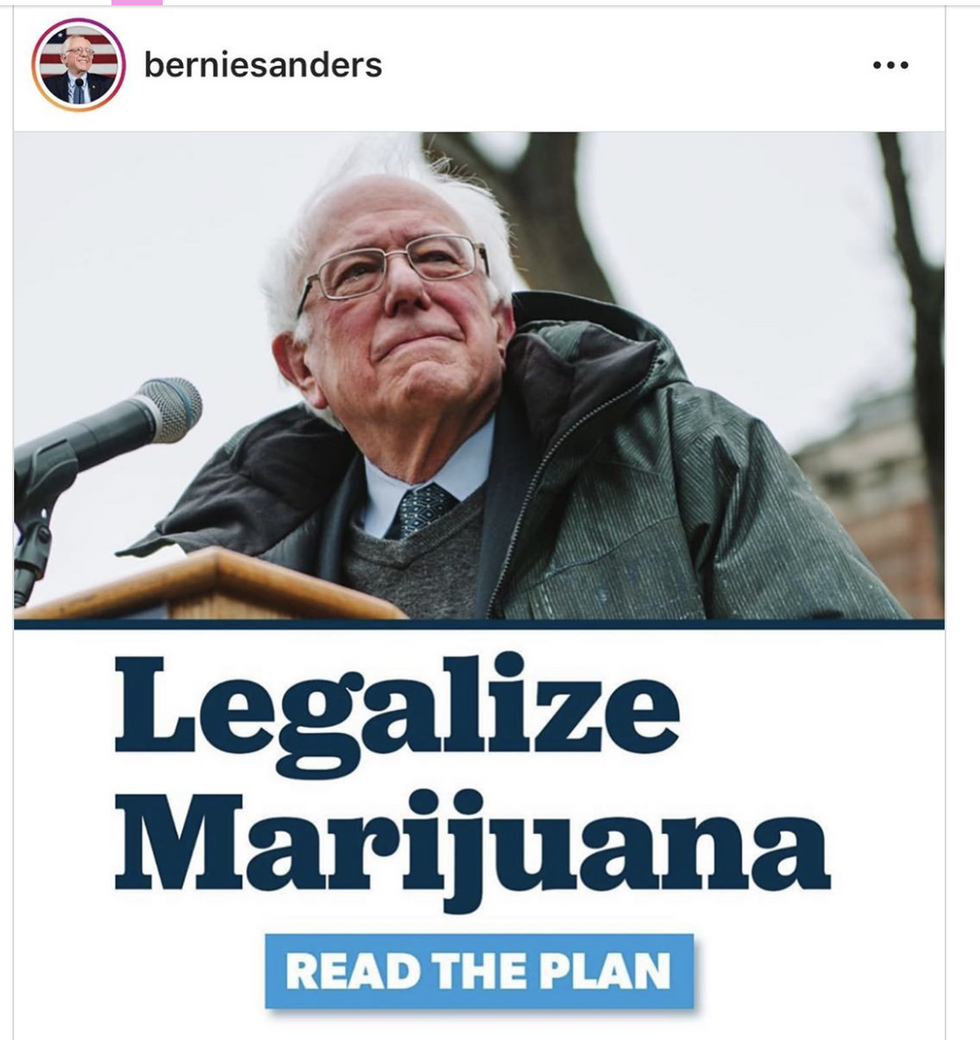 Sanders has long been vocal about legalizing marijuana, evidently a selling point for Eric Andre. "Can we please give this guy the keys to the whitehouse already?" the comedian implored on Instagram, captioning a photo promoting Sanders' plan for legalization.

Gordon, founding member of the iconic rock band Sonic Youth, used an adorable photo of her dog to share her endorsement: "Go Bernie!" she captioned an Instagram photo of her dog pawing a Bernie pin.

From Your Site Articles
Related Articles Around the Web
bernie sanders