Every week one of Popdust's disposable clones — grown in a vault deep beneath the Mojave desert — is exposed to the outside world through a relentless feed of news, pop culture, and social media.

The arduous process accelerates their dissolution back into an amorphous clone slurry. But before they go, they leave behind a document of what they've absorbed and what they've learned — a time capsule preserving a single moment in the slow-motion collapse of civilization. An End Times Update...

A girl can dream.

American Horror Story is gearing up for its 10th season, and Sarah Paulson, Evan Peters, Finn Wittrock, Lily Rabe, and Kathy Bates are signed up to return. So is Macaulay Culkin, and that fact alone is the only reason that I might actually watch the show.

Don't get me wrong: I loved AHS when it first came out. Murder House disturbed me more than most horror flicks ever have, and Asylum and Coven were both wonderously twisted and genuinely well-written. But somewhere along the way, things started getting formulaic. The excess of violence felt less purposeful and more like empty gore. The campiness felt less resonant, the characters less sympathetic. By Hotel, I was done.

I never thought I'd return to American Horror Story. I did binge-watch Roanoke during a rather low period in college, but watching that miserable show actually might qualify as self-harm more than anything else. I stumbled on someone watching an episode of 1984 while home for the weekend and felt my insides shriveling up like the baby corpses in the basement of the murder house.

That might be the only hope the series has left. Culkin could star as a haunted, washed-up former child actor who continues to relive the traumas of his notorious near-death experiences during the filming of Home Alone. The whole thing could be a commentary on childhood and memory and the thin lines between commodity and tragedy. It could be about the commodification of violence in Hollywood and mostly just about Macaulay Culkin, waking up screaming in the night as he hears yet another killer trying to break into his home.

Most likely, AHS's 10th season will be called something like "AHS: Martians," "AHS: Zombies" or "AHS: Beach House." I may also be converted by a show called "AHS: Climate Change," but that might be too real.

You can watch the ominous and admittedly aesthetically pleasing first glimpse below, via Ryan Murphy's Instagram account:

Despite all the headlines that have spread rumors about him over the years, Culkin actually seems to be doing quite well. He's dating Brenda Song, and he has a satire website called Bunny Ears, a podcast with 100+ episode, and two cats named Apple and Dude. He was once in a pizza-themed comedy band and his legal name is "Macaulay Macaulay Culkin Culkin." And now we'll get to see him embroiled in at least a few brutal murders.

Macaulay Culkin Opens Up About His Childhood Friendship With Michael Jackson

The friendship between Michael Jackson and Macaulay Culkin has raised eyebrows since the early 90's. But according to Culkin, it shouldn't. On a recent edition of "Inside of You With Michael Rosenbaum," the Home Alone star discussed his relationship with the king of pop.

The pair were separated by a 22-year age gap, which caused concern and media buzz, particularly after Jackson stood trial in 2005 on charges of child molestation, for which he was found not guilty. Culkin said the only reason people question the friendship is because of Jackson's fame. "It's one of my friendships that people question, only because of the fact that he was the most famous person in the world. I was a peerless person. Nobody else in my Catholic school even had this much idea of what I was going through, and he was the kind of person who'd been through the exact same frickin' thing and wanted to make sure I wasn't alone." Culkin later described Jackson as "gentle" and "hilarious." "For me, it's so normal and mundane," Culkin said. "I know it's a big deal to everybody else, but it was a normal friendship."

While it may be true that there was never anything illicit or illegal about Jackson's relationship with the young actor, it does raise questions about the suitability of a friendship between an adult and a child. Culkin claims that Jackson's interest in him was in part because of Culkin's indifference to fame. "I really didn't give a shit about famous people. I was thoroughly unimpressed by them," he remembered. "So when I first met him I was like 'oh cool, you're that guy who sings songs. I sing songs in school. That's great. So anyway.' I think that's also one of the reasons why we got along. Everyone was always thoroughly impressed by him, so the fact that there was somebody treating him like a normal person, it really was that simple."

Brooke Ivey Johnson is a Brooklyn based writer, playwright, and human woman. To read more of her work visit her blog or follow her twitter @BrookeIJohnson.


This Egg is Hotter Than Kylie Jenner

After polling fans on his website bunnyears, the actor announced "Macaulay Culkin" beat out "Publicity Stunt" as his new legal middle name.

On Christmas Day, the actor took to Twitter (his handle is @IncredibleCulk) to announce the winner of a contest in which he'd invited his fans to vote for his new legal name: "My new middle name has been chosen. You voted and the winner is clear. In 2019 my new legal name will be: Macaulay Macaulay Culkin Culkin. It has a nice ring to it (if you like my name)."

Merry Christmas to me, from all of you! My new middle name has been chosen. You voted and the winner is clear.… https://t.co/ZmwOLL89cr
— Macaulay Culkin (@Macaulay Culkin)1545750950.0

The contest was run on the actor's website, which he describes as a hybrid of Goop and The Onion: bunnyears: Macaulay Culkin's gentle internet hug. The post reads: "My middle name is something dumb. Larry? Orange? Honestly, I can't even remember it. So I asked you all to send in some better options so I can go down to the courthouse and explain to a judge why I need to change my middle name to something cool."

After what appear to be over a hundred thousand votes (which on Culkin's tongue-in-cheek website could be arbitrary estimates), he appeared on Jimmy Fallon to announce the five finalists: Shark Week (which he's never seen), Kieran (which his brother, Kieran, suggested), The McRib Is Back (excellent), and Publicity Stunt (far too meta). He vowed that he was "seriously" going to change his name, promising Fallon he'd return to show him his new ID.

When Fallon asked his thoughts about "Macaulay Culkin" as an option, the actor imagined the perfect scenario, telling Fallon, "So if somebody comes up to me at the airport and says, 'Excuse me, are you Macaulay Culkin?' I go, 'Well, Macaulay Culkin is my middle name.'"

Culkin is well-acquainted with publicity stunts, though it might be more accurate to say that he mocks publicity stunts by being so overt about them. For instance, in a wildly successful Google commercial that debuted less than a week before Culkin's Twitter announcement, the 38-year-old actor reprised his role as 10-year-old Kevin McCallister. The one-minute long commercial re-enacts iconic moments from Home Alone if Kevin had Google Assistant at his disposal.

In an appearance on Ellen earlier this year, he told Degeneres how as an adult he's thankful for his early work, stating, "I felt like some kid worked really really hard and I inherited all of his money...It allows me to treat everything like a hobby." He announced the launch of his podcast Bunny Ears, in which he and a co-host "talk about things, and stuff, and stuff," all saturated with the same irreverent tone used on his website cheeky enough to ask fans to re-name him.

American Art Will Flood the Internet on New Year's Day

Celeb Social Media Photos Of The Week—Cool, Not-So-Cool And WTF?

Hollywood’s hottest, most self-obsessed and controversial stars like the Kardashians, Beyonce, Lena Dunham and Selena Gomez were very busy this week, celebrating Mother’s Day, showing off their skin-and-bones, posing for selfies, and trying to prove that all is well in their world.

If you are too busy to scour all the sites for the images, Popdust has the rundown for you of the coolest, not-so-cool and WTF celeb social media pics in our weekly photo feature. 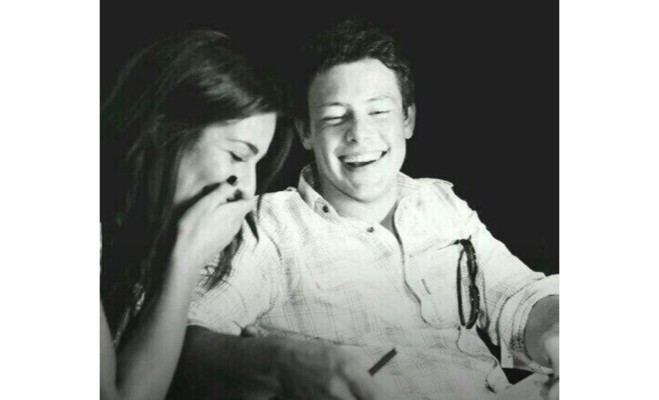 Previous Next
The Cool: Lea Michele honored her late boyfriend, Cory Monteith, on his birthday. 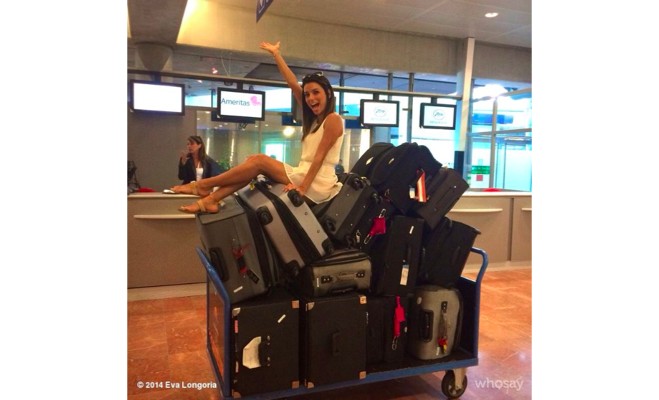 Previous Next
The Cool: Eva Longoria rode the luggage cart, arriving in the South of France for the Cannes Film Festival. 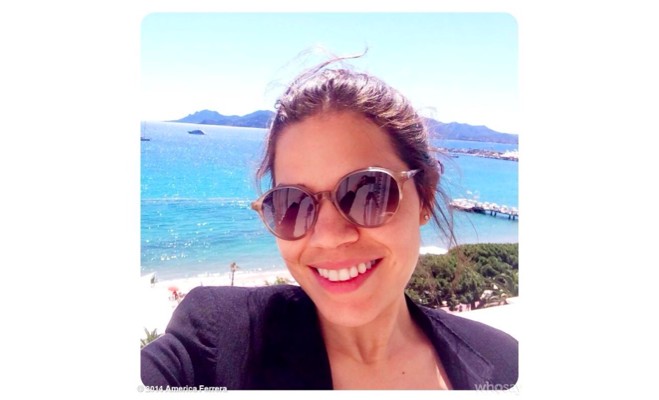 Previous Next
The Cool: America Ferrera shared the view of Cannes with her fans. 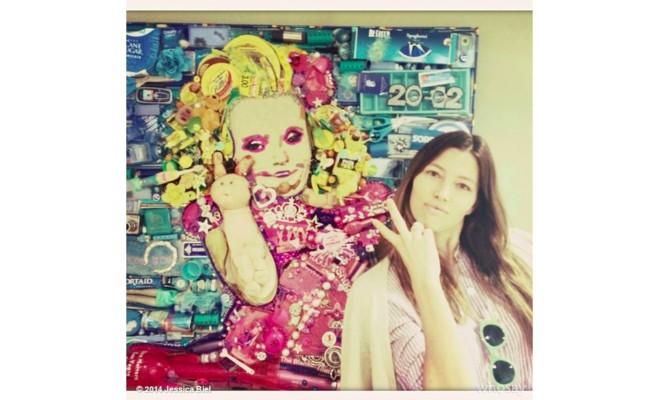 Previous Next
The Cool: Jessica Biel flashed a peace sign while imitating art. 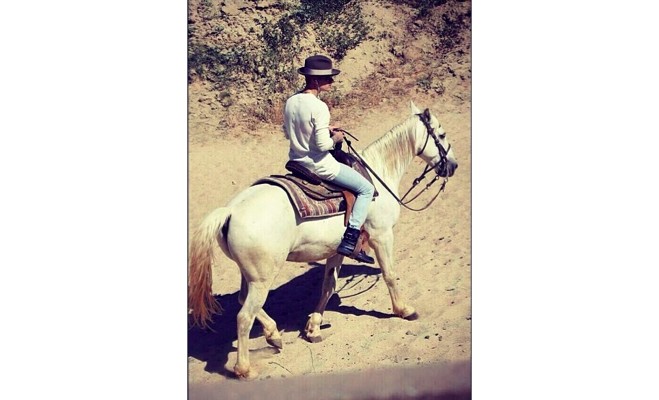 Previous Next
The Not-So-Cool: Justin Bieber rode a horse in skintight pants and compared himself to a “young Indiana Jones.” 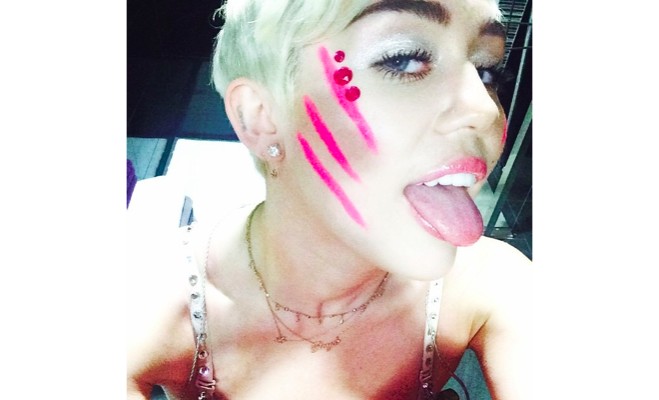 Previous Next
The WTF?: While Miley Cyrus, who was under fire this week for her date rape jokes at a gay club, posted a bunch of bizarre photos with her face painted. She was with her mom and Flaming Lips singer Wayne Coyne to make matters more confusing. 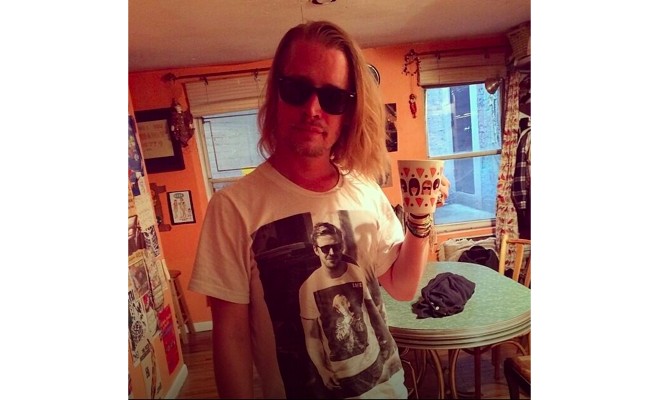 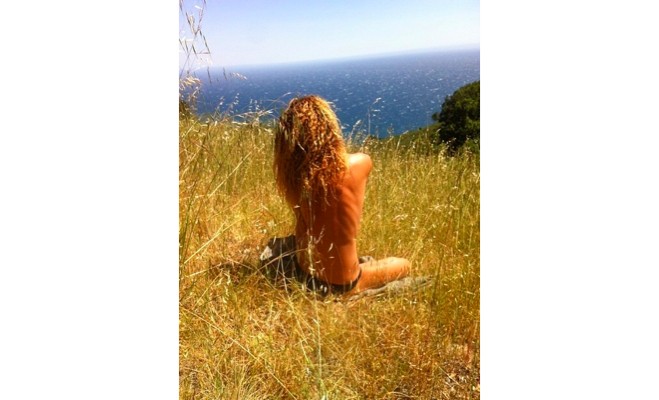 Previous Next
The Not-So-Cool: Anorexia is not cool, Erin Wasson. The model flaunted her skin-and-bones figure in this “Live a little” Instagram snap. 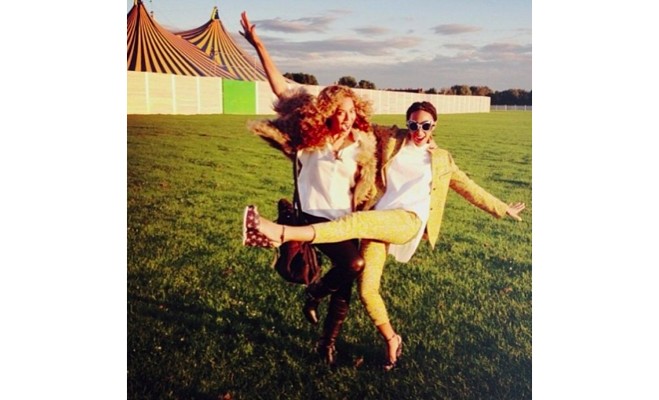 Previous Next
The WTF?: Days after the Solange/Jay-Z Met Gala afterparty elevator brawl tape went viral, Beyonce posted a slew of snaps of her and her little sister all cozy and crap. 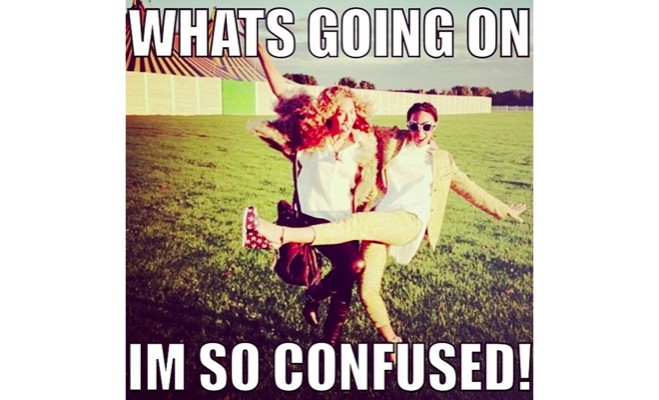 Previous Next
The Cool: Even Lily Allen found this bizarre. 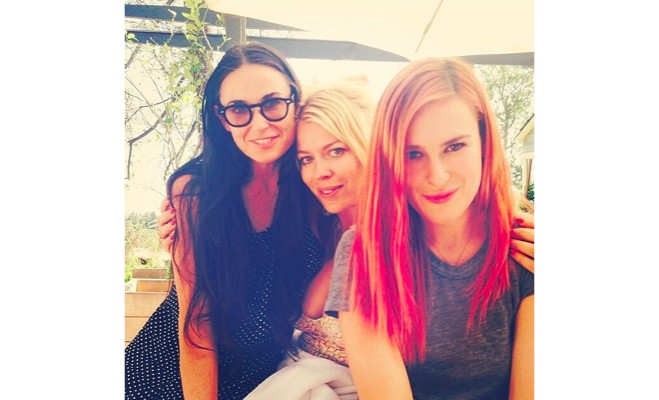 Previous Next
The WTF?: Rumer Willis dyed her hair pink for reasons I will never agree with. In other “who cares” news, she also spent Mother’s Day with Demi and Amanda de Cadenet. 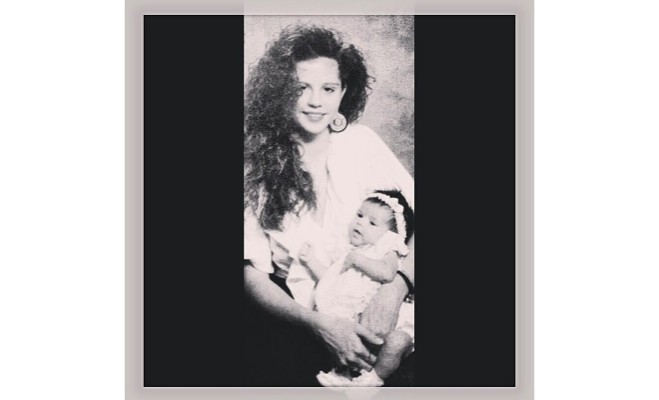 Previous Next
The Cool: Selena Gomez honored her mother Mandy on Mother’s Day with a flashback photo. Mandy was only 16 when she gave birth to the star. 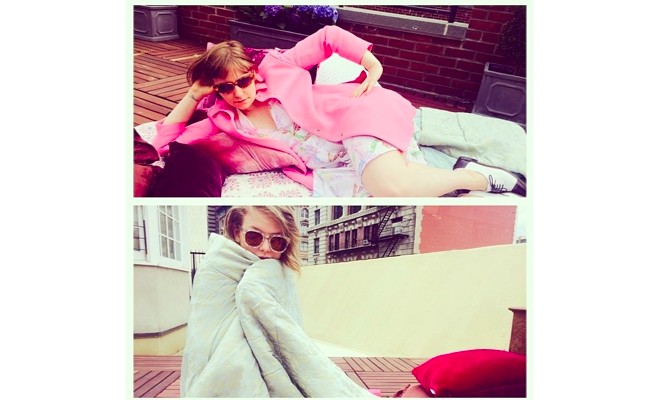 Previous Next
The Cool: Taylor Swift wished her pal and “favorite person to have picnics with,” Lena Dunham, a happy birthday. 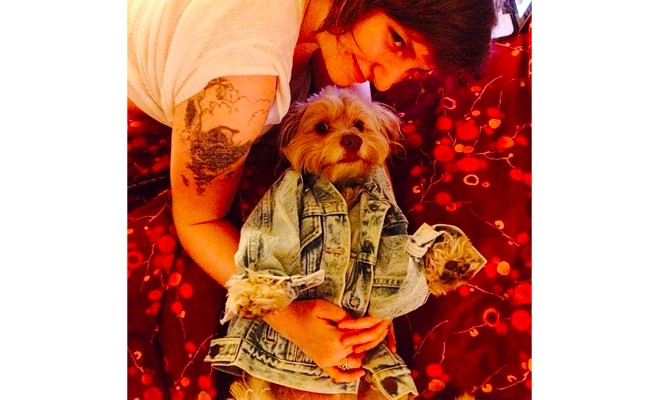 Previous Next
The Cool: And Lena Dunham dressed her dog up in a denim jacket, making a Grease 2 reference (I thought I was the only one who had that movie memorized) by captioning the snap, “I need a cool rider.” 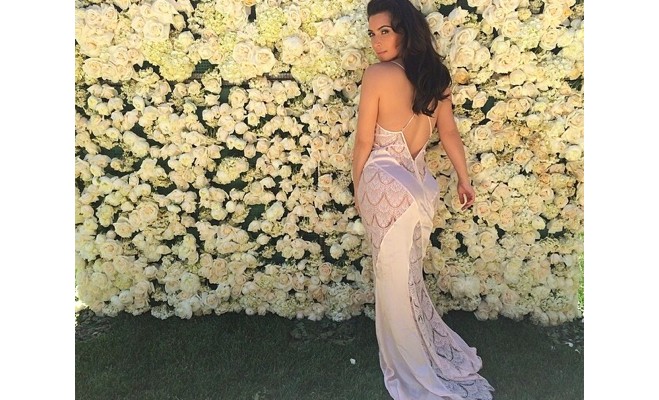 Previous Next
The Not-So-Cool: Kim Kardashian showed off her famous derriere and the wall of white roses Kanye West gifted her for Mother’s Day. Not to brag or anything. 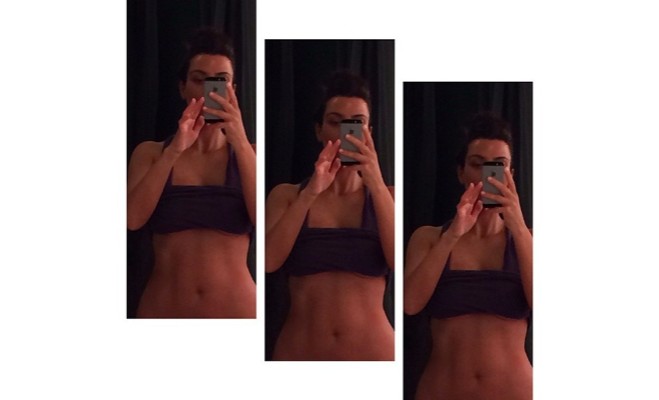 Previous Next
The Not-So-Cool: She also had to show off her abs after a workout. Just stop already. 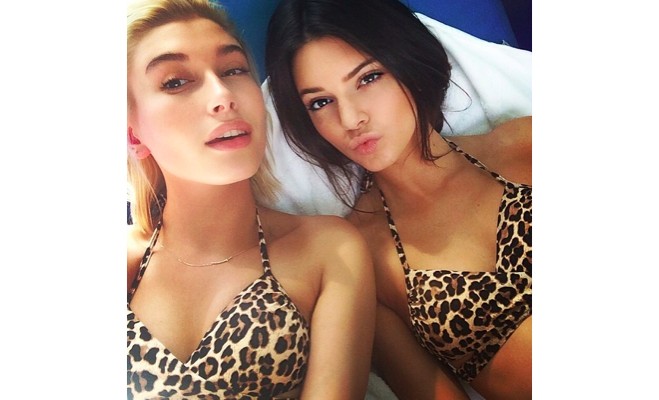 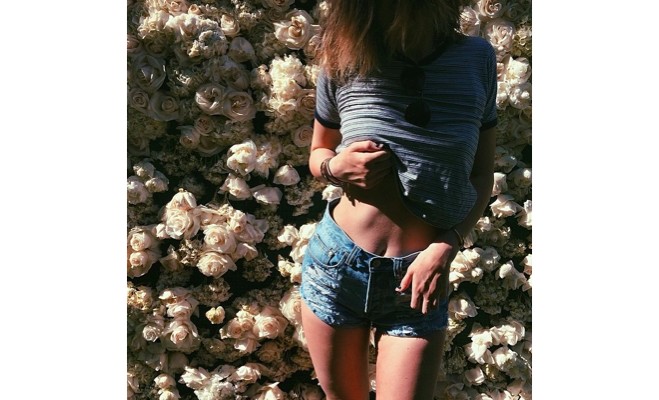 Previous Next
The Not-So-Cool: While her 16-year-old sister Kylie flashed her abs in a way too sexy snap in front of Kim’s wall of roses. I am guessing Kim took this photo and doesn’t care that her little sister is already sexualizing herself. 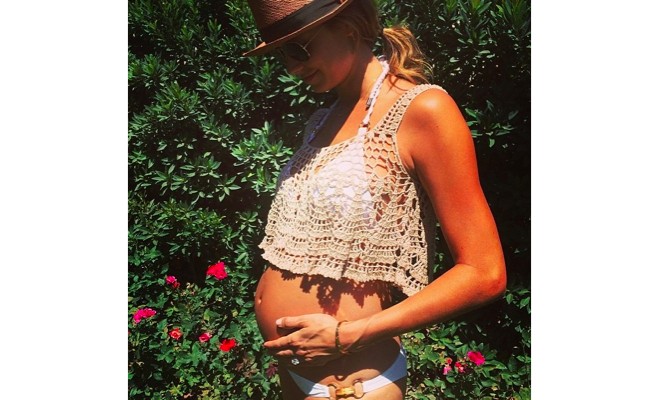 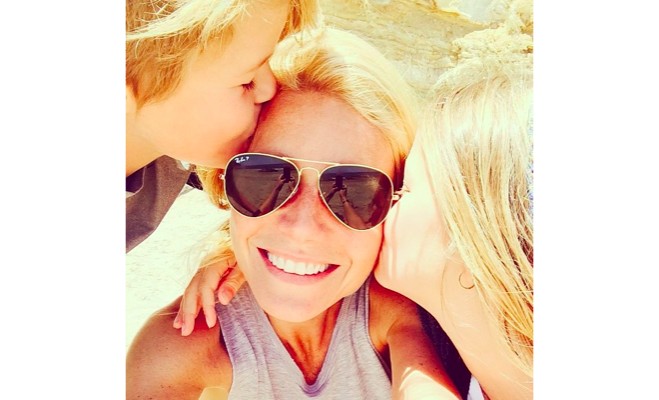 Have Fun Wrapping Your Brain Around This T-Shirt

Prepare to make this face:

Ryan Gosling better be at least thinking about making this picture into a t-shirt...