Update: Lucian Chalfan, a spokesperson for the New York court system confirmed Thursday evening that Mary-Kate Olsen's emergency divorce filing had been denied. Currently the courts are only considered emergency and essential divorce filings, and the judge presiding over the matter determined that Olsen's petition for divorce, "was not an essential matter."

Hold on to your hats people, Full House is coming back!

According to TV Line, Netflix is going to bring back a sequel show titled Fuller House.

Details are under wraps, but the report says that the show would feature DJ Tanner (Candace Cameron Bure) and Kimmy Gibbler (Andrea Barber) for a 13 episode series produced by John Stamos.

There are rumors of cameos by Stamos, Bob Saget and Dave Coulier!  Yes Please!

It's 20 years since the original series aired it's final episode  so the timing is great!

Who's money is on an appearance by Mary-Kate and Ashley?

Mary-Kate and Ashley Olsen made their Vine debut on Monday - but someone should tell them what Vine actually IS.

The 28-year-old twins were posing for what they thought was a photo with New York Times fashion director Vanessa Friedman at Mercedez-Benz Fashion Week.

What results is a very weird, awkward 'holding this pose for as long as I can!' Vine that shows just how dedicated these girls are to taking the perfect photo.

The best part is the CREEPY way Mary-Kate's eyes keep darting around while she keeps her pose like a statue.

From the red carpet of the star-studded and somewhat ridiculous Met Ball Gala to the hottest movie premieres, celebs like Rihanna, Angelina Jolie, Rita Ora and Kim Kardashian were dressed to rock and shock this week – and let me tell you, there were a few upsets! 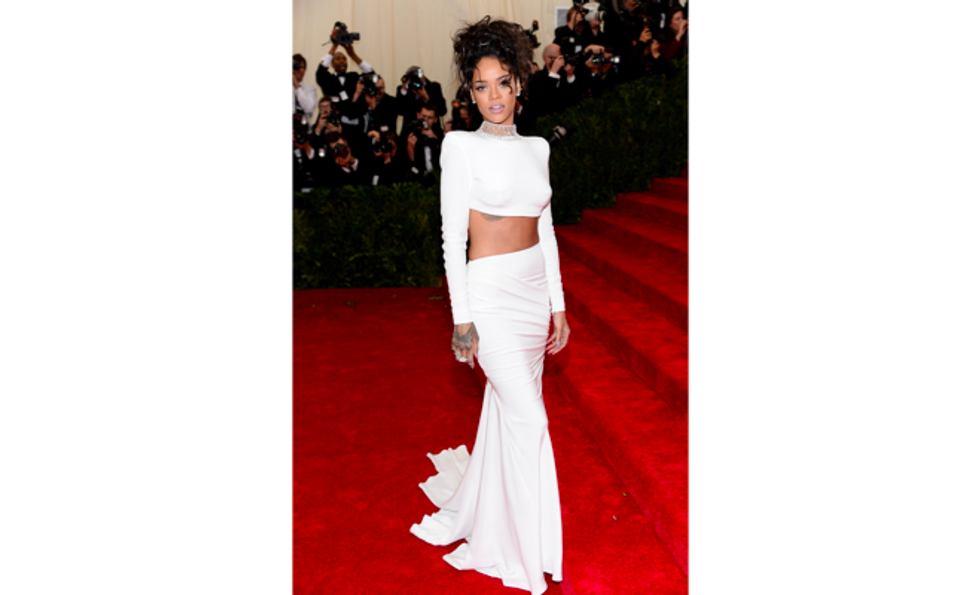 Previous Next
Best: Rihanna was like burning up in white-hotness at the Met Gala in her majorly cropped Stella McCartney gown. 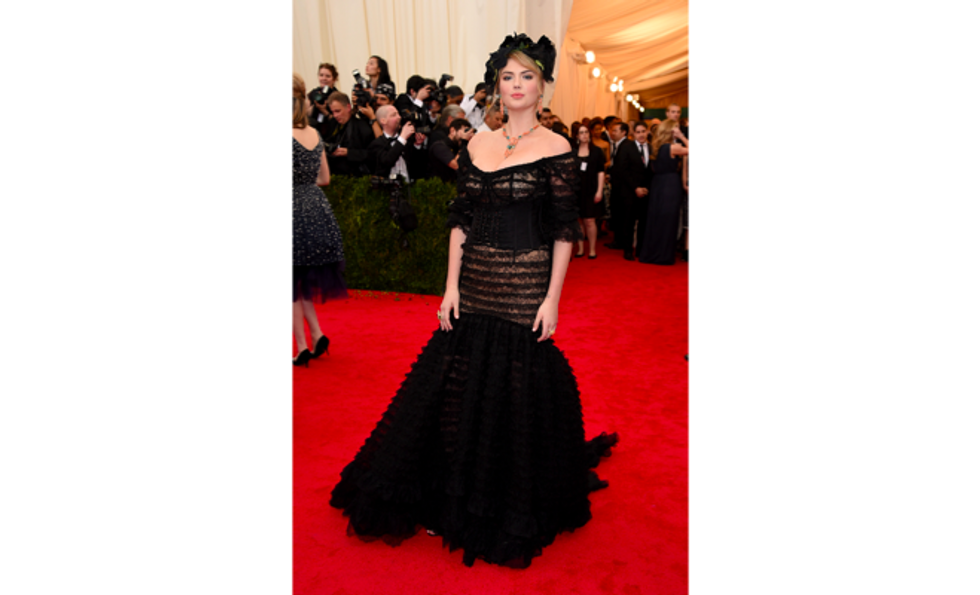 Previous Next
Most Ridiculous: And Kate Upton looked like a high class hooker who spent time in a western saloon. 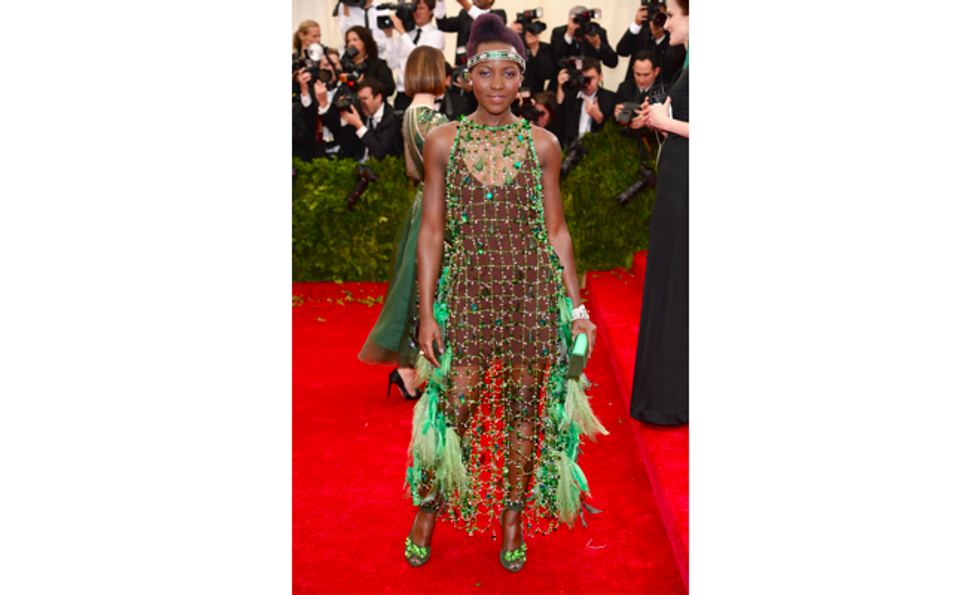 Previous Next
Worst: Lupita Nyong’o was the best dressed star of Awards Season, hands down, so I was shocked to see this 1930s prohibition swinger meets Pocahontas Prada ensemble on her. 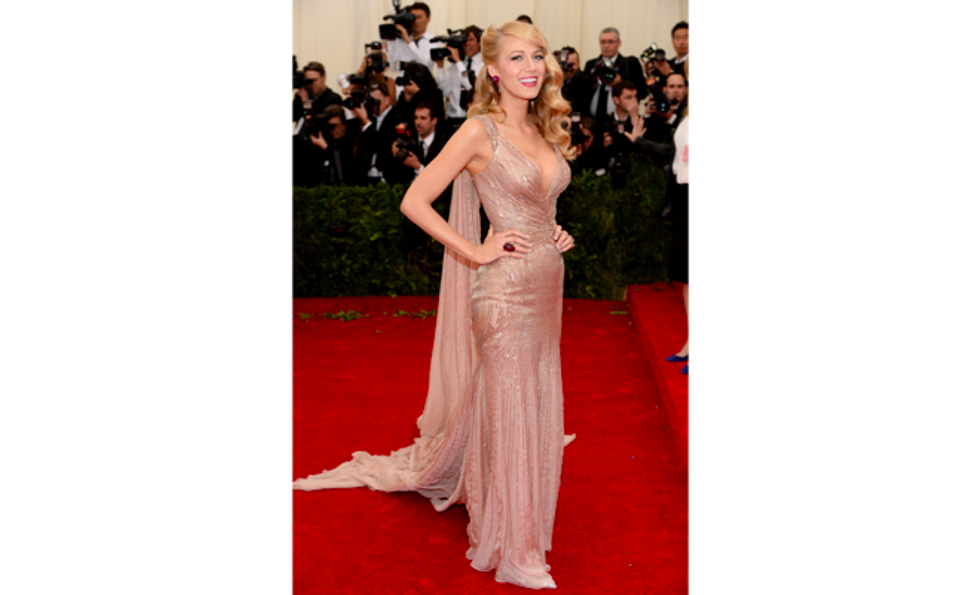 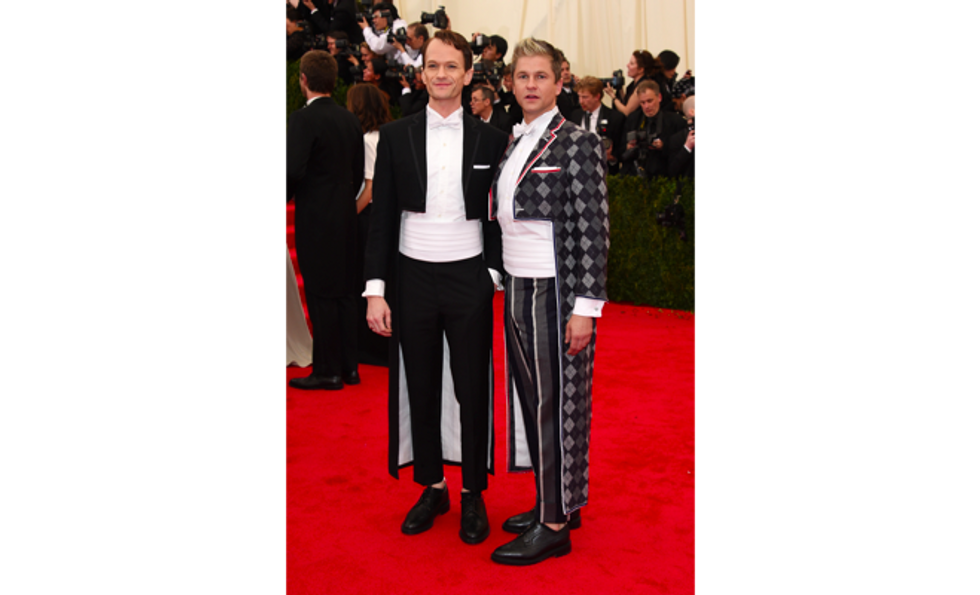 Previous Next
Most Ridiculous: Neil Patrick Harris will not be forgiven for dressing up like a Matador with his husband David Burtka. 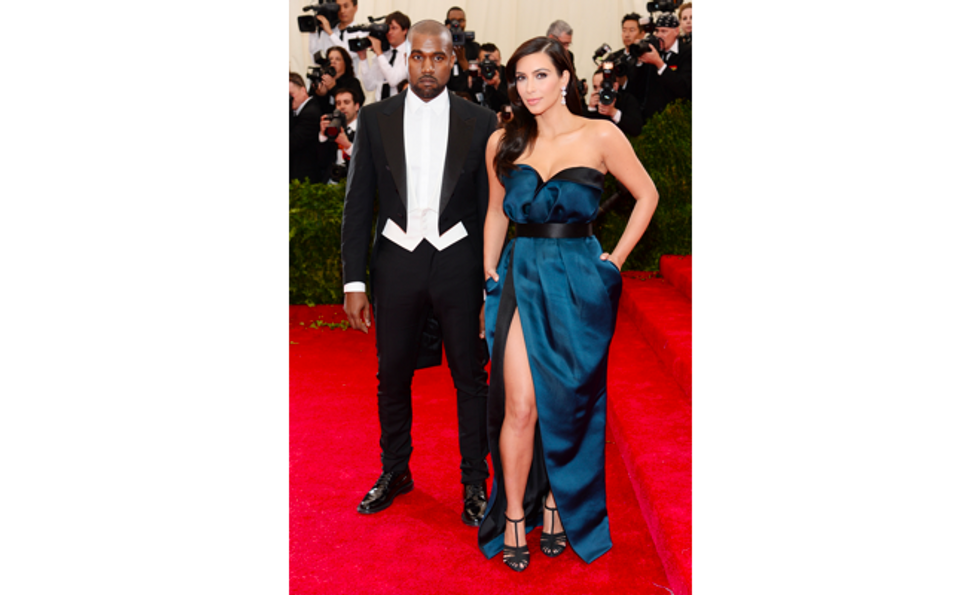 Previous Next
Best: Kim Kardashian is never a style winner in my book, but I have to give it to her on this one, although I’m still seriously pissed at Anna Wintour for inviting her to the Met Ball. Her Lanvin gown was gorgeous. Doesn’t Kanye look like a robot in this picture? I love it. 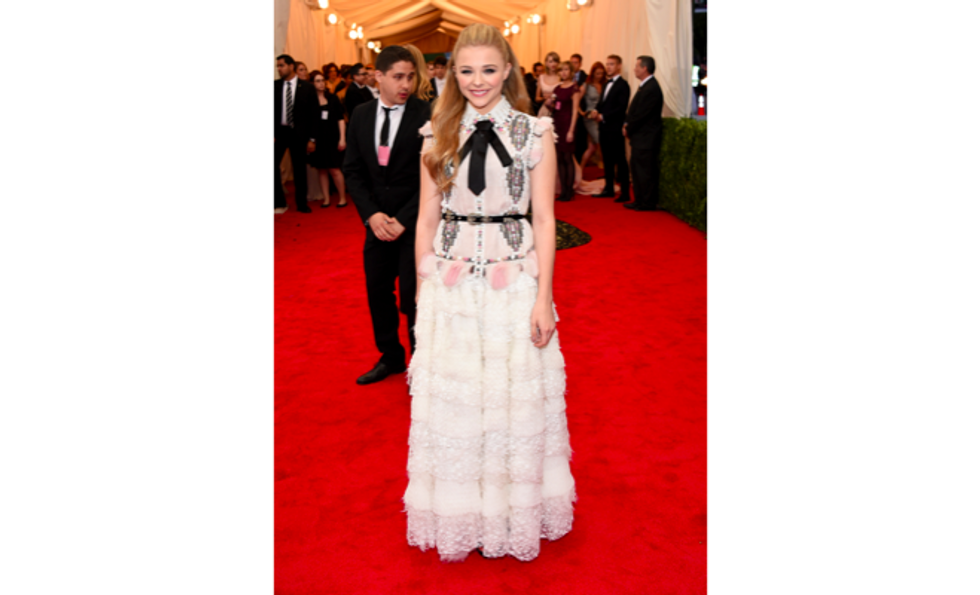 Previous Next
Worst: Chloe Moretz opted for a Chanel gown that sort of resembled something I would expect to see at a wild west wedding like a bizillion years ago. 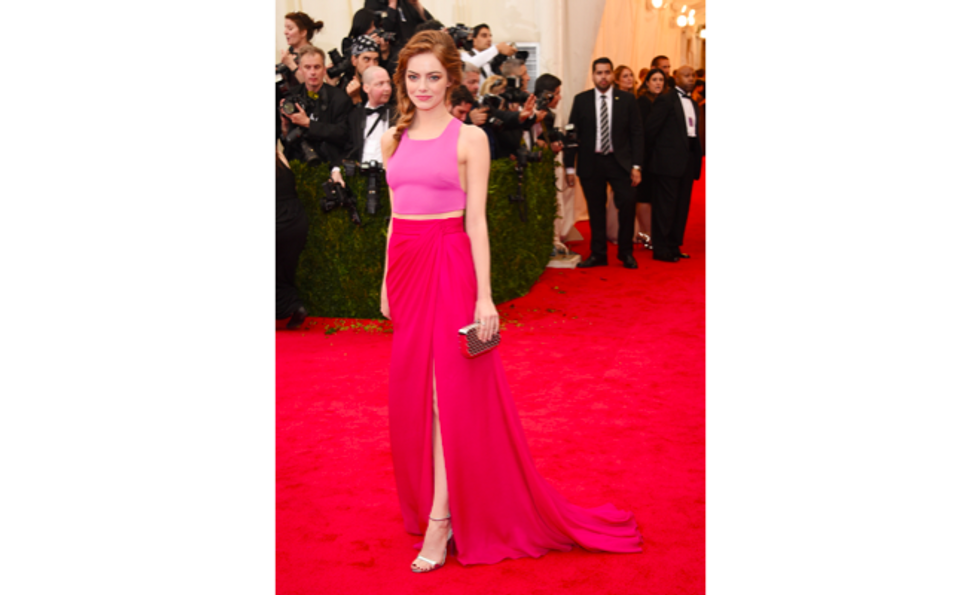 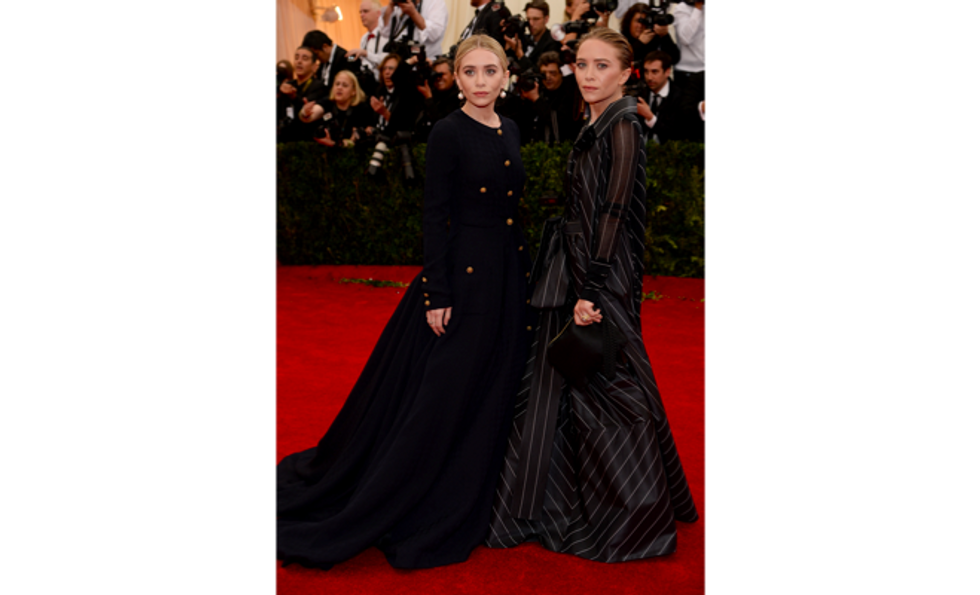 Previous Next
Worst: Oh look, it’s those old lady trolls, the Olsen twins, who looked about 80 in their body covering gowns. Why dress your age, when you can dress like an aging socialite. 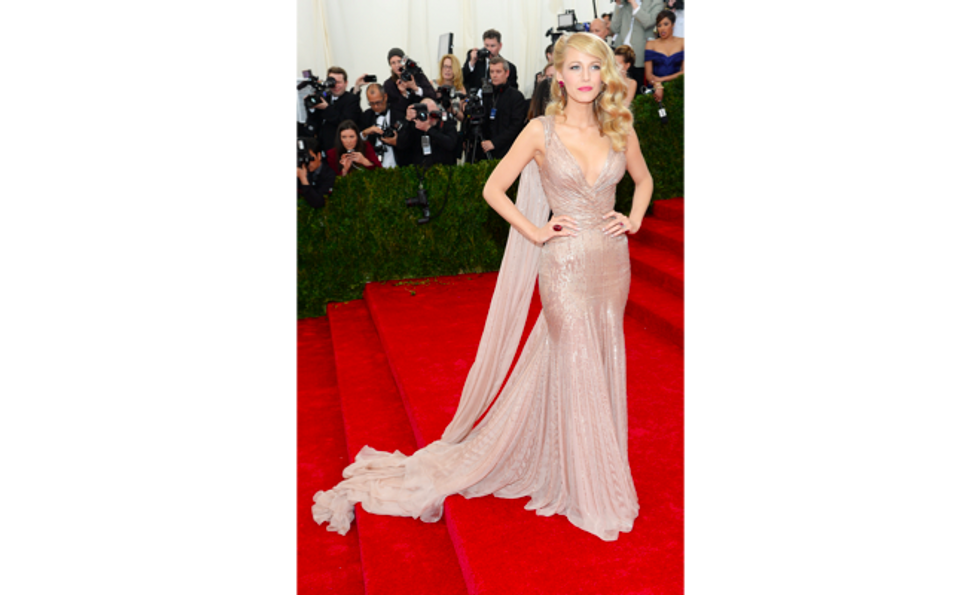 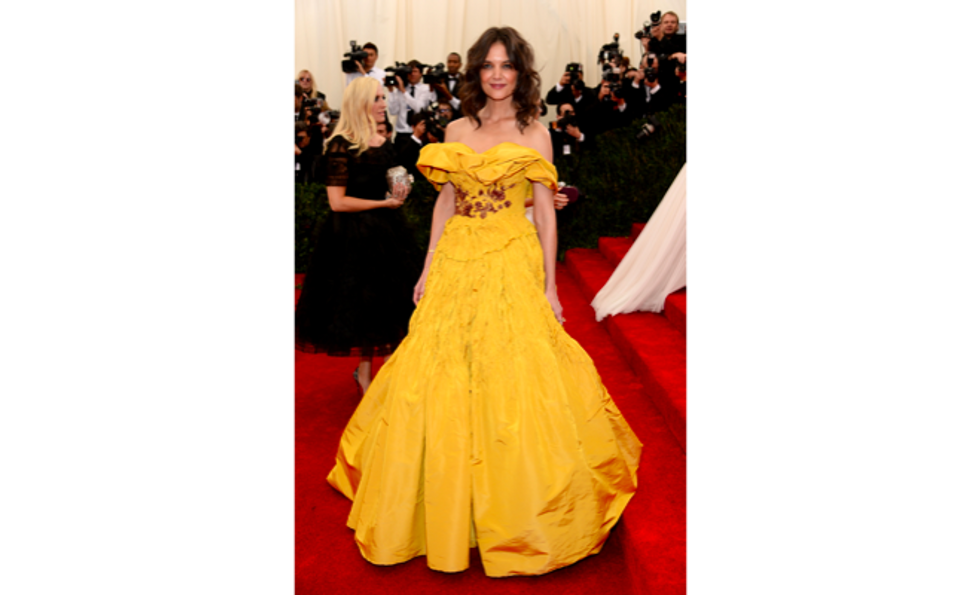 Previous Next
Worst: Inspired by the Disney princesses she met on vacation with Suri, Katie Holmes picked out this poufy yellow Marchesa thing. Tom Cruise is laughing somewhere with Xenu right now. 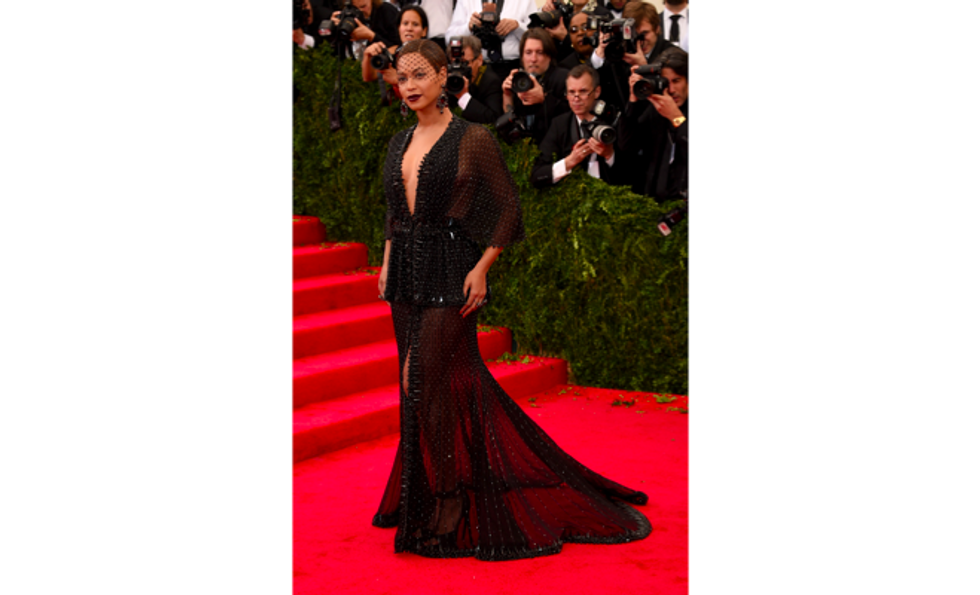 Previous Next
Worst: If Beyonce attended her own funeral this Givenchy gown and veil is totally what she would be wearing. 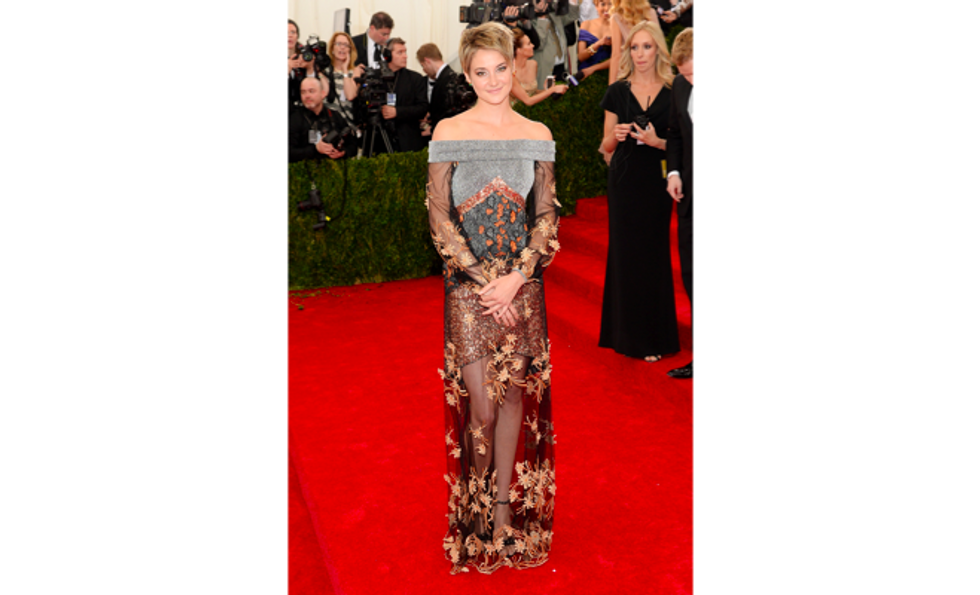 Previous Next
Most Ridiculous: Shailene Woodley, what the f is this? The Divergent actress wore this Rodarte thingy, which was not only unflattering but just simply hideous. 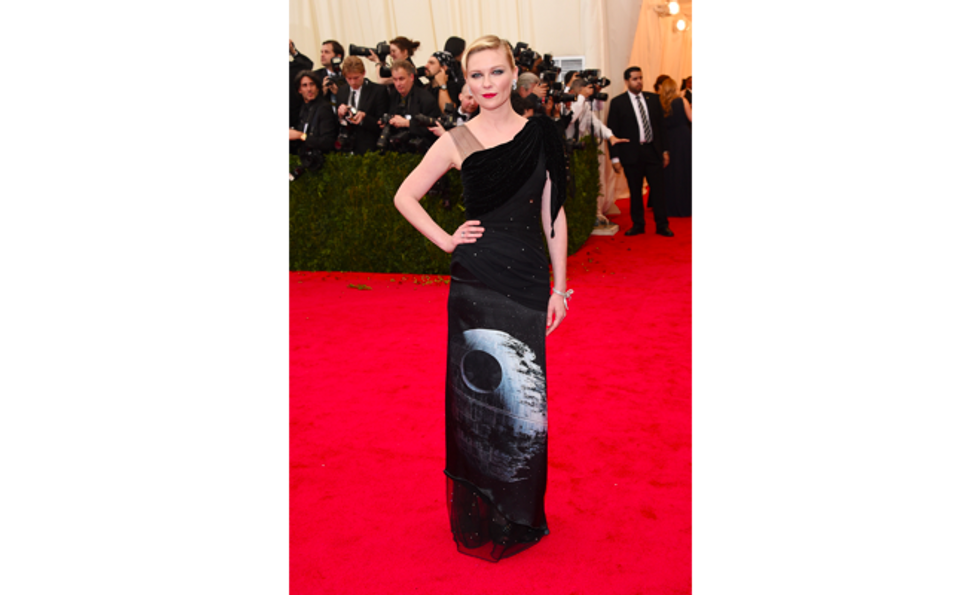 Previous Next
Worst: Of all the dresses out there, Kirsten Dunst had to wear this one? Seriously, you know you are like, on the D-list when this is what you get offered to wear to one of the most important events of the year. Sure, I’ll take the one-shoulder thing with the lunar print. Why, not? 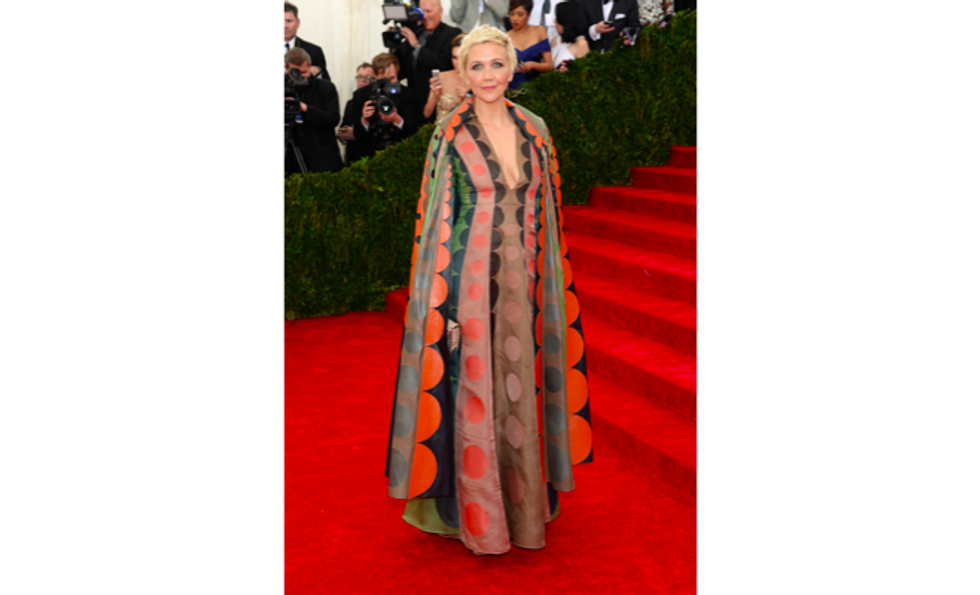 Previous Next
Worst: Maggie Gyllenhaal is my idol because like Lena Dunham, she clearly doesn’t care about being on a worst dressed list. Because there is no way she could have seen this hideously patterned Valentino house gown from the 70s and thought that it was really beautiful, right? 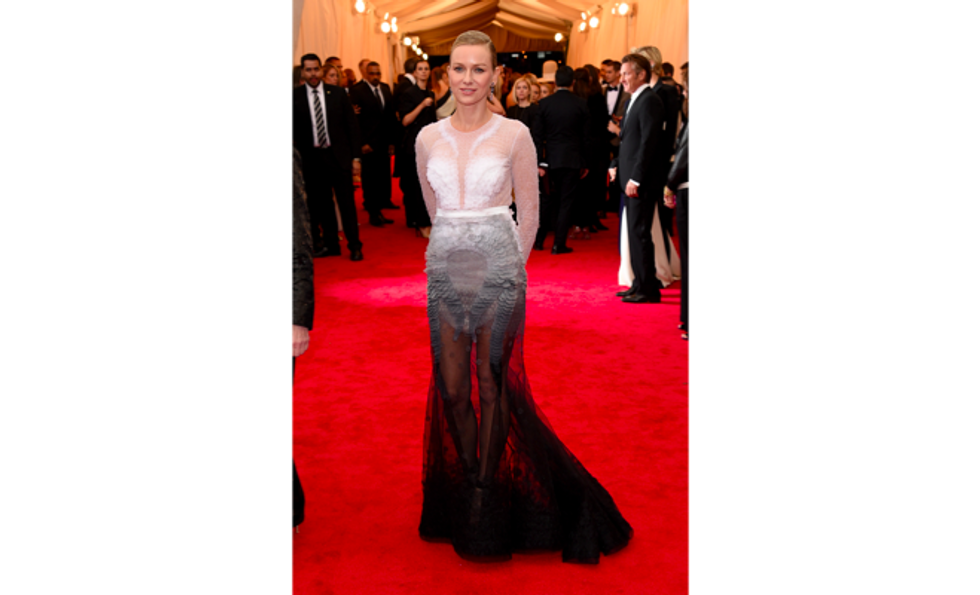 Previous Next
Worst: Naomi Watts, is that you? Because that Givenchy gown is SO not your style and looks totally awks on you. 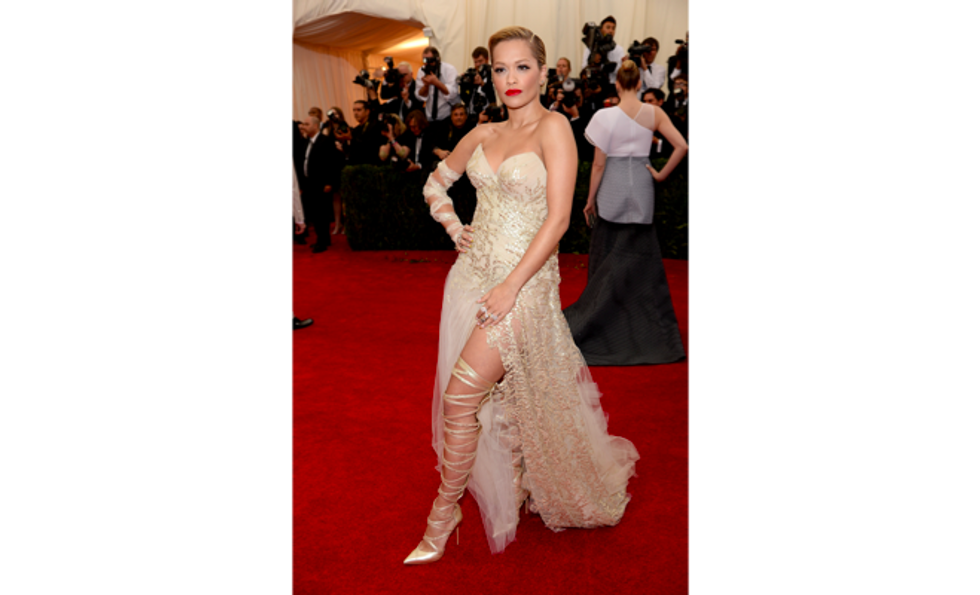 Previous Next
Most Ridiculous: When I think Rita Ora at the Met Gala, this hideousness is exactly what comes to mind. I love the way she coordinated her pointy toed gold gladiator thigh high heels with her arm band. 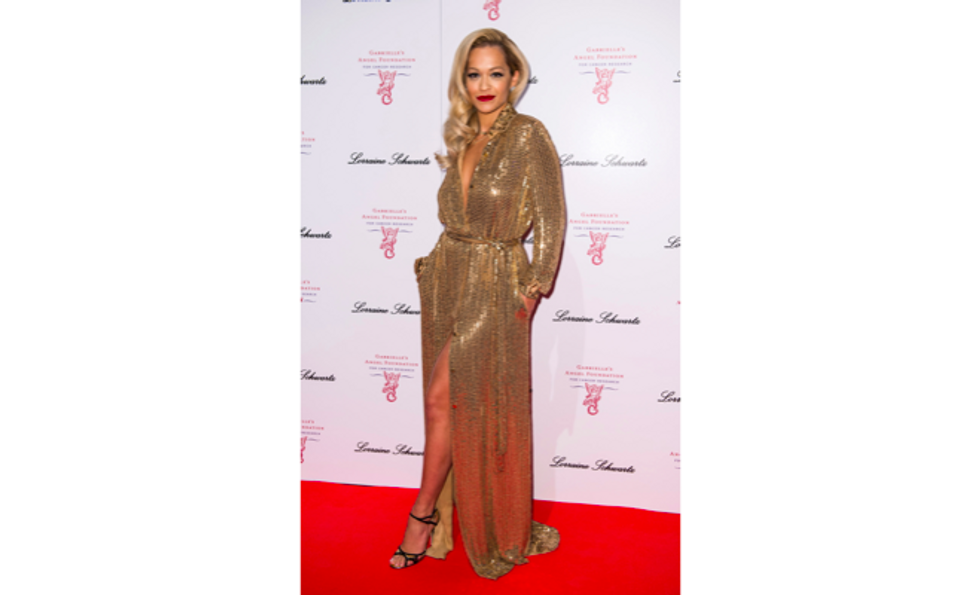 Previous Next
Best: Rita Ora was at the same event as Hohan, but she actually looked really classy in a slinky gold Pucci gown. 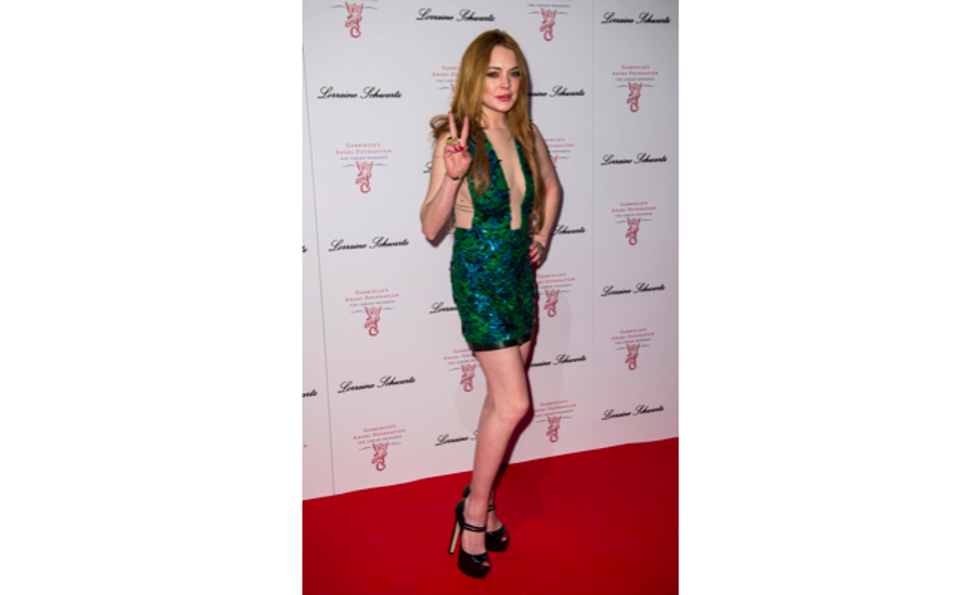 Previous Next
Worst: Lindsay Lohan is doing such a great job rehabbing her image and proving to the world she is a classy broad, isn’t she? 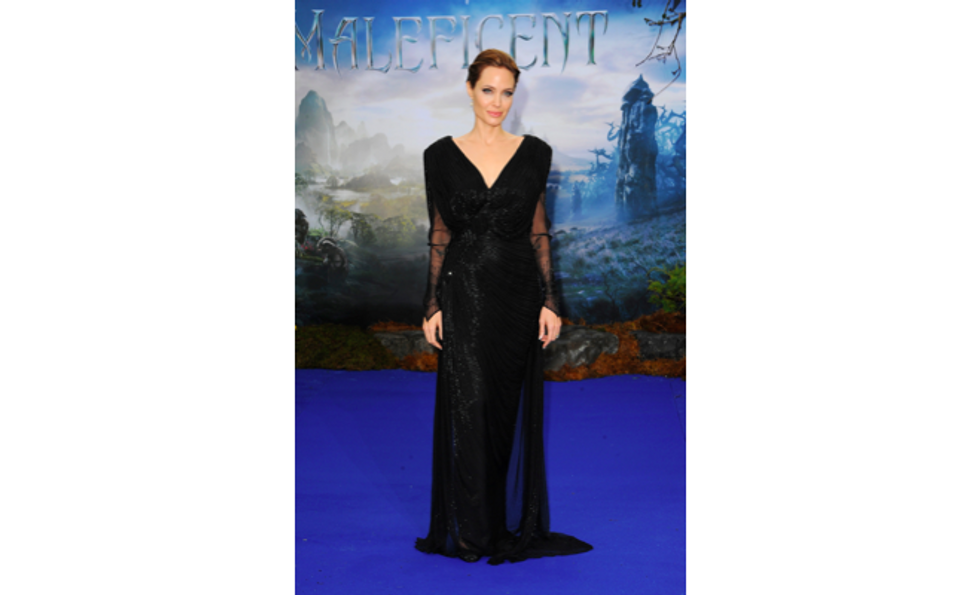 Previous Next
Best: Angelina Jolie is so beautiful that she can wear black on every red carpet and look radiant and stunning and just totally stand out. Here she is at a private reception for Maleficent wearing a beautifully embellished Atelier Versace gown. 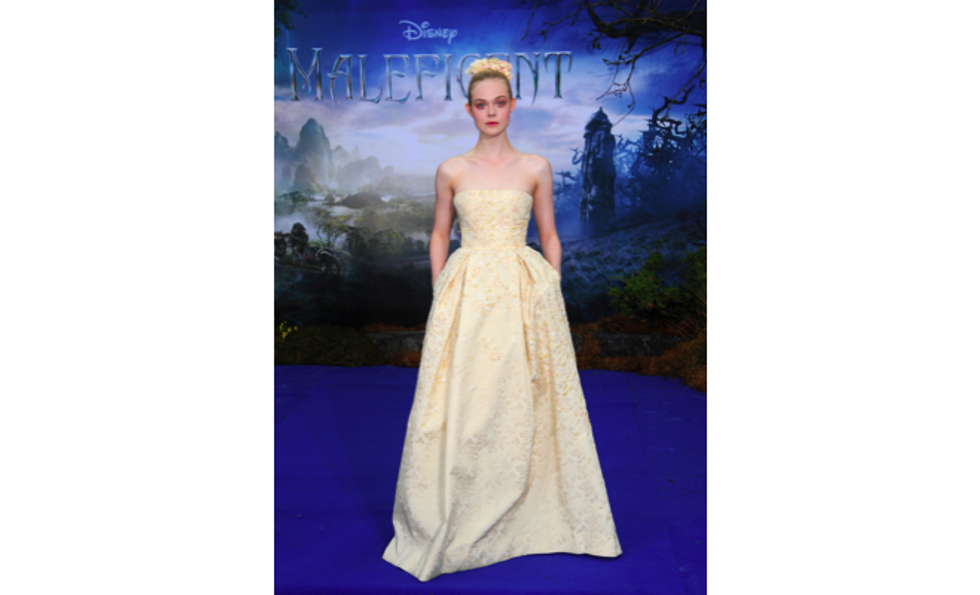 Previous Next
Best: Elle Fanning was there too, and I actually, for once, loved her look. Check out her hair in the picture. 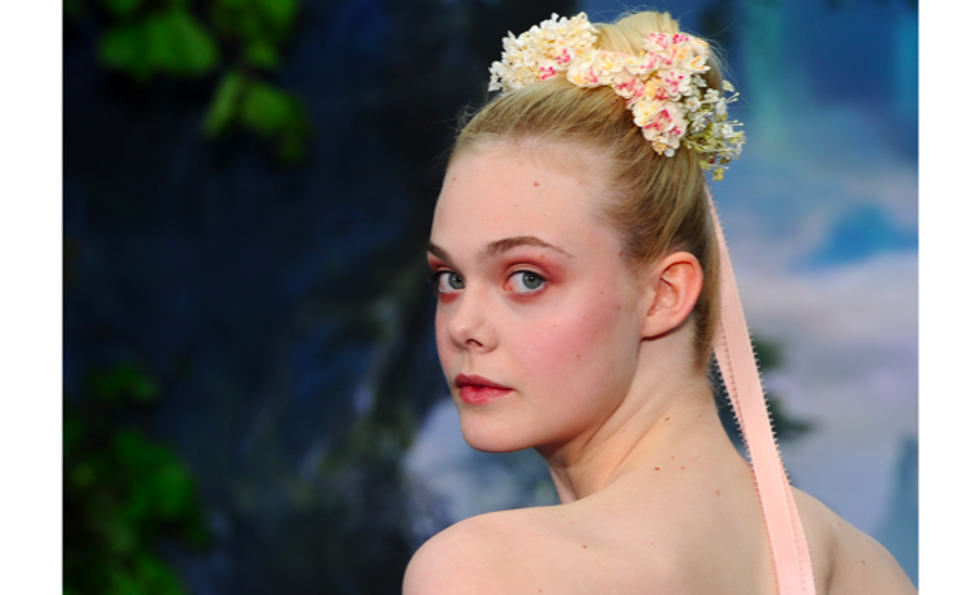 Previous Next
I mean, it’s just so pretty and girly. Her makeup is a little odd, but oh well. 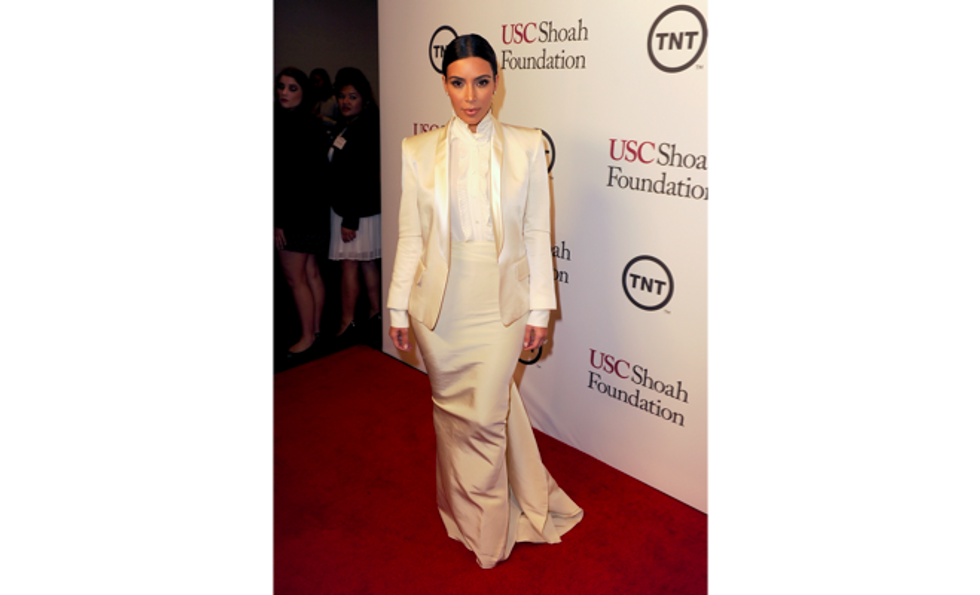 Previous Next
Worst: I mean, really Kim? I guess now that she’s marrying Kanye, Ms. Kardashian thinks of herself as a style icon or some bs, so much so that she could pull off this hideous, cream tuxedo-meets-train skirt sort of ensemble to the USC Shoah Foundation Gala. 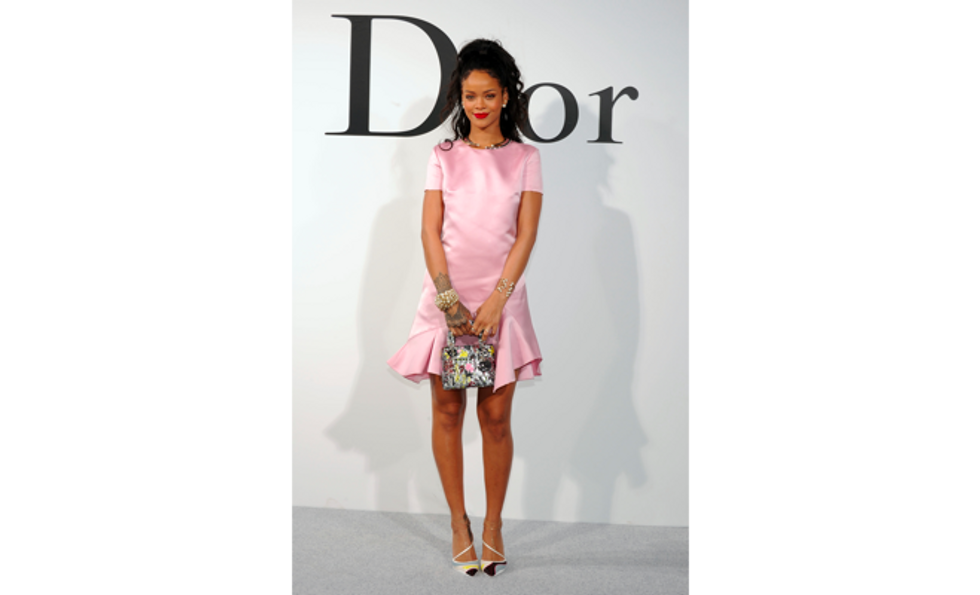 Previous Next
Best: Bad girls can do good! Rihanna looked extremely ladylike and demure at the Christian Dior Cruise 2015 show in NYC. 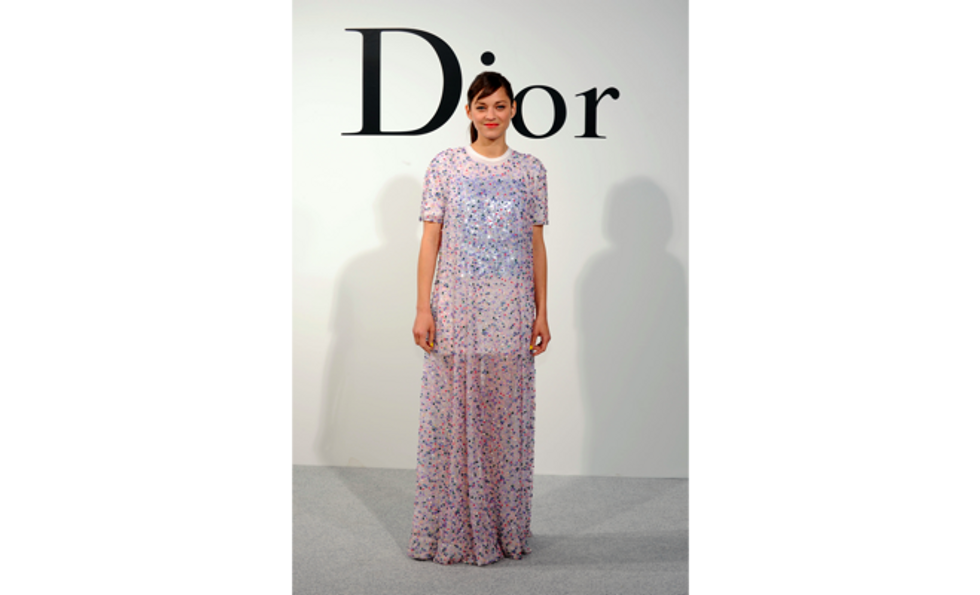 Previous Next
Worst: Unless Marion Cotillard is hiding a pregnancy, she has no business wearing this Dior, smock of a dress.

Mary-Kate Olsen turned down Olivier Sarkozy's proposal when he first asked her to marry him a few months ago.

The pint-sized former child star, 27, apparently wanted to make sure he was "the one" before committing herself. Either that, or she realized she's going to spend the rest of her life with a creepy old French dude who treats her like a furry pet.

"He tried about a year ago, and she wasn't ready," an insider tells Us Weekly. "She didn't need to be wined and dined. She wanted to make sure he would be good to her."

Mary-Kate and Olivier, 44, went public with their romance in 2012 and are apparently thinking about having kids. We would like to recommend she take her time with that one, at least.

"Mary-Kate's family thinks Olivier is the best thing to happen to her," another source gushed. "They love him."

I mean we want to be happy for them both but why does he keep petting her like that when they're in public? She's a grown woman, Sarkozy, not a puppy!

Mary-Kate Olsen is getting married!

The 27-year-old is set to wed her 44-year-old boyfriend, Olivier Sarkozy, according to US Weekly.

The child star-turned-fashion designer has been dating the banker, who is the half brother of former French President, Nicolas Sarkozy, for two years—they live together in a $6.25million townhouse in New York's Lower East Side.

It will be the first marriage for Olsen and the second for Sarkozy—He was previously wed to Charlotte Bernard, with whom he has two kids, Julien, 12, and Margo, 10.

"Mary-Kate has made him a better father. She remembers all the kids' special events," a source told Us. "She thinks he's a great dad.

"Mary-Kate's family thinks Olivier is the best thing to happen to her. They love him."