Colin Broderick's imagination was forged by The Troubles in Northern Ireland and his work as a "chippy" (carpenter) after he landed in New York City.

His dream of becoming a writer may have seemed impossible to him at times, but it never left him. Despite his near fatal attraction to booze and countless personal and artistic concussions, he continued to swing his creative hammer and push past the character he once felt he had to play—the hardcore drinker, the Irish scribe. Those early struggles and triumphs have been recently documented in his first feature movie "Emerald City," an autobiographical account of his shift from a struggling construction worker to published author (it has just been released on VOD). After finding sobriety and refining his talent, he has gone on to build an impressive body of published work.

Most recently, Broderick serves his mission by pulling together and editing The Writing Irish of New York, a collection of essays by and about Irish writers who in essence lay out the entire history of Irish literature in America. The book tells the stories of a community bound together by the thick green tug rope that connects Gotham and Ireland. Writers like National Book Award winner Colum McCann, Poet Laureate Billy Collins, The New York Times Best Seller Luanne Rice, and best-selling author Malachy McCourt give intimate accounts of their own early days trying to make a living doing what they love in a city that will either make or break them. Interspersed with these accounts are snippets penned by Broderick himself; miniature, heartbreaking and inspiring portraits of the legendary Irish authors who have paved the way in America: Brendan Behan, Maeve Brennan, J.P. Dunleavy, and Oscar Wilde, among many others. The pages are filled with tales of the late greats, as well as a newer generation's first hand accounts of the sometimes trying, always rewarding life as an Irish writer—it's hard to imagine a library this collection doesn't belong in.

Author Colum McCann, internationally renowned for such novels as Let The Great World Spin, and This Side of Brightness, writes an exclusive account of his early days as a writer in NYC. For the first time ever, he tells of the struggles, the doubt, and ultimately, the hope. It's a vulnerable and heart-felt account of exile. It's Colum McCann as we've never seen him before. This essay alone is worth the price of this book.

Broderick tells of Oscar Wilde, whose works are so iconic and richly steeped in mystery and drama that it can be easy to forget the madness of his life. He disregarded societal taboo, pushing boundaries and advocating for an honest exploration of homosexuality, both in his written work and his life. At every turn, Wilde was met with disapproval, judgement, and ultimately, punishment—but he reveled in it. It fueled his flamboyant character and led him to New York City, where he finally found the celebrity he so desperately craved. There his ego exploded, and his blatant disregard for others' opinions shifted from triumph to tragic, ultimately leading to his downfall.

Wilde exemplified all things theatrical in his writing, but, in stark contrast, the story told by contemporary New York writer, Kevin Fortuna (though equally powerful) is softer in tone, more humble. A great-grandson of Ireland who reconnects with his maternal bloodline, Fortuna, in his essay, illustrates the simple social magic that is part of normal life in Ireland, the love of language and conversation. Fortuna's story is an unusual one that involves the intersection of business and art, and can be traced back to his first trip to see family in Cobh, County Cork. This time spent in Cobh ignited a passion for the written word, a hunger for truth—and a driving need to avoid a "boring," wasted life. He ends his story by taking you back to that formative first trip to Ireland. The haunting conclusion to his essay captures the dark days of Ireland's past, but also the light that shone through, forged from sheer will and talent. 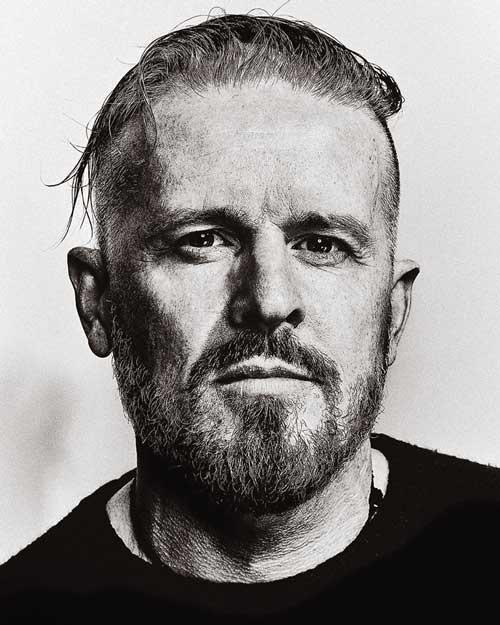 Those brighter days illuminated the life of America's prince, John F. Kennedy Jr., who was born into more fame and fortune than most of his fellow Irish writers would know in a lifetime. He married his father's integrity and love of country with the ever-growing, sexy world of pop culture to form George, a little-known NYC-based magazine that blurred the lines between politics and celebrity. Kennedy and his team asked the tough questions, and though he never shied away from the cloud of controversy surrounding his family, he would never rely on it. George's voice was objectively critical of leaders regardless of party politics, yet Kennedy still managed to lace his criticisms with undertones of his late father's idealism. He lead a blessed life that ended in tragedy, his potential never fully reached.

Dreams touched upon, but never fully realised, is a common Irish refrain, like the fleeting life of Frank O'Hara. O'Hara spent his wild days scribbling poetry on the back of napkins in NYC, and his life story is as crazy as his genius. Born to strict Catholic parents, O'Hara was destined to break from these religious restraints from an early age. He served in the U.S. Navy for two years, where his unconventional mind must have struggled with the relentless routine. His service was rewarded with his education at Harvard, where he published his first body of work and met a fellow poet with whom he fell madly in love. The two moved to New York, and like so many of his Irish brothers and sisters, what followed was a life riddled with addiction, self-loathing, and relentless pursuit of recognition. New York City is where O'Hara penned his best poetry—the uneasy flow of Manhattan seemed to mirror his own chaotic mind.

Those NYC streets were a hazard and a haven to Dublin-born Maeve Brennan. Like her fellow Irish icons, Brennan's life was a combination of brilliance and insanity, the ratio of which was constantly bouncing back and forth, fighting and complimenting each other at different stages of her fascinating life. A child of revolutionary 1916 Ireland, her father founded The Irish Press and moved the family stateside where she found her voice, and began penning short stories for The New Yorker. Although not feeling confident enough to return to a religiously and socially-repressed Ireland until her later years, Brennan never forgot her roots; many of her short stories were based in her beloved hometown. As the years went on, her perfectly put-together ensembles began to slowly fall apart. Her genius stayed intact while perhaps a little lost at times. Like many talented and tortured artists, she left the Earth relatively unknown in the land of her birth, where her heart remained in the land that seemed to have forgotten her.

Lives bound together in talent and struggle, steeped in whiskey and self-doubt, the authors in The Writing Irish of New York span three centuries, but ultimately their heritage unites them. Far greater than the written words is the unspoken feeling you get when reading this book, the power of heritage spanning generations and oceans. Broderick closes the book with his own short story, his life fitting seamlessly with those of his much-loved idols, securing him a well-earned seat at the table.

It's easy to get caught up in the legend and deep sea of beautifully written words, but what makes Broderick's book worth reading is the way he mythologizes these writers when discussing their work but humanizes them in his portrayal of their character. It's the non-chronological narrating of these stories that captivates you. The vacillation between the biographical snippets of literary giants and the stories of newer writers serves as a gentle reminder of the hard path that came before and the history that unites them all.