What We Can Learn From Emily Ratajkowski's New Essay

Mass Hysterectomies at Immigrant Detention Center? Here Are the Facts.

Revolution Roundup: 9 Ways to Help the World This Week

This Haunts Me: The “My FBI Agent” Meme as Metaphor for Surveillance Capitalism, American Loneliness, and God

Is the "my FBI agent" meme a metaphor for surveillance capitalism, for oppressive government forces, for loneliness in the digital age, or for God in a godless world?

If you missed the trend, "my FBI agent" is an Internet meme that originated around 2017.

The idea is simple: Every time you do something weird online, your personal government-appointed surveillance agent is watching and reacting.

"[T]he fbi agent monitoring my computer while i start watching another 24 minute vine compilation on youtube," reads one tweet, accompanied by a gif of a woman reacting with horror.

Sometimes the FBI agent is more of a friend-type figure, a sensitive and reactive companion. Sometimes they're more of a caretaker.

But most of the time, these hypothetical agents are watching over us, even contacting us in times of need. 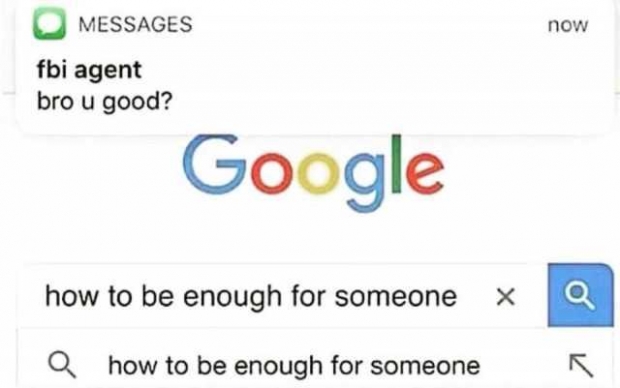 Sometimes, the FBI agent seems to symbolize the oppressive surveillance capitalist state. But more often than not, in these memes, the FBI agent is a kind of parental or guiding figure, a buffer against the lonely isolation of the Internet void.

the fbi agent monitoring my computer while i start watching another 24 minute vine compilation on youtube https://t.co/Hh02Rz2j7o
— madison (@madison)1513819512.0

If memes are the hidden, silent language of the digital generation's subconscious, then certainly the FBI agent has its own symbolic significance. But what exactly is that meaning?

FBI Agent as Our Subconscious Awareness of Surveillance Capitalism

In the era of surveillance capitalism and data harvesting, it is quite possible that our lives are being surveilled closely, and at the very least we all know that nothing we do on the Internet is ever really private.

Data harvesting is a potential advertising juggernaut. As AI improves its abilities, it'll be able to learn more and more about us, therefore tailoring its advertisements to our interests, making us more likely to buy products and feed its capitalist machine.

"Surveillance Capitalism is the manifestation of George Orwell's prophesied Memory Hole combined with the constant surveillance, storage and analysis of our thoughts and actions, with such minute precision, and artificial intelligence algorithmic analysis, that our future thoughts and actions can be predicted, and manipulated, for the concentration of power and wealth of the very few," reads Surveillancecapitalism.com, a website dedicated to fighting surveillance capitalism and breaking the cycle of distraction and data harvesting that allows it to continue.

HAHA I LOVE TALKING TO THE FBI MAN IN MY COMPUTER AND SAYING CLASSIC THINGS LIKE STOP WATCHING ME YOU FASCIST PIG
— NOT A WOLF (@NOT A WOLF)1517473011.0

As John Naughton writes in The Guardian, "The combination of state surveillance and its capitalist counterpart means that digital technology is separating the citizens in all societies into two groups: the watchers (invisible, unknown and unaccountable) and the watched... But whereas most democratic societies have at least some degree of oversight of state surveillance, we currently have almost no regulatory oversight of its privatised counterpart."

In essence, every time you use the Internet, your data is either being harvested or you are harvesting data.

Even if we're not acutely aware of this, most of us have some idea that we're being watched online.

Enter: The FBI Agent, the manifestation of whatever creepy force is observing us, tracking our every move, leeching off our data and hoarding it in ever-more intelligent databases.

Beyond data harvesting, there's plenty of other ways we might be being watched and tracked online. We all know that Zoom calls aren't private and that hackers could unearth our search history at any time, and anyone who's pinned a sticky note on their webcam understands the eerie feeling that we might not be alone in these digital cosmos.

Enter the FBI agent, the embodiment of deeply ingrained political and economic power structures that we can't see yet still sense under the surface of our ordinary digital lives.

We all have some level of lingering awareness that our lives are being dictated and observed by forces far beyond our control. We all know the powers that be (namely the cops and the government) are horribly corrupt and dictated by corporate interests.

And most Americans have wondered if the government may be watching, ready to take down revolutionary sentiments, filling our feeds with false information, and dividing us at the very moment when we need to come together.

FBI Agent as a Friend, Parent, or Lover in a Lonely World

Despite their negative connotations, FBI agents are often viewed as friends, as gently parental figures, or even as unwitting outlets for bad efforts at flirting.

Perhaps the reason for this is simple: There's no secret that loneliness is an epidemic in America. Around 2017 or 2018, when FBI agent memes were first originating, some studies began proposing that "loneliness in America is at an all-time high," arguing that "long working hours and sad desk lunches may be to blame." Capitalism is at the root of America's "loneliness epidemic." 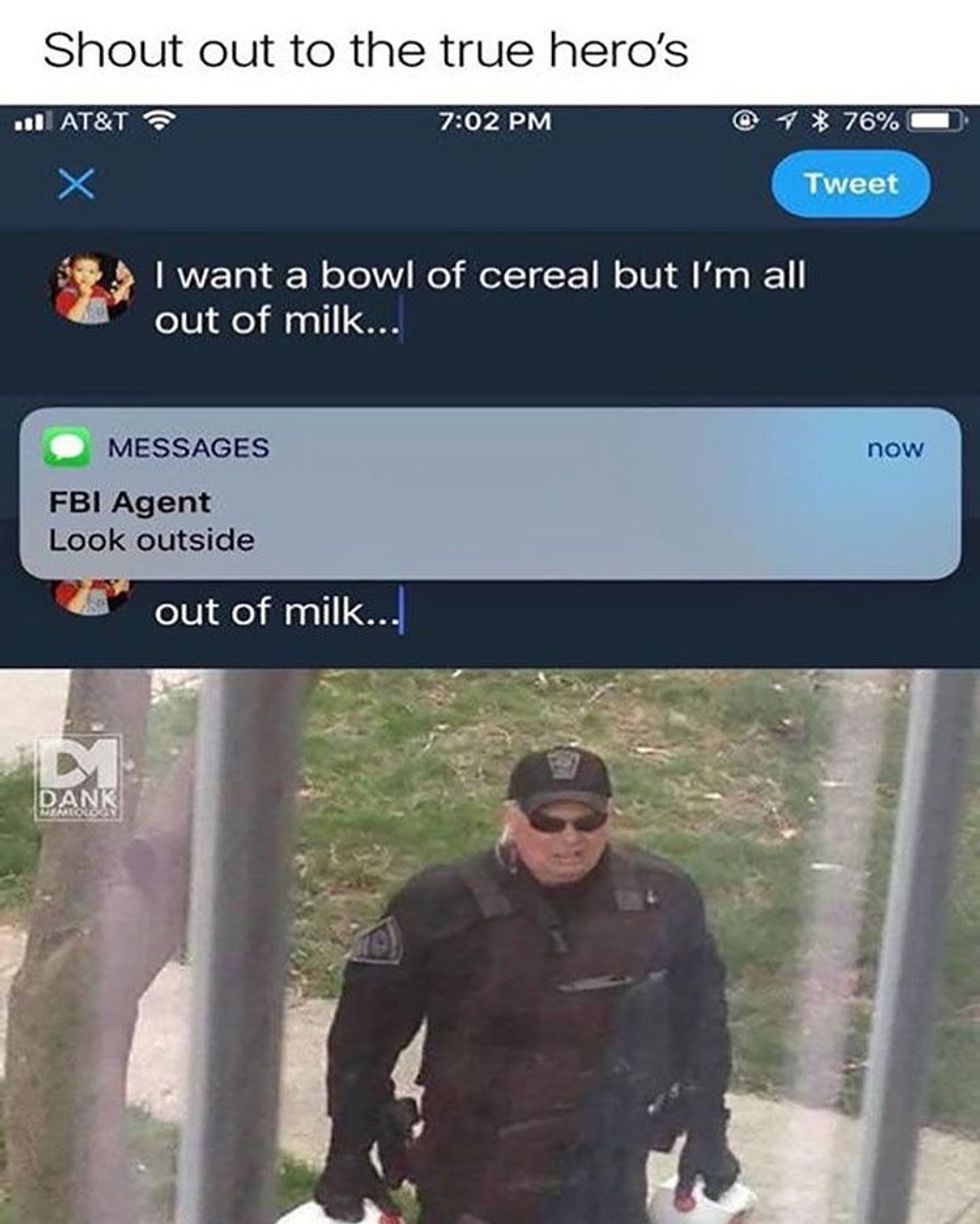 In 2018, a UCLA survey found that "More than half of survey respondents — 54 percent — said they always or sometimes feel that no one knows them well. Fifty-six percent reported they sometimes or always felt like the people around them 'are not necessarily with them.' And 2 in 5 felt like "they lack companionship," that their "relationships aren't meaningful" and that they "are isolated from others."

Sometimes before I leave the house I wave to my laptop camera just to brighten the day of the FBI agent. Friendline… https://t.co/RmnH3ecfIV
— Cole M. Sprouse (@Cole M. Sprouse)1517001829.0

Of course, COVID-19 made things worse in its own way, forcing many to confront the state of their own lives and the world.

The Internet has been called a cure and a cause of loneliness many times, and there's no clear consensus on what spending all day and night online as opposed to with others might do to the psyche.

Enter the FBI agent. In a world where many of us have no long-term relationships, no job security, and no clear-cut community, our assigned FBI agent is always there, watching, providing feedback, and working as a real human vessel that has to stay with us no matter what.

Me after realizing the fbi man watching through my webcam has seen me without hijab and now he has to marry me https://t.co/SFwYoy3MX7
— farha (@farha)1516995065.0

FBI Agent as God in a Godless World

Another explanation for the FBI agent meme could be the fact that Americans, especially the youth among us, are now largely godless. Disillusionment with mainstream religion has pervaded America, and whether we are really at the "end of religion" or just seeing a low period before a new version of extremism overtakes us, certainly many of us don't have a clear-cut image of God to pray to even if we'd like to.

Without gods or places of worship, many of us are turning to social media for our sermons, attending to our favorite websites and podcasts the way our forebears attended church. Perhaps the FBI agent is our new god, filling the spiritual void that we're all vaguely aware of.

It's easy to view the parallels between the traditional monotheistic God and an FBI agent like Hotch from Criminal Minds, after all. Stern, paternal, all-knowing and prepared to combat forces of evil, prone to fits of measured rage and dedicated to a set of somewhat arbitrary morals and codes, our God/FBI agent is watching over us and judging us whether we like it or not.

He knows everything we do, this God/FBI agent—where and when we sleep, what websites we visit, what bizarre search queries we enter, who we truly are.

Maybe we all know there's really something else out there, or maybe we just love projecting human faces onto infinite endlessness, but if there is any form of consciousness on the other side of the Internet, our FBI agent—omnipotent, disconcerting cop-adjacent, full of wrath and judgment and forced to listen to us—might just be the closest thing any of us children of the digital age will find to God. (Perhaps that's a blessing in itself; God, the government, and the police have been used to maintain oppressive structures for far too long, and it's about time we break free).

And for any God or government-employed surveillance agent that's been forced to watch us dancing along during Zoom workouts this quarantine: Forgive us, FBI agent, for we have truly, truly sinned.

Indie Roundup: Our 5 Favorite New Indie Albums of the Week

Here's what to listen to this weekend.

We're here to make your music discovery a little bit easier. Popdust's weekly Indie Roundup finds the five best albums coming out each week so that you don't have to. Every Friday, we'll tell you what's worth listening to that might not already be on your radar.

He could do so much better.

Earlier this year, the Canadian pop star released Changes, a shallow collection of sex-tinged R&B songs that served as the singer's first album in five years. The album was explicitly dedicated to his wife, Hailey Bieber, which was perhaps the only interesting thing about it since the duo's tumultuous relationship was already established as an inescapable part of pop culture.

The Biebers' 2019 Vogue cover story illuminated what the publication called an "All-In" romance; it was filled with bizarre anecdotes, including that the couple married quickly to break their year-long celibacy. Bieber–an openly devout Christian whose close ties to the controversial Hillsong United Church have remained problematic throughout his career–had seemingly reentered the public eye as a changed married man of God who sang exclusively about making love to his wife.