We're not saying Chrissy Teigen bullies John Legend... But if she does, he probably likes it.

John Legend has received a distinction no man has ever earned.

Sure, he's achieved a full EGOT (Emmy, Grammy, Oscar, and Tony), he stars in an Emmy Award-winning TV show, and he's only the fourth person of color to be named People's "Sexiest Man Alive," but his most impressive credential by far is having Chrissy Teigen as his wife.

Legend is arguably a trailblazer in this new avenue; as a baby-faced 40-year-old, his new "sexy" honor tips the balance in the eternal battle between being "cute" or "hot" but never a hybrid of both. Legend commented right away on the vacuous nature of the "Sexiest Man" title, "Everyone's going to be picking me apart to see if I'm sexy enough to hold this title," he told People. I'm [also] following Idris Elba, which is not fair and is not nice to me!"

No, it's not nice. But with Chrissy Teigen as his wife, Legend knows better than to expect niceties; because it's clear that no one, absolutely no one, is better at dragging John Legend than his wife.

John Legend: The Icon, the Meme, the Aardvark

The Internet's love of the "John Legend looks like Arthur" meme doesn't compare to Chrissy Teigen's. She's returned the public's attention to it when it simply wasn't being appreciated enough, especially in reference to their daughter. Once upon a time, it seems Legend could appreciate the joke, even dressing up as the children's cartoon for a commercial once. But marriage is long and arduous, and not even eternal vows can't prepare you for having the Queen of Twitter as a spouse. Really, John Legend's exasperation in his wife's Instagram comments is the delicious coda to every little dig.

Shortly after being crowned the most symmetrical face in mainstream media, Legend guest-hosted the Ellen DeGeneres Show. Inevitably, during one of the interludes, Chrissy Teigen popped out of the fake piece of furniture that's always lying around Ellen's set so nearly every celebrity guest can be caught on camera having a moment of pure, animalistic fear. This is John Legend's fear face:

Even scared, he looks so carefree. How? I don't trust it.

After bantering about the uncomfortable logistics of sitting in a box so you can yell "boo" at your husband, whom you probably live with and could do a better job of scaring the next time he's emerging from the shower, Teigen seemed to believe that her husband genuinely had no idea she was in the studio. Teigen asked him, "You didn't hear me banging around the box?" "No, I did not," Legend answered. Teigen lamented to the audience, "This helps because he's very unaware of anything around him. Like we get in fights on the airplane and stuff. He'll hit people with his bag. And I'm like apologize!"

What makes that Ellen scare even better is that Chrissy Teigen seems to alternate between flippantly sharing intimate details about her and John's love life and also not knowing pretty basic, very public information about her own husband. Why? Because she's busy. No, she never saw Selma, despite her husband taking home his first Oscar for writing the moving score. Why? Because she didn't feel like it, mind your business!

In order to clearly communicate his deep feelings of inferiority compared to Idris Elba, John Legend took to Twitter to compare a picture of himself at 17 to the aesthetic pleasure that is the one and only Idrissa Akuna Elba, OBE. To her credit, Teigen wrote an encouraging response that magnanimously pointed to the fact that we all have old photos of ourselves in which we look like a half-transformed Animorph beast...except Idris Elba. "Yeah but let's see an @idriselba pic from 1995 (prob still very hot)," she wrote.

And indeed, Elba accepted her challenge and posted a photo of himself as a smoking hot twenty-something year old in 1995, which at a certain point is honestly tantamount to an attack on society, because who needs to look like this?

Yes, Chrissy Teigen tried, but must you, Idris Elba?! One day I'm going to start a movement to dismantle beauty biases in Hollywood and all of American culture just so I can shame people for being so hot. Oh, what? That's already a toxic take that's historically targeted women who vote and write and have senses of humor while daring to look better than an unwashed bridge troll? Much like former Sports Illustrated model-turned-author-turned-beloved-TV-personality Chrissy Teigen? who has the honor of being the target of Trump's Twitter rampages??? Nevermind, then. Clearly, Chrissy Teigen bullies John Legend, the "Sexiest Man Alive" in 2019, as an ironic commentary on beauty biases and shame that pervades American media. I get it now.

Is Amal Clooney A Monster Or Just A Wife From Hell?

After being called a jealous monster and a Wife-From-Hell by the National Enquirer, Amal Clooney has taken a sabbatical from photo ops, and who can blame her?

There she was, minding her own business, sort of, waltzing around in new designer outfits wherever there was a camera, when suddenly she seems to have stopped leaving the house.

Could the headlines have hurt Amal's feelings or has she gone back to hell?

Let's try to separate fact from fiction, no easy task when you're dealing with tabloids.

Jealous Monster: So far, no evidence. We've read that Amal hates Cindy Crawford but that seems unlikely. Does she hate George's BFF, Randee Gerber? If so, it hasn't stopped the two men from going on their very special motorcycle trips together. So let's dismiss this charge as fiction.

Control Freak: Doubtful. If Amal were a control freak, she wouldn't let George look like such a slob when they dine out together, and she wouldn't let her trampy sister get in on the paparazzi photos. Let's give her a pass on this one too.

Outrageous Diva Demands: Guilty, your honor! Just look back on all those designer outfits, the tab for which must be astronomical. Not to mention all that frantic mugging for the cameras every time she appears in public. Let's throw the book at her for this one.

Violent Tantrums: If only, right? But there is no corroborating evidence of this behavior, even from her colleagues or former schoolmates. At best, she seems to sulk when things don't go her way, especially in court hearings and in the back of George's limo. Again, let's rule innocent.

Now we are left with the 'Wife From Hell' charge.

You know, what wife isn't from hell if you're George Clooney?

The man swore that marriage wasn't for him and he seemed to mean it. Every year or two, he found a cocktail waitress or model and then traded her in for another one.

He had all the time in the world to hang out with Randee and give his opinion on Darfur. He made his movies and seemed poised to become a satisfied lifelong bachelor, maybe even a future candidate for some political office.

Now, he's in the hole for about a zillion dollars and can never succeed in politics given his wife's family connections. Anyone who expects a baby from Mr. and Mrs. Clooney is probably hoping to meet the Easter Bunny this spring.

However, to be fair, there are probably worse wives to have (hi, Angelina Jolie!)

I'm going to take a risk and put my money on Wife From Hell, or purgatory if you want to be generous. 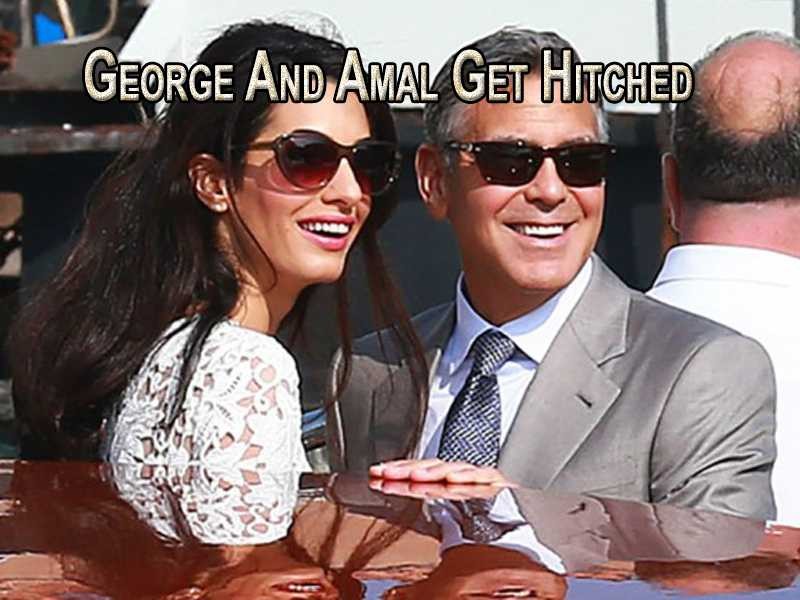 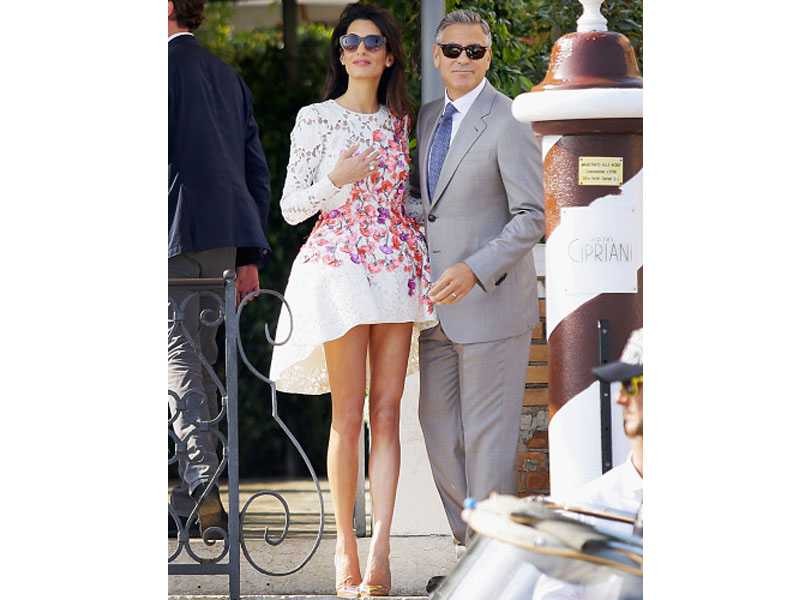 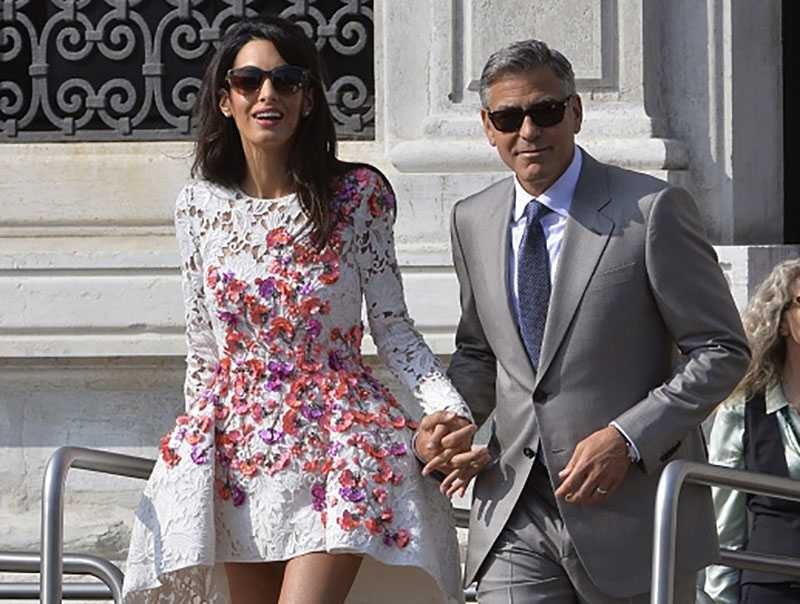 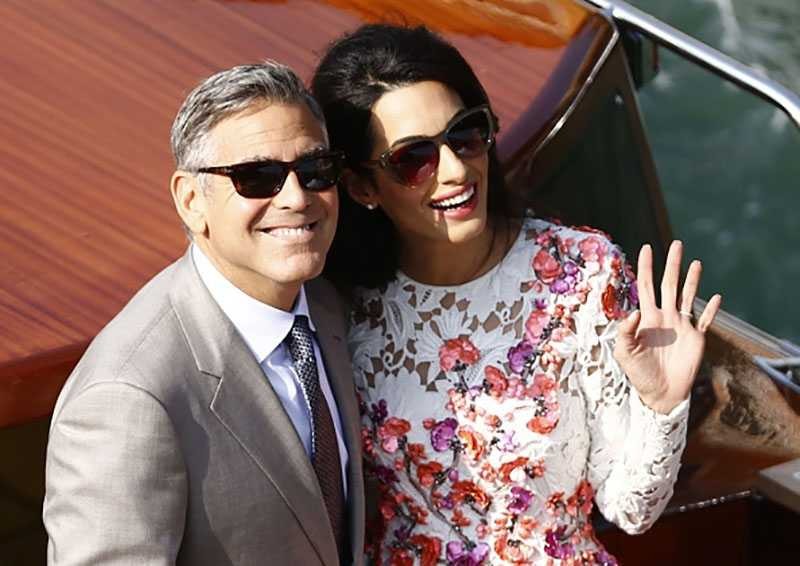 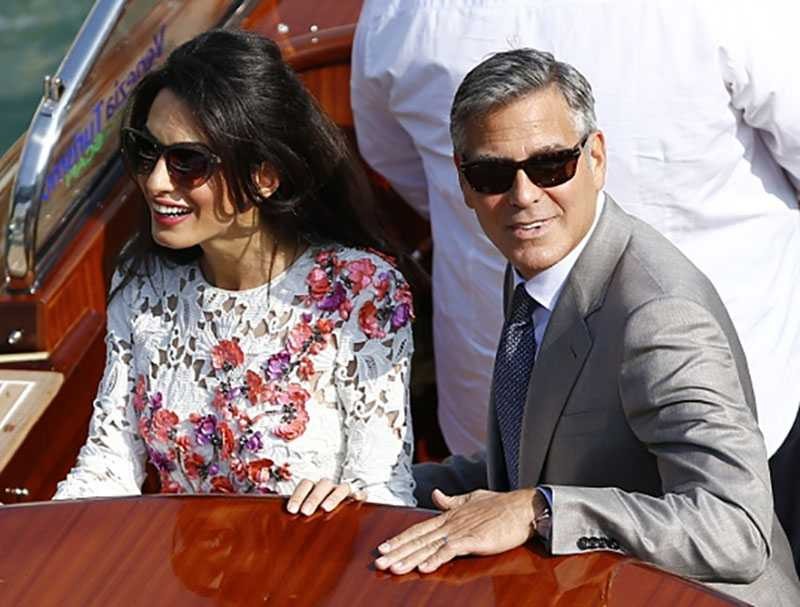 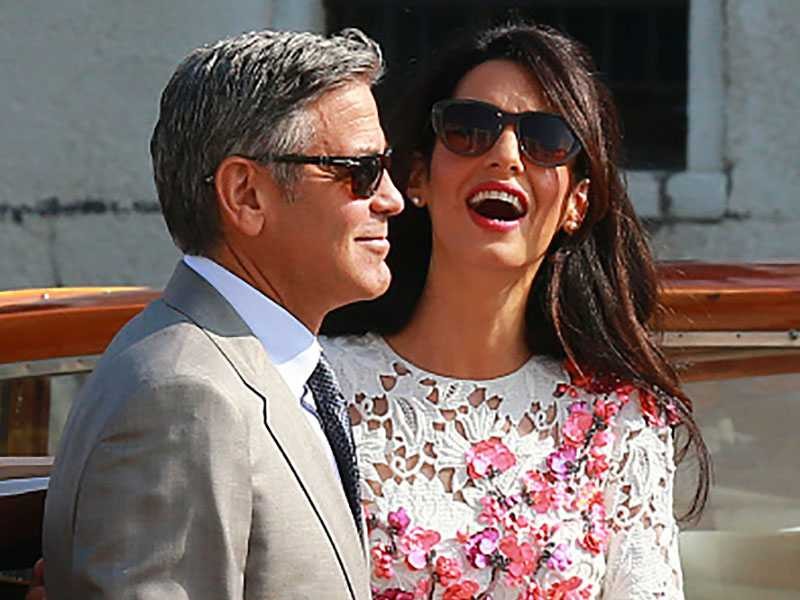 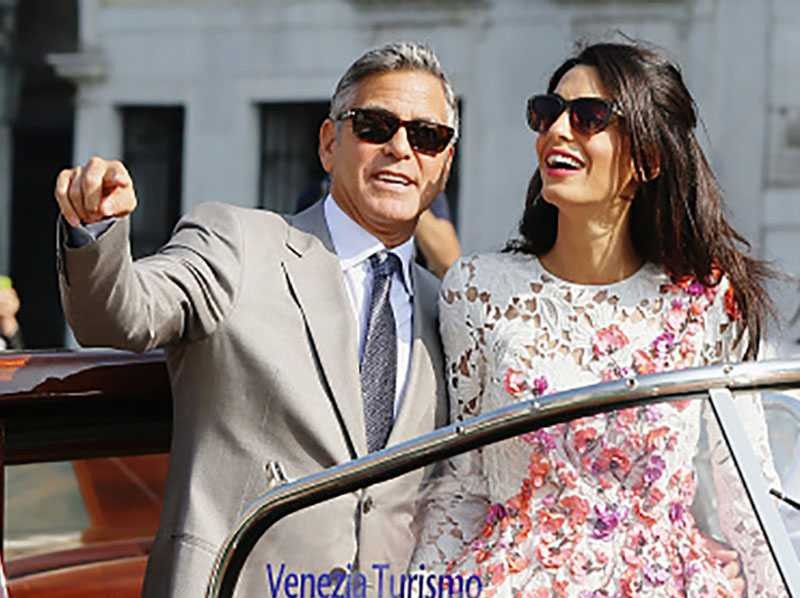 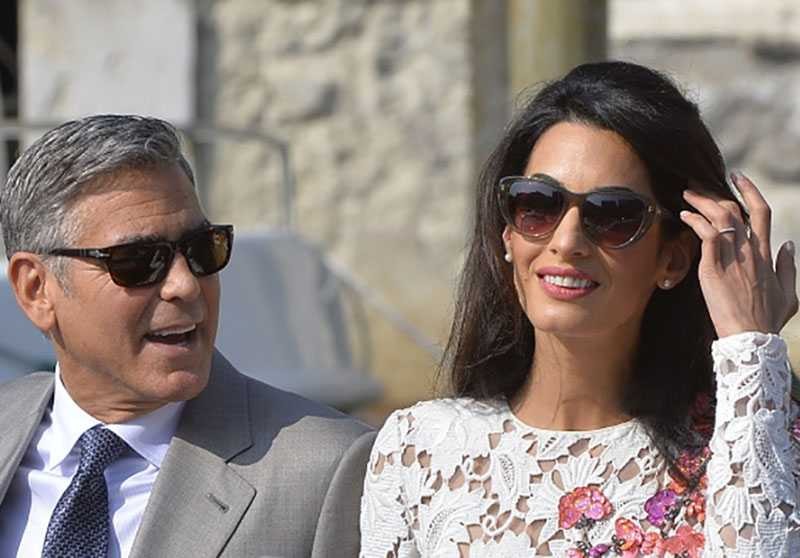 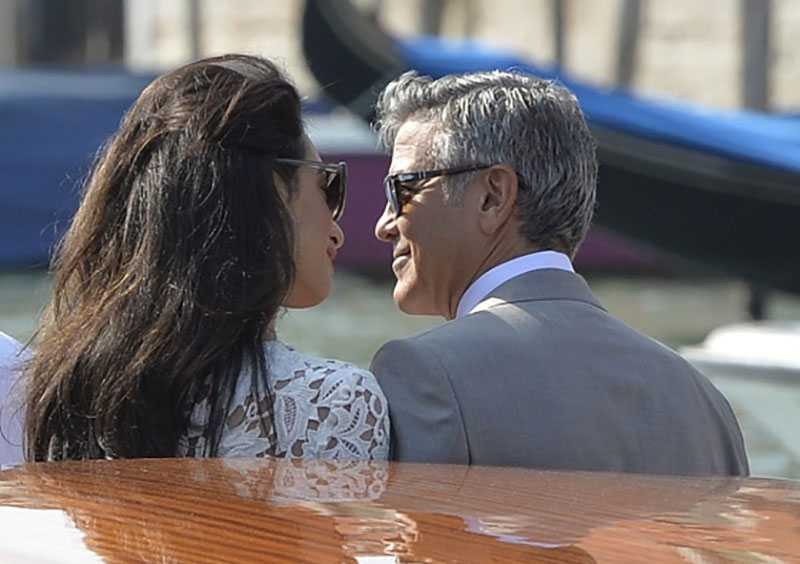 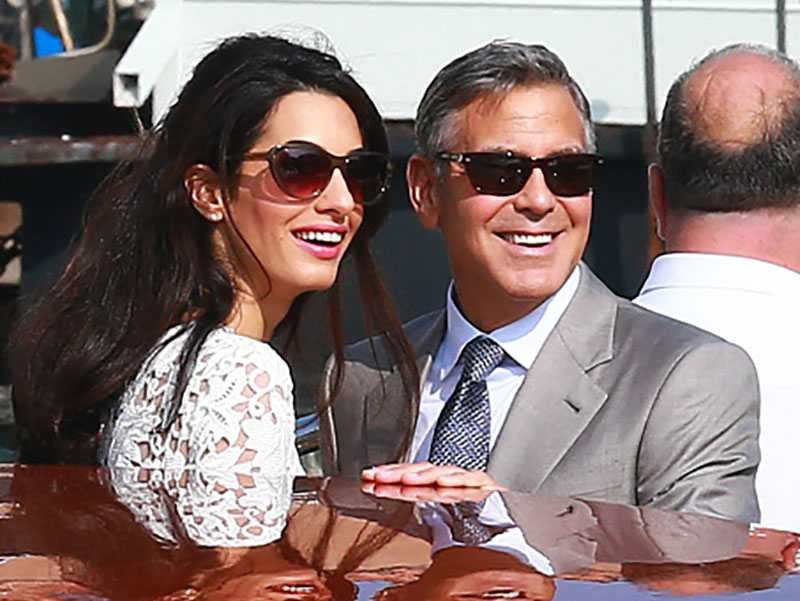 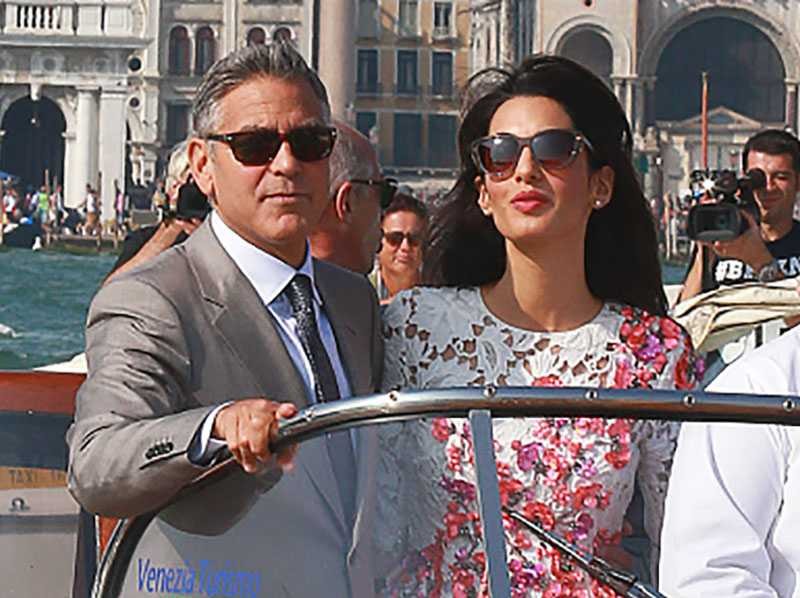 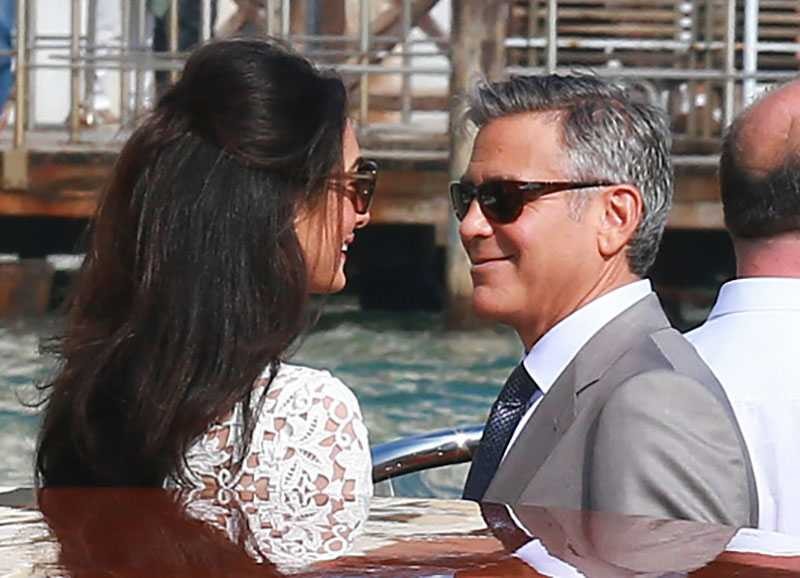 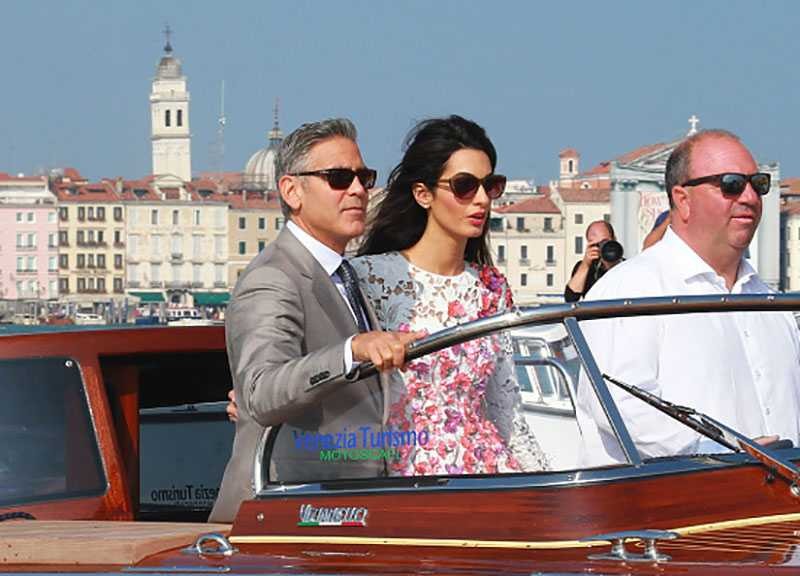 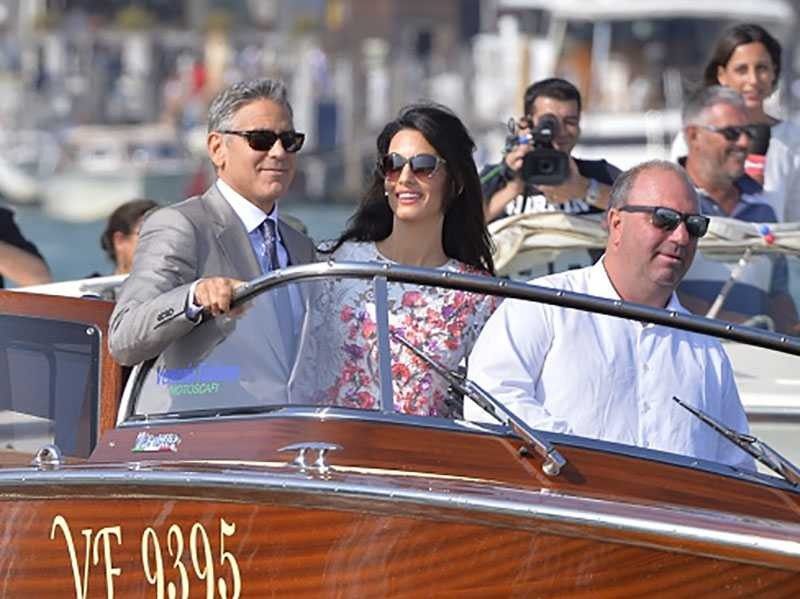 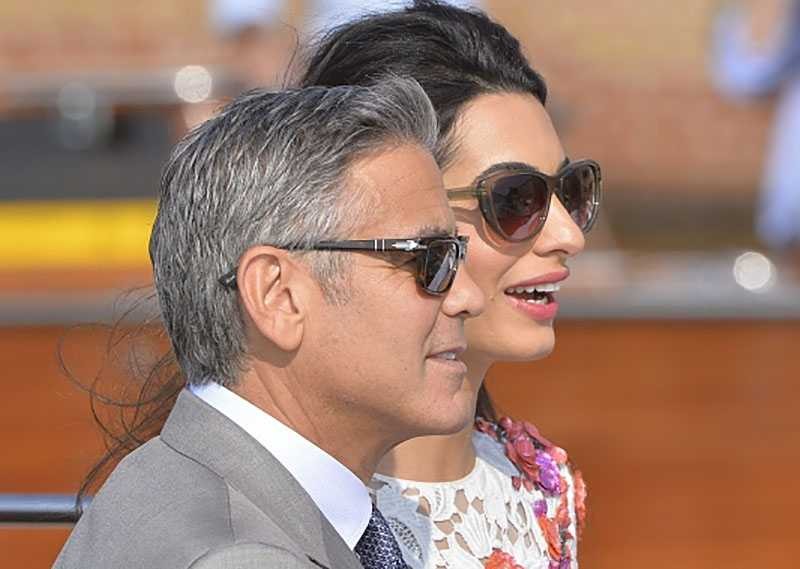 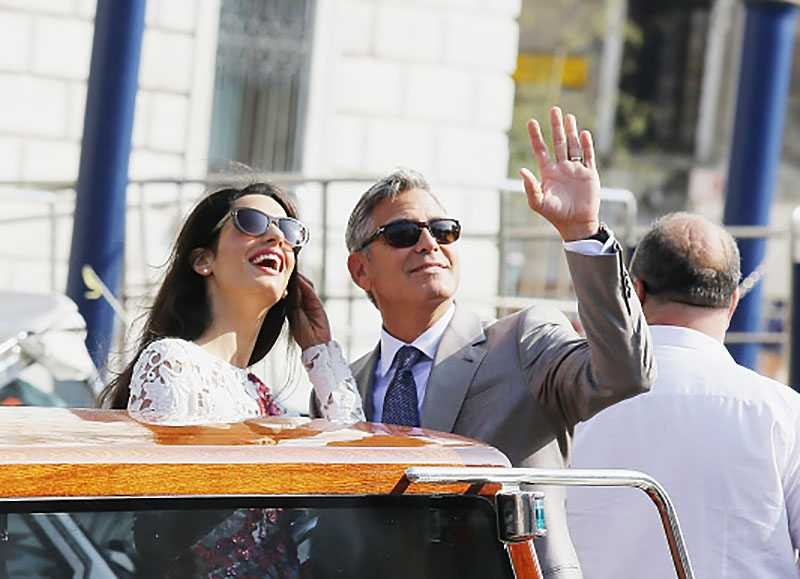 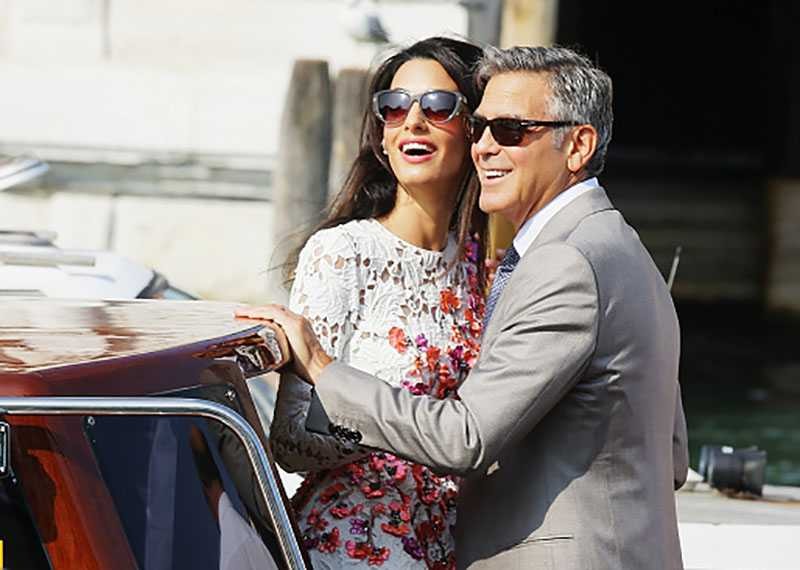 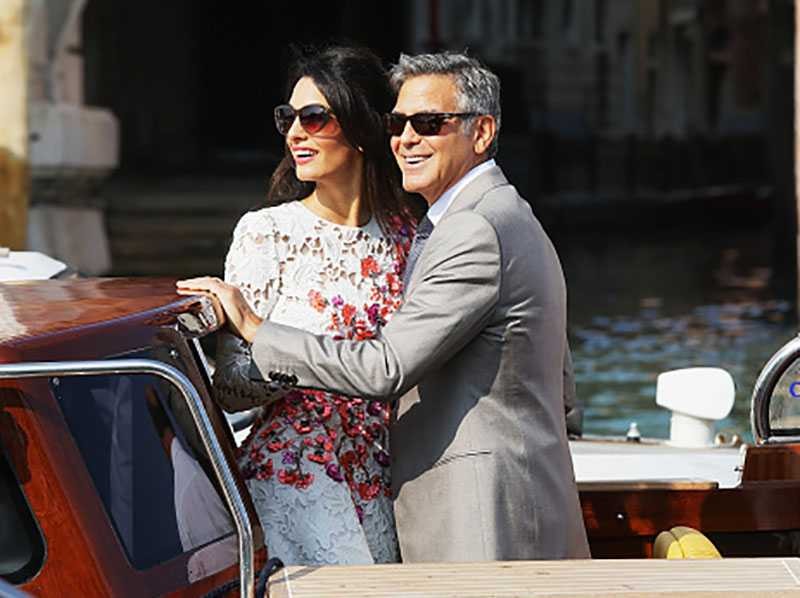 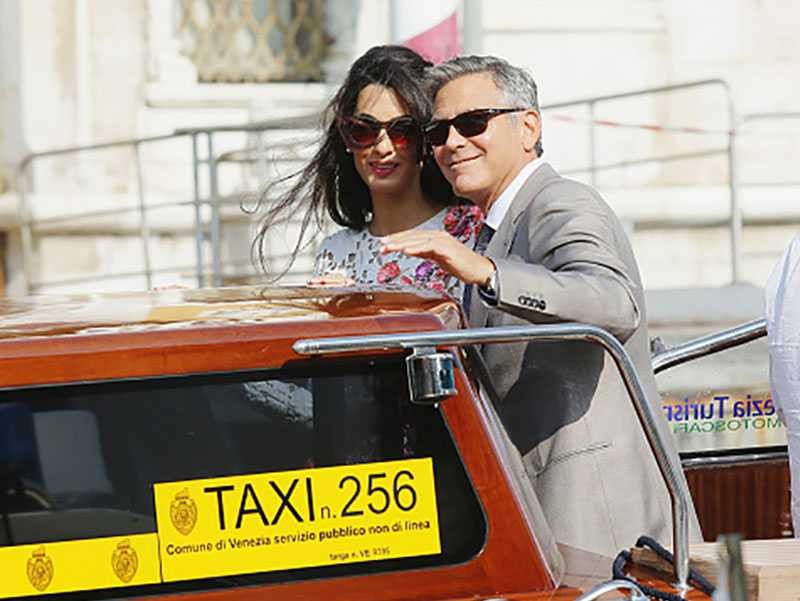 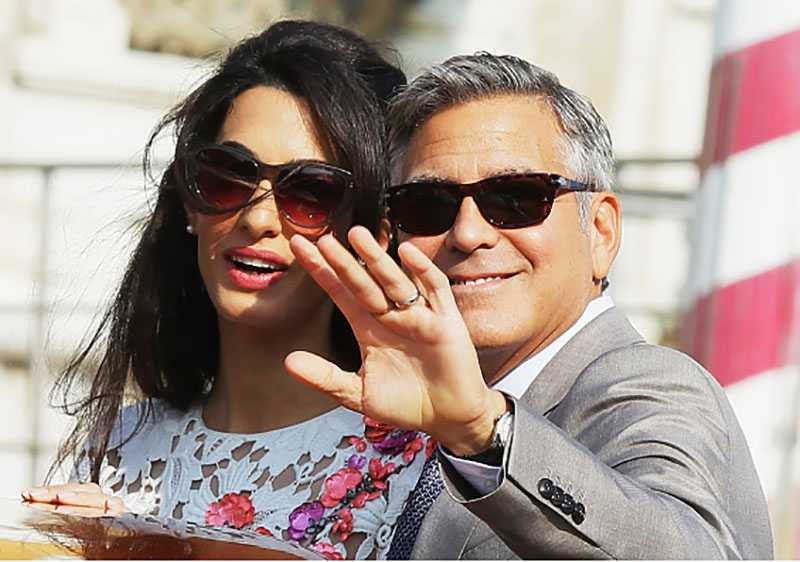 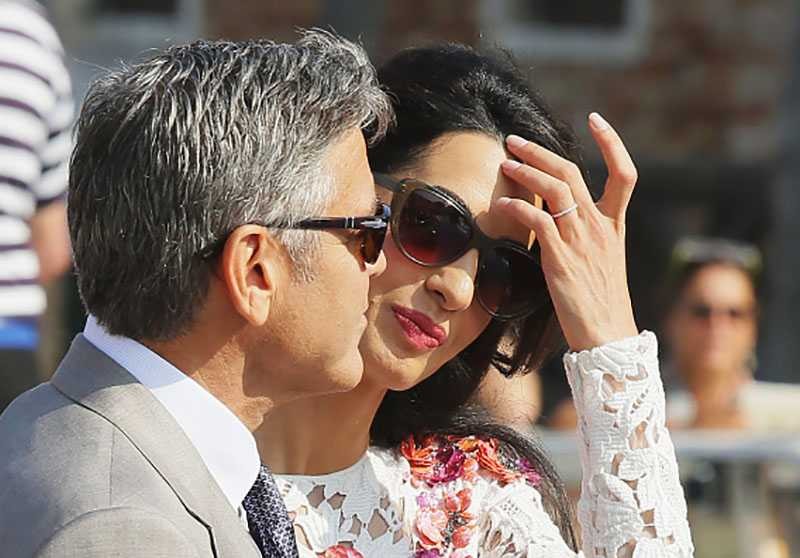 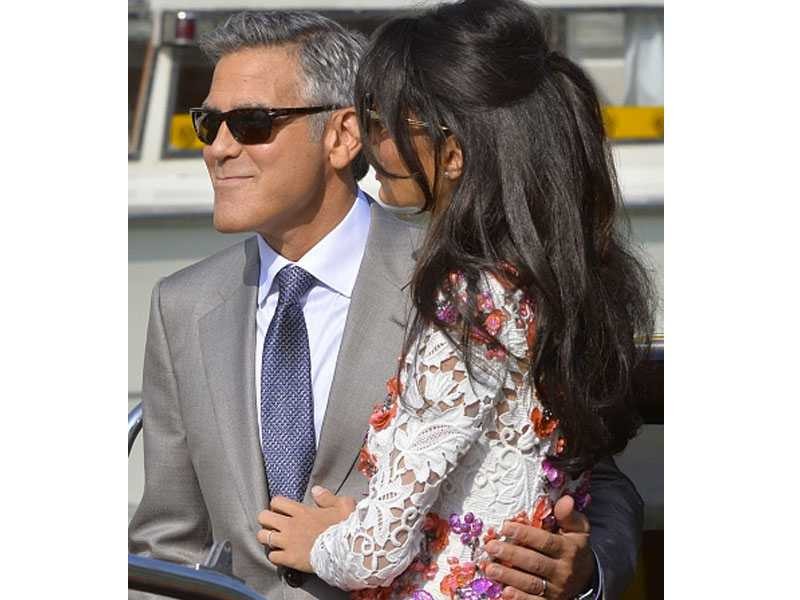 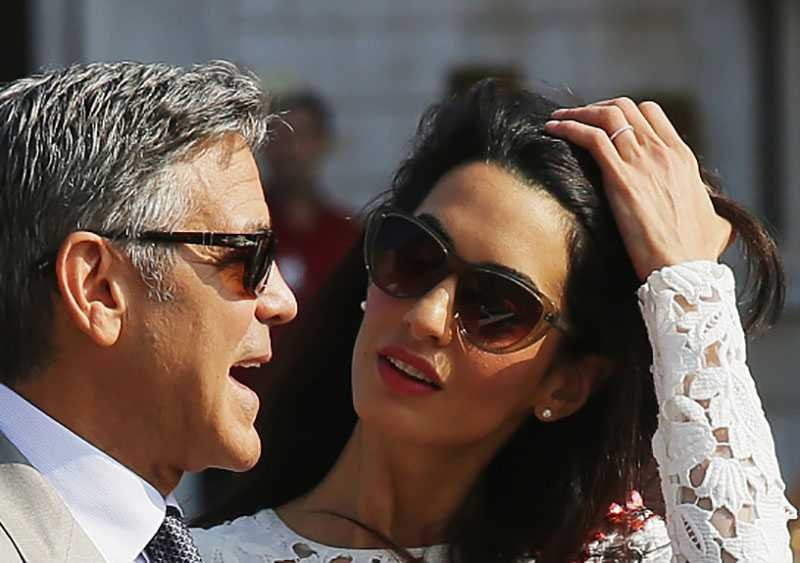 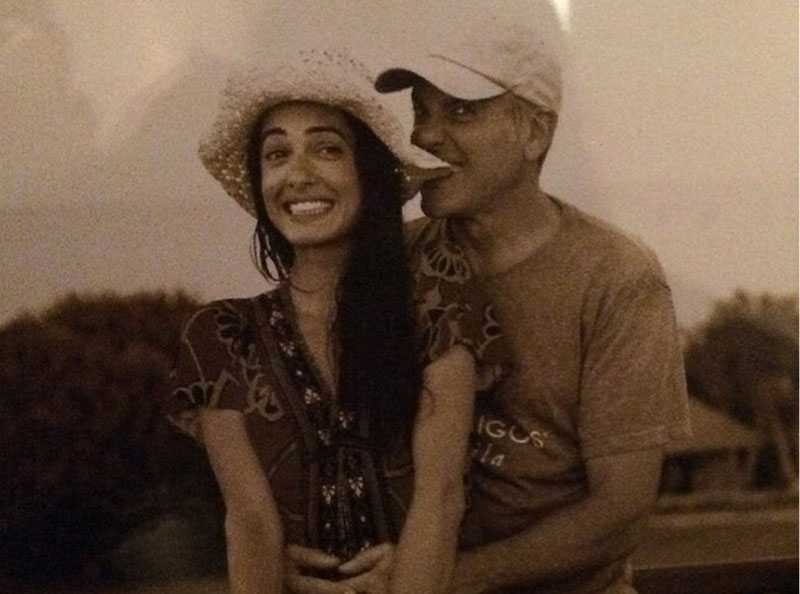 Do you believe those reports that Amal Clooney is pregnant? Then you’ll believe we came across Amal’s secret diary, and here’s the most recent entry:

Shit! We just lost another case and couldn't get Egypt to release those two journalists, whatshisname and whatshisname. On the other hand, did you see the press conference after the verdict? I looked magnificent. My white pantsuit was meant to signify purity, if it please the court. I was like a white knight or an avenging angel or something. All eyes on me, beyond a reasonable doubt.

The magazines are still going nuts for my gold dress but it turns out that you could see my underpants in certain lights. Thank goodness I didn't go commando! George prefers me in boxer shorts but our contract stipulates that I can wear a thong for special events. As I tell my clients, get it in writing!

Speaking of court, Cindy wants me to take up tennis but I don't see the point of running around after balls unless it burns more calories than my treadmill. I think she gets lonely when George and Randee are away on business or off on their motorbikes. I prefer to use the time for a threading appointment or reading about myself online.

Meanwhile, my stylist can't seem to understand how quickly I go through outfits! I will not repeat an outfit. This is why I'm a fucking icon.

If she can't reach Stella by tonight, that bitch is recused.