Repellent 'controversial' photographer Terry Richardson has confirmed that he is expecting twins with his girlfriend Alexandra Bolotow, who was once his intern and then assistant.

Richardson announced the pregnancy on Instagram, revealing that he and Bolotow, 32, had been struggling with fertility issues and were elated at the prospect of parenthood.

Those who have followed the numerous allegations about Richardson's sexual misconduct over the years will be less elated.

That will be fun to show the kids!

Bolotow has stood by Richardson through all the impassioned charges against him by models who spoke of being pressured to perform sex acts on him and threatened with the loss of their career if they refused.

In a particularly disturbing 2014 profile on Richardson in New York magazine, Bolotow countered the allegations with this argument:

I think part of being a strong woman is owning the decisions that you’ve made in your life. Trying to put the onus onto someone else for your own decisions is really cowardly and kind of dishonest.

This defense of Richardson's behavior was taken as a blame-the-victim insult to the young models whose stories were widely published online and in print.

The allegations and resulting outcry against Richardson's untouchable status with high-end agencies did seem to bring about change. Some magazines and fashion brands commented in public statements, promising to refrain from hiring Richardson in the future.

But Richardson is still one of the top photographers around, notably shooting and appearing in campaigns for Valentino, and filming videos for pop stars Miley Cyrus and Lady Gaga.

The Instagram announcement came after Page Six posted the pregnancy story, confirming a rumor spreading among the photographer's friends. Richardson told his Instagram followers this:

Babies' first Page Six shout out! We weren't planning to make this news quite so public quite so soon, because we are very cautious after going through some very difficult and heartbreaking losses, and always afraid of jinxing it, but since the cat is out of the bag... Skinny and I are very excited to let you guys know that we are expecting TWINS in the spring!!! This has been a difficult journey and we are so thankful to be surrounded by so much love and support from our friends and family, and some incredibly smart doctors! I'm sure the kids will be excited to use this as a Throwback Thursday one of these days!!!

Will fatherhood tame Terry Richardson or bring out a protective side we have yet to see? Or is it cause for concern, given his reputed conduct with young women over the years?

Is it too much to ask for social services to keep an eye on his twins? Or should we just hope they aren't girls?

Marilyn Manson Punk'd By His Dad

He pees on his audiences….decorated a deaf, naked groupie in hot dogs and salami while a band mate effed her…gives shout outs to convicted murderers....and once plunged a broken beer bottle into his chest on stage—but Marilyn Manson is still a daddy’s girl at heart.

Hugh Warner, Marilyn Manson's father, totally punk'd his antichrist superstar son while he was modeling for the March Paper magazine cover by crashing the shoot in Manson style—all black everything, kabuki face, and blood-red lips so overdrawn even Kylie Jenner wouldn't approve.

The Vietnam veteran and his ordained Satanist son hammed it up like a couple of schoolgirls playing dress-up for alleged sex predator perv photog Terry Richardson, then they all sacrificed a puppy together and drank its blood.

No, they probably did though.

Manson discussed his father during a candid interview with the Guardian earlier this year.

I think that he was very, very good at what he did. In the same way as the character that Martin Sheen plays in Apocalypse Now. I think my father was selected to do a job.

He entered the air force at 17 and you just don’t know what your life is going to be at that age. He never talked to me about it. He still hasn’t really spoken of it.

I think it was after my mother’s passing that he felt it was a time where it was necessary to tell me: ‘This is who I really am.’ And I think he was selected for being good at what he did – and that was killing people.

Some new photos from Nicki Minaj's Rolling Stone cover shoot with photographer slash pornographer Terry Richardson have emerged, and as expected, they contain a lot of boobies.

Her Minajesty puts the booty away for once and brings out the girls in the patriotic photos, which show her posing in a skimpy tank top bearing the American flag.

At this point, shouldn't Nicki just go all the way and do Playboy? Or even a sex tape? She's got the body for it, and these days we see her in g-strings and pasties more often than we do fully-clothed. She may as well just show us the whole enchilada instead of remaining a perpetual tease. 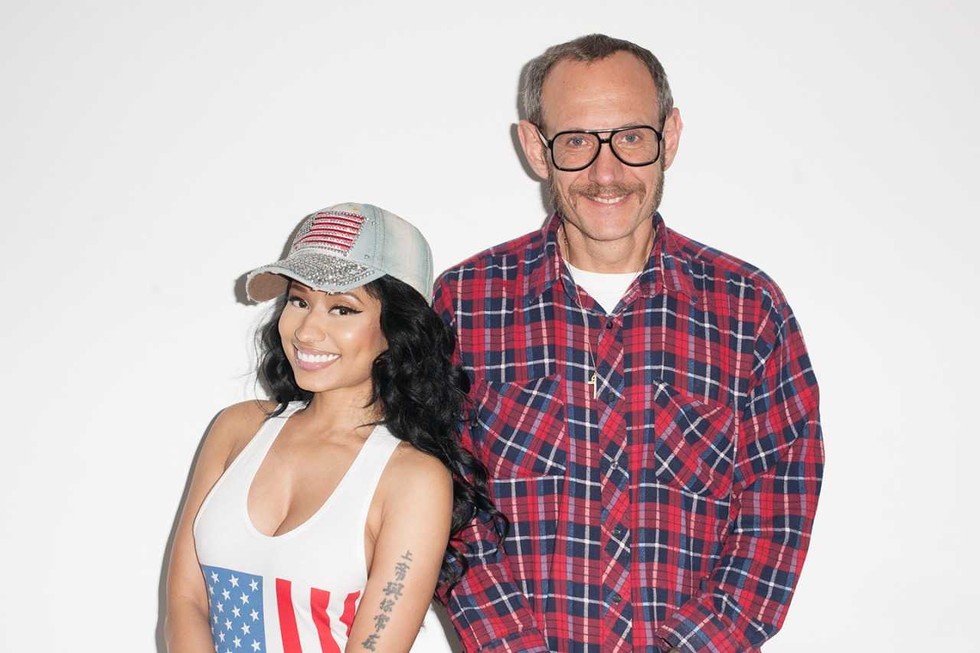 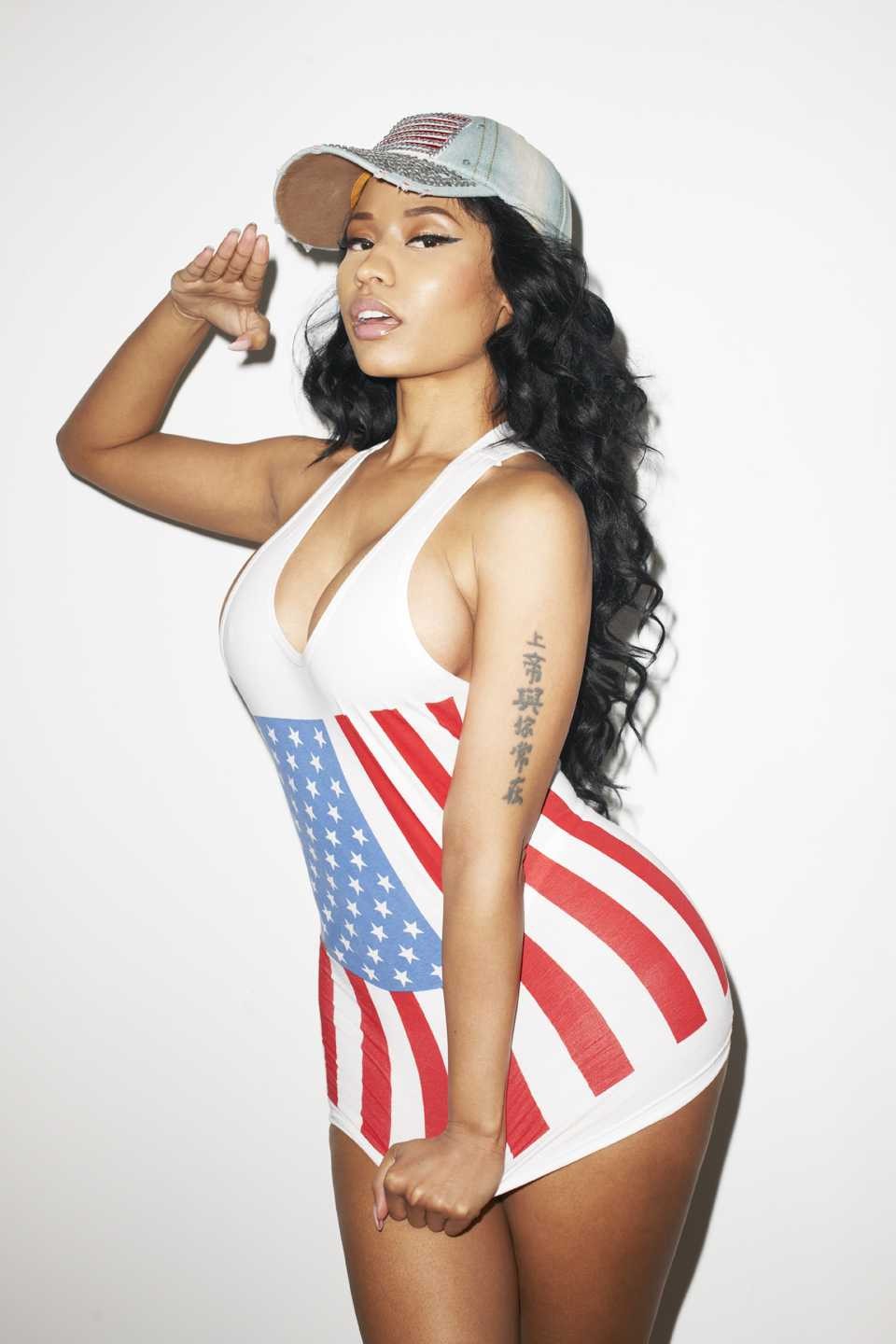 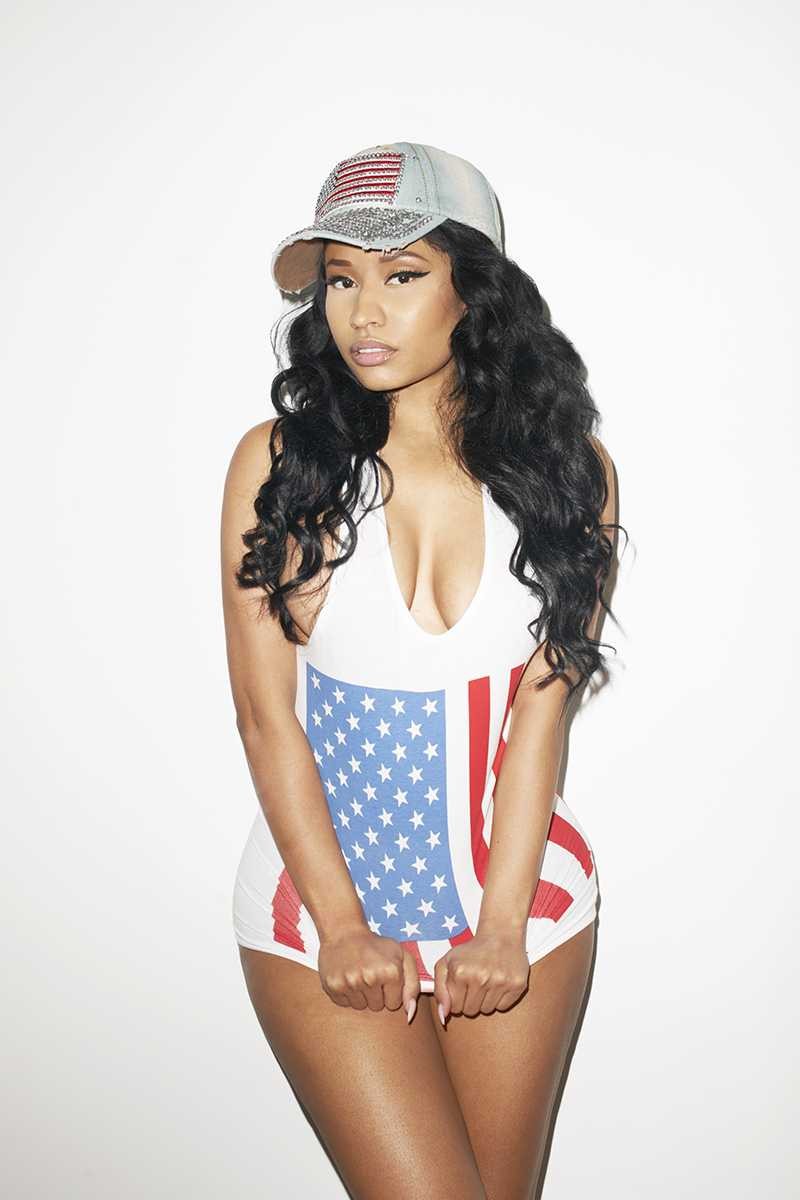 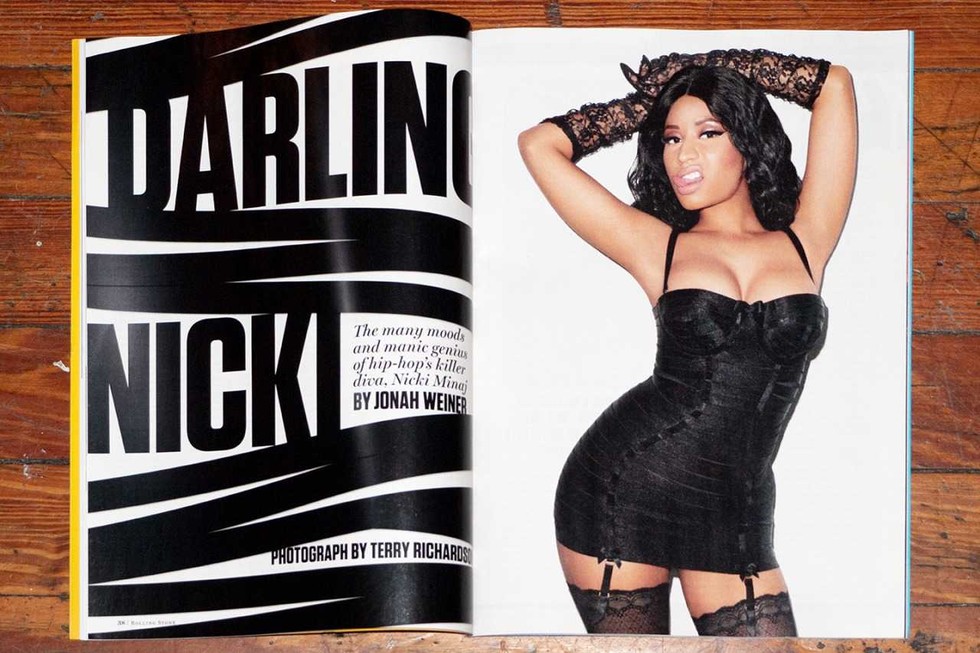 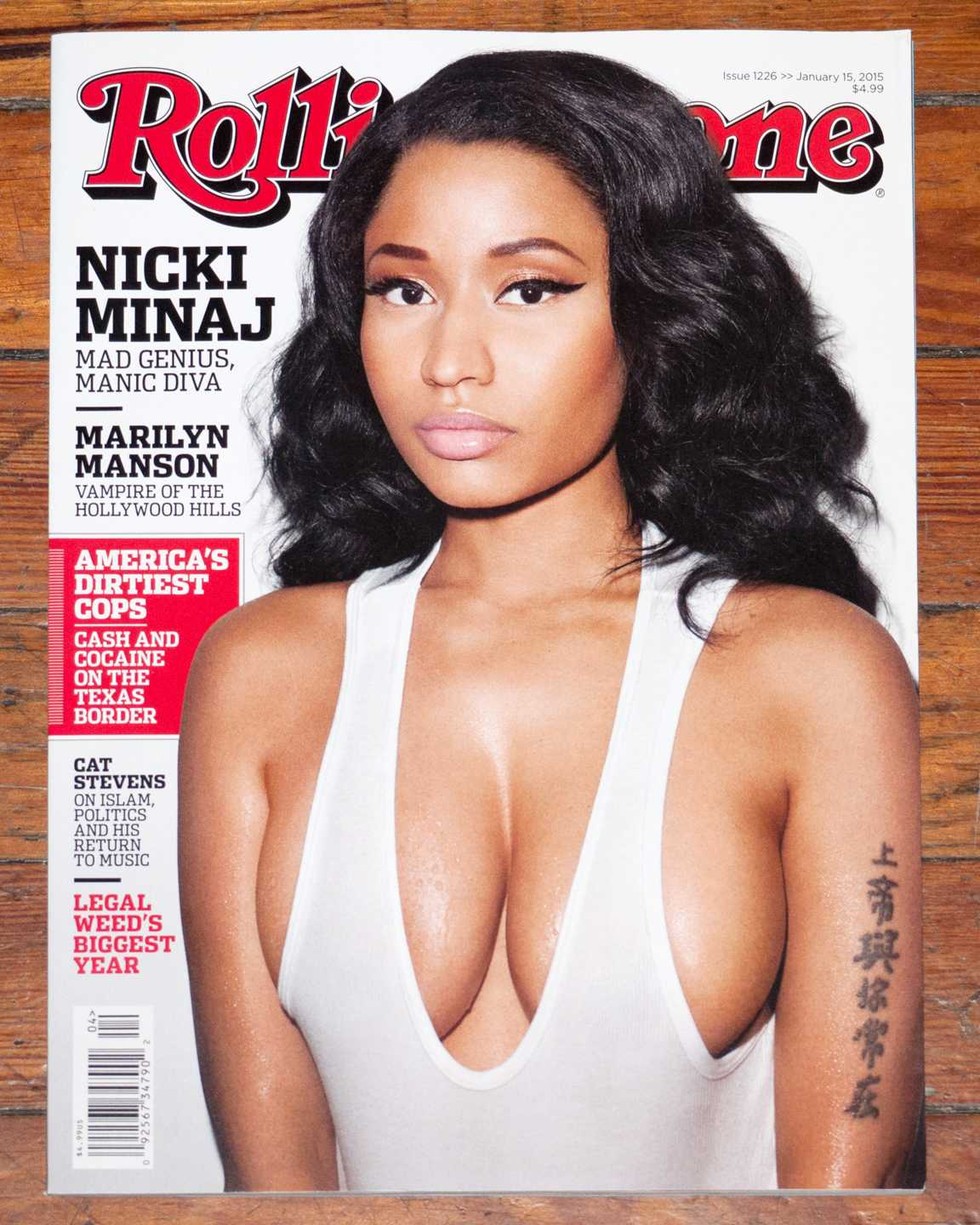 Terry Richardson and Dov Charney are the supercreeps of supercreeps so it's just perfect that Funny Or Die would turn their razor-sharp beam of satire on them.

The gruesome twosome are spoofed in an America's Got Talent/Next Top Model type show called America's Next Sick F*ck. Which is perfect, because they've have really set the bar high when it comes to being allegedly disgusting, exploitative pieces of shit.

America's Next Sick F*ck from Funny Or Die

Wonderland Mag Treats Mariah Carey To A Digital Make Over

Terry Richardson is known as the anti-glam fashion photog (among other things; see: Popdust) and revolutionized the glossy world with his raw, untouched images.

but Wonderland magazine decided that Mariah Carey, their summer cover girl, does much better with little retouching. Jezebel obtained the unretouched images and we can see just how much magic went into the final images.

The editors treated Mimi to nonsurgical breast implants, a tummy tuck, an all over- spray tan and hair extensions!

Justin Theroux showed his mavericky side over the weekend by strolling around Soho with accused pervert/photographer Terry Richardson.

On the eve of his new HBO series debut (The Leftovers), Theroux may be sending a message to fiancee Jennifer Aniston that he can't be tamed. What better way to broadcast his defiance than hanging out with a pariah? 'Look at me!' he seems to be saying. 'I'm an edgy guy, not Mr. Friends!'

Then again, Justin has already established his badboy cred with his black sportswear and his motorcycle. He hardly needs to hammer us over the head with it.

In that case, maybe Justin is just an ignorant know-nothing, unaware that Terry Richardson's social standing hovers somewhere between Idi Amin and Roman Polanski. Perhaps Justin has been so preoccupied with avoiding marriage that he's missed all the headlines.

What do you think Justin is up to? Weigh in, below.

Miley Cyrus OBSESSION With Being Naked Is Proven By Popdust. Here's All Her NSFW Nude Photos