Charles Manson Could Never: Five Cults That Put a Spell On Hollywood

These cults had some of Hollywood's brightest stars in their shadowy grips.

Celebrities are not known for their ordinary lifestyles.

In fact, sometimes it can seem like they're a different species of human, living elite existences of wealth and opulence that none of us average Joes can imagine, let alone attain. Maybe that's why people are so obsessed with the idea that our favorite celebrities are actually members of ancient, mysterious cults.

Actually, it seems that real-life cults are typically comprised of people who want to be in this celebrity culture, or who are otherwise seeking escape or meaning in their lives. On the 50th anniversary of the Manson murders, Once Upon a Time In Hollywood brought a leader of one such cult—Charles Manson—back to the public's consciousness (if he ever left).

That said, here are five of the most notorious cults with connections to Hollywood and celebrities. As for the first two, whether they're actually real (or just manifestations of the public's dreams of tapping into whatever mysterious powers celebrities possess) is up to you to decide.

Image via The Wrap

The Illuminati is by far the most famous celebrity cult. Its members apparently include Beyoncé, Madonna, and Katy Perry, as well as a multitude of world leaders and very rich people. Conspiracy theorists believe that the illuminati is seeking world domination and wants to establish a totalitarian "New World Order."

The Illuminati was real at one point. In 18th century Bavaria, Adam Weishaupt created a society called the Order of Illuminati in order to escape the confines of the Christian church. His society was stamped out by a government crackdown on cults, but many believe it still exists today, forming a subterranean, diamond-lined web that controls the motions of our ordinary lives.

The modern-day perception of the Illuminati originated in the 1960s, with the help of LSD, counter-culture, and a book called the Principia Discordia that preached civil disobedience through jokes, hoaxes, and misinformation. In this spirit, a man named Robert Anton Wilson wrote letters to Playboy claiming to be speaking on behalf of a secret society called the Order of the Illuminati, and the idea caught fire, gaining more traction with the rise of the Internet age. Today, everyone from the Founding Fathers to Rihanna has been accused of being a part of this peculiar organization. (Rihanna, for her part, has embraced her Illuminati membership, even calling herself 'Princess of the Illuminati').

The Illuminati theory is closely tied to an even stranger one—the idea that famous people are secretly intelligent lizards from the moon who are masquerading around Earth disguised as humans. If that sounds insane, it's true, and people do believe it—around 12 million Americans, according to some (admittedly questionable) polls.

The lizard people idea originated with New Age philosopher and TV presenter David Icke, who claims that world leaders like George W. Bush and Barack Obama are secretly all scaly aliens. Other purportedly reptilian people include Bob Hope, Angelina Jolie, Katy Perry, and Queen Elizabeth (or, should we say, Elizardbeth?)

Like the Illuminati, lizard people want world domination. According to the theory, these lizard people have been on Earth since ancient times, and they've been breeding with people for centuries—so in all likelihood, you too may have a few drops of lizard blood flowing through your veins.

There is nothing that tabloids love more than Tom Cruise and his belief in scientology. Unlike the Illuminati and the lizard people cult, scientology is very real and very present in Hollywood. So what is this strange form of worship?

Scientology was actually founded by science fiction writer Ron L. Hubbard, and among other things, it proposes that man is an immortal being with a divine purpose that can be attained through enlightenment. It's also been called a malicious commercial enterprise and a cult by critics, so there's a bit of a contradiction there. Celebrity scientologists include John Travolta, Kirstie Alley, Juliette Lewis, Elizabeth Moss, Laura Prepon, and more, and the cult is still going strong in the Hollywood hills.

This group is very much still alive and well. It was founded in the 1920s by the guru Paramahansa Yogananda, who eventually gained followers in luminaries such as Elvis Presley and George Harrison. Before joining the Manson family, Leslie van Houten also spent time in Yogananda's Mount Washington ashram.

According to Yogananda, the fellowship's central practice—called Kriya Yoga—was originally given to Manu, the first man on Earth, according to Hindu scripture. Their temple on Sunset Boulevard is the oldest in America, and dozens of others are in operation around the world. While not known as a malicious cult, the Self-Realization Fellowship deifies Yogananada as Christ reincarnated, and its sacred lessons are kept super-secret from the public, so it's hard to know what actually goes on in there.

This very real, very ugly cult was only recently disbanded by law enforcement, after the founder of NXIVM was accused of sex trafficking and child abuse, and members have testified about a culture of lies, deceit, and violence.

The cult was led by Keith Raniere, with Smallville star Allison Mack as his right hand woman. According to reports, members of the cult were branded with Raniere and Mack's initials, referred to as "slaves," and subjected to corporal punishment at the hands of their leaders.

The cult found its footing in the wellness industry, which is very popular in Hollywood (and is arguably a cult in and of itself). It drew members in by promising to help them find more meaning and joy in their lives. Many of its members were very wealthy, and when money failed to satisfy them, they began turning to spirituality and wellness as ways of improving themselves.

The wellness industry and cults go hand in hand, because both often request large sums of money and promise that various levels of suffering are required in order to achieve the promised results. Still, Raniere and Mack's cult obviously spiraled way too far into darkness and corruption to continue masquerading as a healing force—and they'll face the jail time to prove it. 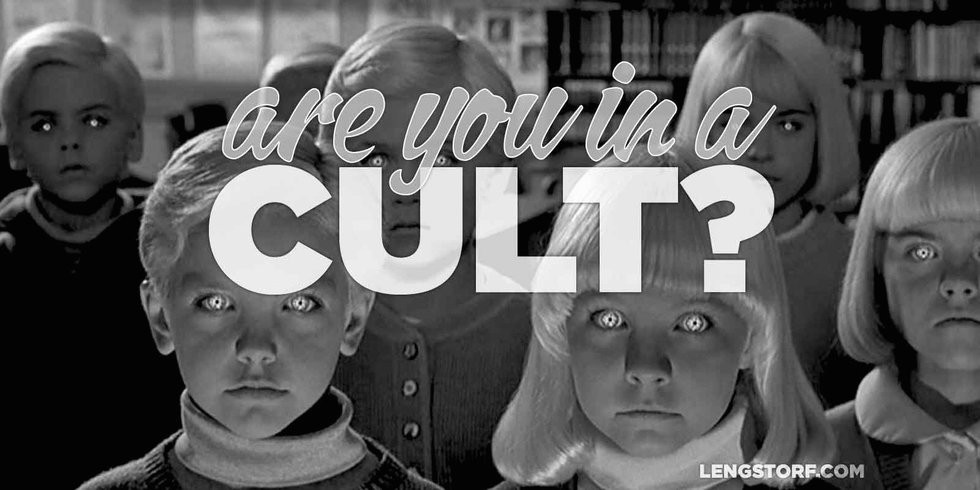 Clearly, celebrity status and fame do not equal happiness—if they did, celebrities wouldn't be pulled into these cults so easily (and they wouldn't overdose on drugs so often, either). Still, for those of us on the outside, it's so easy to fall for the mystique of Hollywood, with its glorious parties and its brilliant stars, glorified to godlike levels by their fans and the media.

In the surrealistic circus of Los Angeles, ecstasy often blurs into suffering, and so it was, is, or may be with these cults. In this world, power breeds corruption, beauty equals pain, and metamorphoses towards greatness quickly become awful mutations. In the shadow of these truths, it's easy to understand why suspicious minds have crafted illusions like the Illuminati in order to explain why the world's elite are the way they are and to feel some semblance of power over humanity's mysterious actions. Now, is the real cult here a secret conspiracy of the rich and famous—or is it simply advanced capitalism? Well, just remember, comrades: A cult leader has no power without his followers.