THE REAL REEL | What A Catastrophe

Thank you Amazon for bringing Catastrophe to the States.

It's just what I needed to fill up my soul with mindless, sharp-tongued wit, which even my male partner will endure. Aside from it's fast paced humor, which fulfills my need to keep things "light" during my pre-bedtime viewing routine, it also hits a few realistic nails on the head. Yes, it's a far flung plot that an upper middle class, overly educated woman might accidentally get impregnated on a one night/week stand with another over-educated upper middle class bloke from over-sees and decide to keep the baby, however…it's not far fetched that this woman would want these events to happen.

Did I say she wanted to get "accidentally" pregnant? Well maybe incidentally is a better word. It's 2018 and educated middle class woman want their cake, and they want to eat it too. The cake being their career and 'eating it too' being the baby. Hmmm I may need to work on that analogy. Either way you get what I am saying. Educated, women are professionally successful because they didn't pull themselves out of the game when they were 25 or 30 to have kids. They worked late nights, early mornings, took work trips, racked up degrees, moved all over for jobs, and dated in between it all. Now, they have their career and can afford to take their eyes off the ball (the ball being their career) for a hot minute, to have a baby. Only one challenge… they need sperm.

Oh right, a partner comes with sperm, but it also comes with many other things. If you are straight, this sperm might not have had time to notice you as you were working 60 hours a week and didn't date much. This sperm might not want to marry a 35+ year old, who has a career that outshines his own. This sperm might become emasculated at thought of this powerful female/uterus providing a higher annual wage and health benefits for the family. This sperm in the form of a longtime partner who you have aged beautifully with might not exist.

How many women are having babies outside of traditional unions (what our society actually does still view as a "catastrophe")? 40% That's over 1.6million babies are born to unwed mamas. (Why is unwed-father not a thing?) Yes, some of that is due to poverty, but some of that is due to the reduced pressure to marry in general. Since women no longer feel as much pressure to be married, they may wait on both marriage and kids. Either way, we all know amazing women who are successful with remarkable careers, who decide that they are finally in a good place…or finally running out of time to have biological children. At this point, attempting to conceive becomes a non-negotiable as the clock has struck. What does become negotiable is the participation of another human being. This unchartered territory, where partner becomes negotiable is becoming more and more prevalent, but still leaves women to walk a road not publicly and purposefully travelled by most.

The "Catastrophe" in real life, and on this show becomes the questions that married couples get to avoid… unless they get divorced. The truth is, the second you find yourself in any non-hetero-normative situation, you will be asked a million questions. Questions like, well 'whose last name will the baby have?', and 'is he is a donor or the father?' 'Will you all live together?' 'If you are not married, what happens if you break up?' 'What do your parents think?'

I have friends who are married who have or plan on having kids who actually don't know the answer to any of these questions. In fact many married folks disagree on every level of politics, don't share a belief in the same religion, don't know who their kids will live with if they die, and could be on the verge of a separation… but are completely left alone by society, unquestioned, and undoubted because they are MARRIED. It's like a little certificate that legitimizes everything and anything.

On the other hand…if you are not married, but decide to purposefully get pregnant, or choose to keep a baby that managed to set up shop in your uterus, or even adopt on your own… don't you think this is the group of people that have thought about these questions the most? Even if it was only for the nine months you had to prep? This is the group that should be called The Planners while the rest of us Married folks address all the Catastrophes that "happen" in our perfect married lives. It's only the destruction of something that seemed impervious to shake-ups that should be called a Catastrophe.

This show reminds us that if you don't want to be seen as a Catastrophe, all you have to do is get married to the opposite sex and the world will validate your entire life, assuming you have all your little ducks in a row. I love when the main character Sharon goes to an acquaintance's house for dinner and the whole night is a disaster. Her friend is a total mess but insists on portraying herself and her life as a masterpiece of well-planned, perfectly timed and executed matrimony.

This show is a reminder that no matter what your relationship status is, you should never stop asking questions; to your partner, yourself, your spiritual belief system, ect.. Question how you live, where you live, who you live with, and why? Certainly it shouldn't just be "because we are married." Married or not, everything should be called into question and be up for debate, if only to reinforce what you already believe. On the other and, you may wake up and realize that you have gotten yourself into a real catastrophe that needs some major tweaking.

Apologies, but my inner life-coach is rearing its head, and asking all of us to be brave and look at the labels we hide behind; our job titles, married status, our investments, assets, parental status, ect.. I think the real Catastrophe is avoiding looking at the mess. 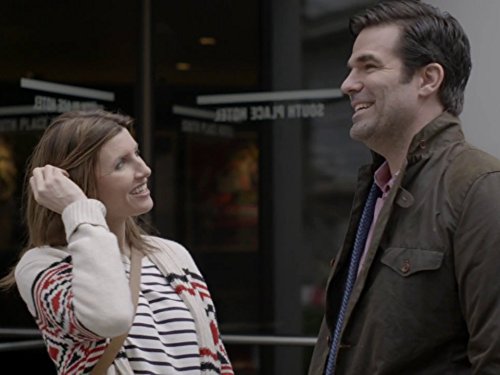 By Rachel Hall, Rachel has a Masters in Cultural Gender Studies, and a BA in Communication & Culture, is a Certified Life Coach, and can often be found hiding in her laundry room from her two children. More about her on her website.

THE REAL REEL |SMILF: Single Mom I'd Like To Friend