This Haunts Me: Jeffrey Epstein Didn’t Kill Himself

It was an inside job.

TW: This article contains references to sexual assault and abuse.

Let's get one thing straight: Jeffrey Epstein didn't kill himself.

According to official reports helmed by top medical examiner Dr. Barbara Sampson, Epstein hanged himself in his cell—but later medical reports suggested that his injuries resembled those of a homicide more than a suicide. When Epstein died, he had been removed from suicide watch, left alone and not checked on for hours because the two guards assigned to watch him were "sleeping," and, conveniently, the cameras outside his cell "malfunctioned." Recently, a former Navy SEAL went on Fox News and blurted out, "Jeffrey Epstein didn't kill himself."

Though the death of the wealthy financier has a thrillingly macabre storyline, one that reeks of foul play, it's also worth considering deeper reasons why the Internet has latched onto the phrase Jeffrey Epstein didn't kill himself. This sentence has spawned a fleet of conspiracy theories and has become a viral meme that expresses a deep-rooted disillusionment with everything Epstein stood for: capitalism, greed, a twisted kind of American dream that meant he could do whatever he wanted, with anyone he wanted, simply because he possessed money and power.

Epstein had ties to a coterie of powerful people, which lends endurance and intrigue to his legacy. It's unclear as to how high up his influence actually went, but he had friendships with Bill Clinton and Donald Trump as well as ties to illicit activities that stretched across the globe. Recently, it was revealed that Epstein's alleged madam Ghislaine Maxwell attended a secretive writers' retreat with Jeff Bezos, and Maxwell was recently arrested on sex abuse charges.

Epstein himself was buddy-buddy with proven pieces of absolute garbage like Woody Allen, Lawrence Krauss, and Harvey Weinstein, and his network extended to other powerful, though yet-to-be-condemned men including Victoria's Secret CEO Leslie Wexner and Prince Andrew. One would imagine that a lot of people might understandably have wanted him dead.

It's hard to believe that these powerful people—flush with almost unbelievably exorbitant amounts of money, tied to each other by perverted sex rings and who knows what other illicit, horrific secrets—didn't have some sort of running pact, some way of holding each other accountable for their secrecy and loyalty.

Enter Jeffrey Epstein didn't kill himself, a phrase that has become a rallying cry for everyone who feels they've been screwed over by the system. The meme is a symbol of the fact that though we might not know exactly what's going on, we know: There's something rotting in the higher-up echelons of the powerful systems running America and its globalized, neoliberal reach. There's something poisonous in the water, a cancerous cell in the brain, a tab of LSD slipped into our bourbon. We might not know how or when, but we know it's there.

Ironically, this might actually be one place where the radical left and redpilled members of the far-right could potentially meet, united by a tenuous hatred of the systems currently in power. It's a shallow unity that could hit an iceberg any second, but its potential shouldn't be ignored. It crosses party lines in that it condemns both Trump and the Clintons, and it's united by a thread of emotional reactivity that circumvents established logic and reason, exchanging them for more appealing emotions like irony, nihilism, and hope.

For better or worse, conspiracy theories have been uniting today's revolutionaries for a while. Embodied by everything from Pizzagate to the reborn obsession with Area 51 and its aliens, they veer from outright absurd to endearingly detached from reality, but they all contain an ominous coal of truth. The government is hiding something but everyone knows it, these conspiracies seem to say. Epstein didn't kill himself. We are being lied to.

The lies might not be as carefully hidden as we think. We don't have to speculate about underground sex rings to know that billionaires like Jeff Bezos are taking advantage of us, stealing from us, hoarding their fortunes, and paying zero taxes while everyday people struggle to get by. We know that coal and oil companies are raking in our cash and sponsoring our politicians while they belch smoke into the air and ensure the heat death of our planet. We know that the MTA could be using the money that it's spending on fare evasion enforcement to fix its broken transit system. We know that we could be taxing the stock trade to help pay for universal health care. Jeffrey Epstein didn't kill himself.

This isn't to say that conspiratorial thinking is the way to fix the aforementioned issues. These trains of thought are dangerous in their general disregard for factual information, their roots in reactive anger, their lack of foresight, and their dearth of empathy and critical reflection. When they're entirely made up or when they're injected into our minds by Russian plants, they can be deeply destructive.

But the sentiments behind them could also be extremely powerful, if harnessed for the right reasons. They seem to promise that if enough of us just wake up, if enough of us unite in the knowledge that Jeffrey Epstein was murdered in his cell, we can take down the billionaire class and the diseased sickness that late capitalism has inflicted on our lives; and perhaps we can ensure that the next generations' futures won't be as blighted as they seem likely to be. 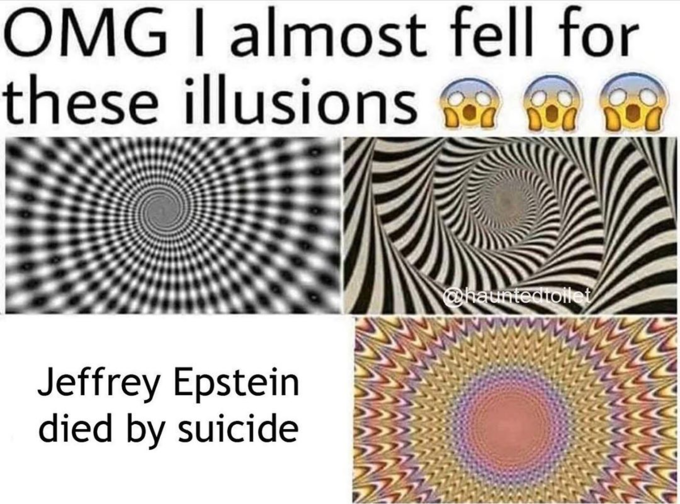 The Epstein memes themselves are interesting cultural case studies. "It's telling how quite a few of the memes are in the style of a bait-and-switch, lulling the reader into the assumption that they're learning an obscure piece of trivia, then swerving hard into the Epstein stuff—like the only way to circle attention back to the story is by deceit," writes Miles Klee in MEL Magazine. "You might even say that endlessly repeating 'Epstein didn't kill himself' or 'the cameras in Epstein's cell were turned off' as a mantra breaks the contours of this singular intrigue to comment on the broader Age of Gaslighting."

To gaslight is to make someone feel crazy for identifying a behavior or problem that's really happening. Through this lens, the Epstein memes insist on the validity of our collective paranoia, our shared feeling that something is very wrong with the way things are being run.

Jeffrey Epstein memes succinctly "[resist] and [condemn] the brazen, insultingly sloppy lies told every day by the ruling class, who stoop lower and lower to protect their money, reputations, influence and neo-feudal systems of control," continues Klee. "The ongoing distortions of reality—the mountain of misinformation you sift through as a consumer in the digital space—make it imperative that we continually remind ourselves of what we feel to be the blinding truth."

Some have criticized the Epstein memes for their hollowness, arguing that they paint a serious issue as a joke while doing nothing to actually hold powerful people accountable, or that they further a malicious misinformation campaign.

Still, the memes' long lifespans objectively indicate that we the American people are questioning those in power and the late capitalist systems that put them there. This boomer-led late capitalist system is what tells us that universal health care is a pipe dream when every other large rich country in the world has a better system than ours.

Late capitalism is what told people like Jeffrey Epstein that he could rape underage girls, that he could own numerous multi-million dollar homes, that he could take whatever he wanted, and that he could get away with it for decades. Maybe late capitalism's favorite son—the Internet, that weird shared collective space where ideas can catch on like apocalyptic viruses—could be the faint blue light that guides us out of it.

Most likely, it'll just guide us into some other labyrinth that legitimizes abuses of power, but hey, at least we can go down clinging to the bitter satisfaction of knowing that Jeffrey Epstein didn't kill himself.

What is So Sexy About A Man Who is Just So Sad?

Emo Boys Up: Pete Davidson, Batman, the Sandman, and the Rise of Sad Boy Culture

My Residency At Harry’s House