Reviews of "Don't Call Me Angel" for 7 Types of Fans

There's something here for everyone.

Miley Cyrus, Ariana Grande, and Lana Del Rey just dropped their new video for "Don't Call Me Angel," and how you feel about it will differ depending on what kind of fan you are.

So, in order to avoid incurring the wrath of one of these pop queens or her battalion of fans (and to draw attention to the inherently subjective nature of music reviews, but that's another can of worms), we've tailored our review to adapt to the perspectives of each type of listener.

Ariana fans—today is our day. If this was American Horror Story: Coven, then Ariana would undeniably be the Supreme of this video. From beginning to end, Ariana soars above the rest; like a sun, she illuminates everything around her, and the rest of us are lucky to exist in her stratosphere.

Dressed in ravishing white and glowing with all the magnetism of a heavenly being, she sets the scene for the song and guides it towards its electric chorus. Her silky voice sounds as flawless as ever, and it's not hard to see why she's one of the most successful pop stars of her generation. Between her peerless vocals, her radiant appearance, and her enchanting presence, she has the camera wrapped around her little finger from the first moment she appears.

Ariana has been through so much and has come through her pain without a hint of bitterness or vitriol. She's the embodiment of resilience, and her strength and beauty is an inspiration to us all. Here, she does a victory lap, confident in what is sure to be a very long legacy.

Miley Cyrus is clearly the strongest and most forceful presence in this video. Finally, it seems that she has found a balance between the chaos of her Wrecking Ball era and the cloistered calm of Younger Now. Here, she's older, wiser, and tougher than ever before. Having shattered the binary restrictions of her Hannah Montana days, now, she's not playing any role except for herself. She's owning all her contradictions, running her own life, and inviting us to follow suit. When she spits out, "I make my money and I write the checks / so say my name with a little respect," it's chill-inducing, and these lines are even more powerful considering that they come in the wake of her separation from Liam Hemsworth (who she may or may not have been calling out). 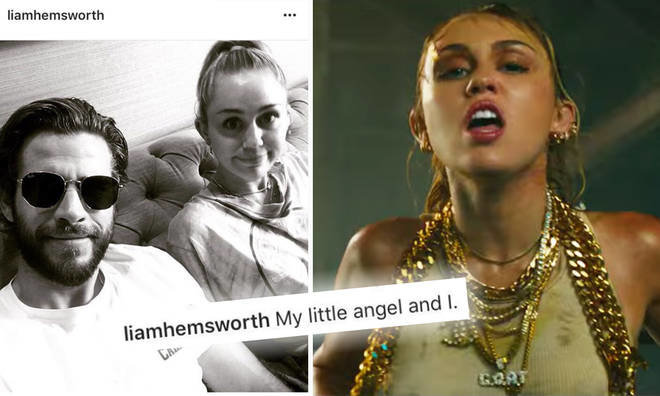 By challenging gender norms and refusing to comply with any normative aspects of sexuality, and by unapologetically owning her dominance and power, Miley is at the forefront of the modern feminist revolution. While the other two artists remain trapped by old-fashioned ideals of female subservience, Cyrus literally ties these concepts to a chair and beats them bloody.

Lana Del Rey is criminally under-featured in this video, but when she's finally allowed to emerge from the shadows, it becomes clear that she's been in power all along. When her verse kicks in, a song that had previously been a shimmery and forgettable pop tune shifts to a dreamlike and sultry blend of psychedelia and trap, and Lana's whispery drawl eclipses the others' howls and shouts. Here, she's alternatively a devilish seductress illuminated by flames and a leather-clad, knife-wielding powerhouse, manning the computers and sending waves of helicopters out with the click of a button. This might as well be a metaphor for the kind of power she has in pop culture: All of her actions float outwards like soundwaves, spawning millions of copycats and creating indelible impacts on new generations of musicians.

Lana has never felt the need to put on the kind of antics on which Cyrus and Grande have built their careers. Keeping her private life shrouded in mystery, she bides her time and saves her wisdom and energy for her music. Quietly, Lana has carved a space for an entirely new kind of female pop star, and each artist (and the video's overall aesthetic) is indebted to her world-building talents. She has always refused to comply with any preconceived notion of what it should mean to be a woman or a writer, destroying stereotypes and embodying a wild kind of individualism and sexuality that puts her in a class of her own.

Why do we always feel the need to pit women against each other? Lana Del Rey, Miley Cyrus, and Ariana Grande are some of the most talented pop artists alive today, and we should celebrate the fact that they're all working alongside each other, not compare them. The video is a triumphant celebration of three icons, confident in their strength, completely owning their sexualities, and eviscerating all the forces that hold them back. Together, they destroy their enemies in their own unique ways, embodying different facets of womanhood and power but ultimately each playing an integral role in a gorgeous and cinematic work of art.

Seeing all these artists come together is a blessing in and of itself. Imagine how the set must have felt with all of them in it—with all the force of their creative visions, strength, and magnetism conspiring together to create an explosion of sonic and visual magic.

Charlie's Angels is a franchise predicated on female sexualization and the glamorization of violence. This video's overt white feminist ethos is completely based on a patriarchal concept of power, and it's ultimately damaging to feminism.

When will we start listening to women's real voices, and stop glorifying white women's ascension to violent, patriarchal positions of power? Feminism must be intersectional, not based on the actions of conventionally attractive white women; and it cannot continue to glamorize phallic symbols of authority like guns and knives. Instead, we must create a new reality that addresses the intersectional nature of third wave feminism, or at least stop praising videos that glorify female sexualization and spectacular violence.

This video is not about female solidarity, as each woman appears in a different frame, and they only come together at the end—whereas Charlie's Angels is, at its best, about the bonds between women, not their fraught relationship with men. (At its worst, it's an archaic and problematic show that has always profited off the subjugation of young women).

Ultimately, the video pales in comparison to Destiny's Child's Charlie's Angels promo song. Also, Ariana Grande's chorus completely copies Rihanna's "B*tch Better Have My Money" (just listen to 1:29)—and at the end, Elizabeth Banks appears and literally calls them angel, driving home the video's hypocrisy, as all these women have just spent the entire video asking not to be called angels. Canceled.

This video shows what will happen if feminism is allowed to progress the way it's going. The Miley Cyrus scene is an example of blatant violence against men, justified by the existence of feminism, and this trash is exactly why Trump needs to win in 2020.

Sure, all three of them are smoking hot, but they don't show nearly enough skin. They're also wh*res who should put more clothes on. Also, these women seem not to want to be called angels, but they're dressed like angels, so obviously they do want to be called angels. Why won't women ever say what they mean? The female species is so confusing, and not only because none of them will sleep with me even though I'm a really, really nice guy.

7. For People Who Don't Care

The Amazon Rainforest is BURNING, there's a global water crisis that's doomed to worsen before the planet dies in 2050, and genocides are going unchecked in China and North Korea. Get off Twitter.

Related Articles Around the Web
don't call me angel review

We All Lost the Floyd Mayweather and Logan Paul Fight

Who do you root for when the man with the most punchable face on the planet gets punched by someone equally awful?

She's not just Blanca from Pose, MJ Rodriguez is stepping into the music industry as Michaela Jaé with her first single