Between racism, fashion faux-pas and technical difficulties, there was certainly a lot to unpack in the ceremony, so we did it so you don't have to.

Tina Fey and Amy Poehler at the Golden Globes

Another awards season is upon us.

Despite delays for some major shows due to COVID, the Golden Globes kicked off the virtual awards season this weekend. Hosted by Tina Fey and Amy Poehler — another win for white women before the show even began — the 2021 Golden Globes were held in a bicoastal ceremony between New York, LA, and the internet.

Even before the ceremony began, eyes were on the Golden Globes for the controversy surrounding Emily in Paris receiving nominations over I May Destroy You — and the ensuing revelations that the Emily in Paris producers flew out the Hollywood Foreign Press Association (the judges of the Globes) for a luxury tour of Paris, which explains some things.

What's racism in the face of a good croissant?

Lily Collins and an unsuspecting croissant in Emily in Paris

Between racism, fashion faux pas, and technical difficulties, there's certainly a lot to unpack at the Golden Globes — But we did it so you don't have to.

​A Zoom Meeting that Could Have Been an Email

As tedious as awards season gets — we're subjected to watching the same movies getting the same awards for weeks — last year's awards season feels vaguely pleasant in my memory. Sure, I was still watching from my own house, but I wasn't witnessing everyone else also sitting in theirs.

However, the innocence of yesteryear has been stripped from us in an apocalyptic year, which has now brought us here: with neither me nor Al Pacino very impressed by the online proceedings.

Something about the illusion of awards shows is shattered when you're watching grainy footage of someone all dressed up to sit in their house, while you're doing the same thing in sweatpants eating that TikTok pasta.

At first, I was ready to go along with it, despite the weirdness of Tina Fey and Amy Poehler appearing on a split screen from across the country, Fey in New York and Poehler in LA.

However, though they got through their cross country monologue pretty seamlessly, there were a few glitches, like Daniel Kaluuya's speech being muted after winning Best Supporting Actor for his incredible performance in Judas and the Black Messiah(on the last day of Black History month … hate to see it).

He appeared, audibly, for a second after the producers cut away to apologize, exclaiming, "You're doing me dirty!" Which, they were, and which felt like an omen for the night.

Despite the strangeness of feeling like I had Zoom-bombed an illuminati meeting, the tele-proceedings did provide some voyeuristic insight into celebrity mansions.

Like an Architectural Digest highlight reel, the night was a feast of curated bookcases and statement walls. There was also a satisfying amount of chaotic background energy from Ryan Murphy's warehouse-looking, brutalist hangar, Colin Farrell in a tuxedo in his unlit room, and Cynthia Nixon's Bernie Meme.

It was also a strange night in fashion, as celebs showed off their waist-up looks. Still, there were some fashion highlights — Rosamund Pike of I Care A Lot in a frothy red mountain of tulle; Cynthia Erivo in a lime green "scuba dress."

Not everyone pulled out all the stops though. Some, like Bill Murray, carried the age-old torch of Globes-drinking and raised a martini glass while in a casual printed shirt; while Jason Sudeikis was apparently stuck in phase 1 of quarantine in a tie-dye sweatshirt (though the photos of his ex-fiance, Olivia Wilde, with Harry Styles probably did not help).

In any case, some of the degrees of effort were definitely giving these vibes: 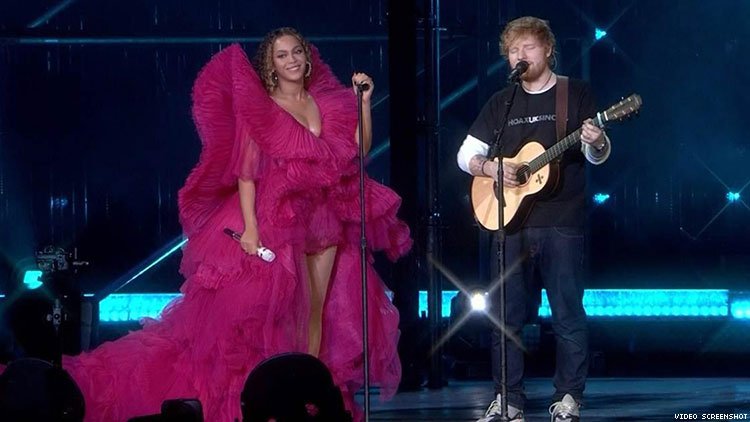 In classic self-aware-award-show-monologue style, Tina Fey and Amy Poehler began the show with jokes about the disappointing nominations.

"Look, a lot of flashy garbage got nominated, but that happens, OK?" said Poehler, "A number of Black actors and Black-led projects were overlooked."

Despite the nomination disappointments, the awards were given to a more diverse range of actors in a gesture that felt placating but was historic, nonetheless.

Chloé Zhao (director behind Nomadland, starring Frances McDormand) became the first Asian American woman to win Best Director for the film, which also won Best Drama. In her speech, Zhao talked about compassion, which she defined as a "breakdown of all the barriers between us."

There were other notable awards which went a long way for diversity. Andra Day became the second Black woman ever to win Best Actress in a Drama for her debut performance as Billie Holiday in Hulu's The United States vs Billie Holiday. Her win was a surprise, with most predicting Carey Mulligan as the frontrunner for Promising Young Woman or other drama veterans like Viola Davis for Ma Rainey's Black Bottom, and Frances McDormand for Nomadland.

Chadwick Boseman posthumously won the award for Best Actor in a Drama Ma Rainey's Black Bottom. In a beautiful, tear-filled acceptance speech, his wife accepted the award saying: "He would say something beautiful, something inspiring, something that would amplify that little voice inside of us that tells us all to keep going."

Her sentiments emphasize the increased importance of recognition for Black actors and films in Hollywood, which are not just for vanity's sake, but necessary to keep getting Black stories told.

Famed director Ava DuVernay said in a social media post after her historic nomination in 2015: "The truth that's not often discussed is that awards play a part in the economic reality of Black filmmakers, artists of color and women creators in this business … Unfortunately, these shiny things matter to those who finance, greenlight, produce, distribute and market our projects."

The conversation is not new, despite Hollywood's reluctance to have it.

Still Work to Be Done … Looking at You, HFPA

Daniel Kaluuya is a mood

The reality of DuVernay's statements emphasizes calls for increased diversity in Hollywood — not just on screen, but behind the camera, in production rooms, and on Award Boards.

The Hollywood Foreign Press Association briefly made a statement to that end but made no announcements of how they were going to actually commit to diversity. The HFPA Vice President, Helen Hoehne, went onstage to say: "We recognize we have our own work to do … Just like in film and television, Black representation is vital. We must have Black journalists in our organization."

An expose in the LA Times showed that the group has literally 0 Black people in its ranks … which is a glaring misjudgment following years and years of movements for diversity in Hollywood, even before 2020's increased urgency.

When will we be free from Lin Manuel Miranda and his ode to slave owners — affectionately known to older white people and theatre kids as Hamilton?

When the nominations were announced, it seemed Hamilton would be a sure winner. The production has notably swept awards seasons in the past, winning 11 Tonys in 2016 and a Pulitzer Prize for Drama.

Subsequently, we have since been subjected to the tyranny of Lin Manuel Miranda and years of having to pretend Hamilton is God's gift to rap music, Broadway, and Black people.

Only one man could stop him: Sacha Baron Cohen.

Sacha Baron Cohen: Thank you for your service.

The Golden Globes is only the beginning of what will surely be an unhinged awards season. Godspeed to us all.

Here's to another month of looking at rich celebrities inside their mansions!

Only Icons in the Building

The Netflix & Chill Era Is Officially Over

Your Fit is Mid! Black Owned Brands on SSENSE to Elevate Your Style